A Bread Salad with Five-Grain Levain! 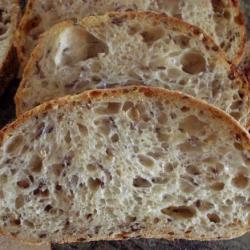 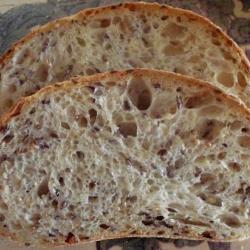 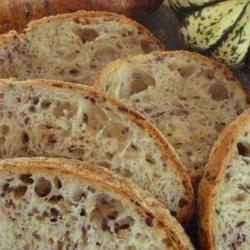 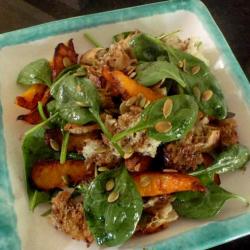 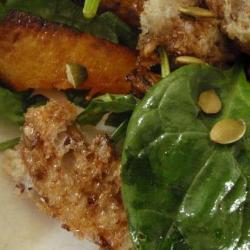 My local fruit and vegetable store recently has a few new varieties of pumpkins. I picked up an attractive looking pumpkin (pictured below) when I was there about a week ago and I asked Con the fruiterer where it came from.  He looked at me as if to say, why, Shiao-Ping, it’s Australian-grown!  He tells me the name of it, but how am I going to remember those foreign names?  I bought one, not knowing what to do with it.  As the week progressed, I felt like making some sort of Bread Salad with it!  What sort of sourdough bread would I make to go with roasted pumpkin?! Pumpkin – pumpkin seeds – grains & seeds bread!!  Haha! Here it is, Hamelman’s [b]Five-Grain Levain[/b] from his [b][i]Bread[/i][/b], page 174.  My second try (the first try was in Polly, our dog’s tummy):

Hamelman’s Five-Grain Levain is an exceptionally moist bread. Depending on how big you make it, a good long bake is normally a good idea, or the moisture retained in the seeds will make the bread dense in the bottom.  I didn’t understand it whenever I read bakers commenting on how moist this bread was.   When I studied Hamelman’s recipe all that I could ascertain from his formula data was that the soakers take the chunk out of the overall hydration (which may initially appear high at 98%) but the hydration for the final dough flour was only 58%!  Now I know the reason why this bread is moist - it is because the moisture retained in the soakers is not easily baked off, as does the flour.  Have you ever noticed that the weights of your dough before bake and after bake are very different? At least a good 12 – 15% difference. [b]That’s[/b] what I meant, whereas the seeds and grains after being soaked are able to retain the moisture in the oven. Notwithstanding the above, I made the following changes to my bread:

This moist bread is perfect for a bread salad because so often the bread dries out once it’s out in the open air (unless you smear it with butter or oil, which I don’t want to do) but this one stays fresh for a lot longer.  It is a pleasing find for me.

[b]I toasted these slices, broke them into pieces with my hands, then[/b][b]tossed the pieces in a balsamic/dark brown sugar/olive oil dressing.[/b]

I made the bread salad for lunch yesterday and had to keep part of it in the refrigerator for a couple of hours for my daughter.  She said it was still very fresh and crispy when she ate it, which shows how moist the bread was.

With this post, I would like to bid everyone [b][color=red]a Happy Holiday Season![/color][/b]  We are going away on our annual beach holiday in the South Coast of Queensland tomorrow.  Much to my delight, there is no internet connection in the place we are staying.  I was looking forward to some beach sourdough baking, but then again blogging can be an all-consuming exercise, and a break can be a welcome recharge.

Many thanks for all the gorgeous breads you have brought us. I know blogging takes a lot of effort. Bloggers are (mostly) such sharing souls. Love y'all!

Not sure... I think I've made this bread before. Funny that you remark that this bread is moist, because, so far, I think ALL your bread are moist. The epic one certainly is. But,thanks for bumping it up. Psstt...how do you change the font colour?

"Happy Hols and Happy Baking to You and Yours!"

Thanks for all your remarkable recipes Shiao-Ping! Graham has been working on a Pumpkin bread recipe that he hopes to get onto the site very soon. (See a photo here - 2nd last at the bottom right).

...and I must be missing something, I don't even know how to change the font color!? All I see is a background colour button?

Have a care free holiday,
Maedi

Oh that sounds so good it would make me hungry for some.  It is a good thing that I'm eating lunch here.

I was just going to say that I really like the background color of this website, clean, soft, and refreshing.

Oh thanks Shiao-Ping. When I was redesigning the site, I was looking for a color that would just make it easy to build around, maybe something earthy, then stumbled upon this color and thought "hey, that's the one".