Note:Sourdough.com is for sale, 100K USD, contact us for more info.

A Walk on the Wet Side 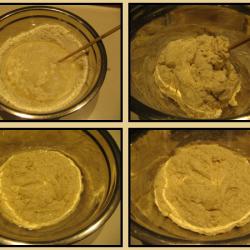 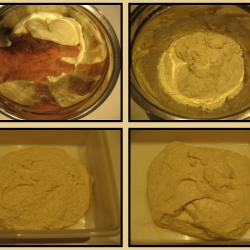 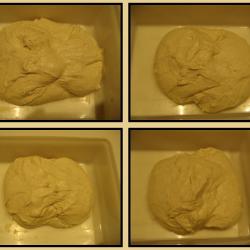 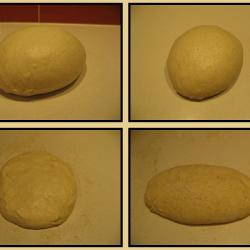 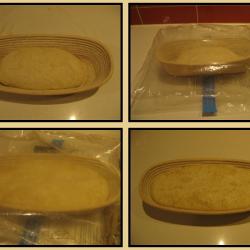 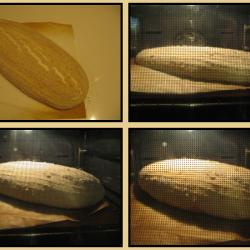 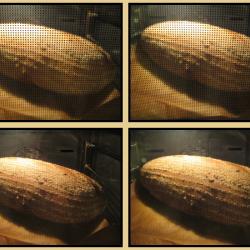 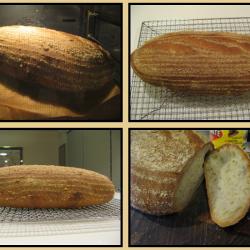 I would have to say that, of recent times, I have become a bit set in my ways.  Standard recipe, standard technique, standard result.  Then I thought, I've become set in my ways, why don't I try something a bit different for once.  And the thing that came to mind, first off, was to venture into working with a higher hydration dough.

Now, my bog standard recipe gave a hydation of 70% which is a nice comfortable level to work with.  For no particular reason, I decided that to test the water, so to speak, I would try moving to 75% to see how it went.  What follows is a bit of a pictorial essay on this little adventure, which wasn't as scary as you might imagine. 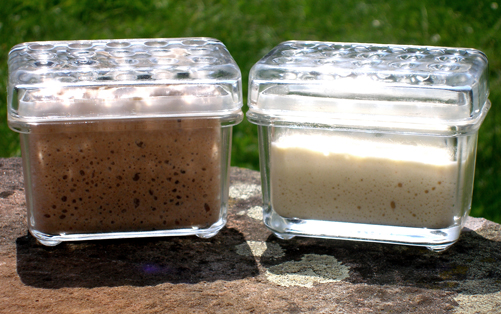 First we have a couple of happy snaps of the genie in its bottle that lives in the fridge from bake to bake and then the nicely aerated levain ready to go into the dough after a night on the bench after a freshen up with some tucker. 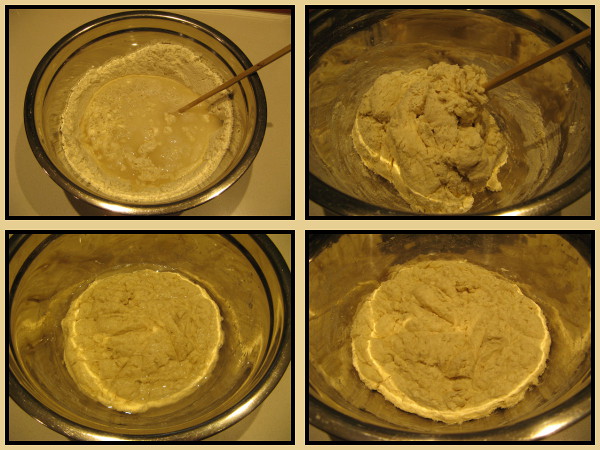 Flour levain and chopstick at the ready very soon results in a shaggy mass that takes a little more work with a bowl scraper to be ready for a bit of a rest (autolyse).  At this stage the hydration is 70% and there would normally be only the salt to add.  The pics are slightly out of order and the one with the salted water is at the bottom left but not to worry. 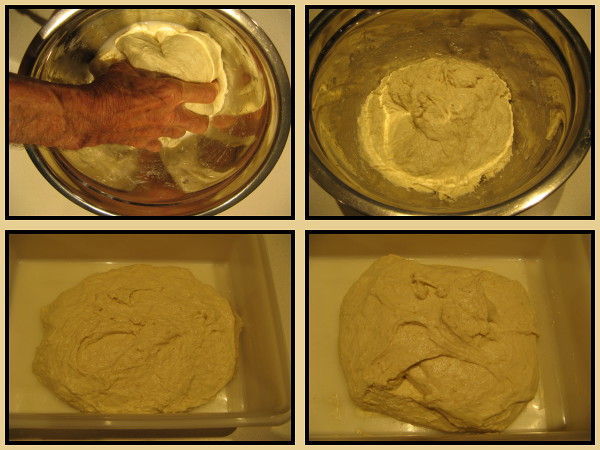 Now here's the fun bit, squishing the extra water into the rested dough.  It's a bit sloshy at first, then it gets a bit sticky and finally it starts to come away from your hand though you do have to scrape a bit off if you really don't want to get dough all over your camera.  Then the dough was transferred into a shallow plastic storage container, given another rest and then given a stretch and fold (inside the container). 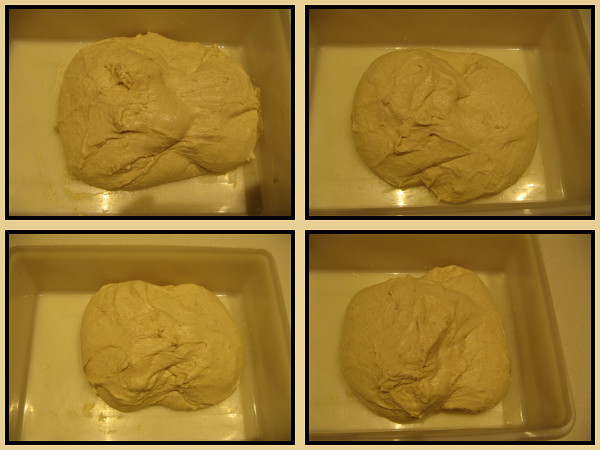 The stretch and fold was repeated at half hourly intervals and you can see that the appearancce and strength of the dough increases as time goes by.  The amount of dough that sticks to your hands also decreases to virtually none at the last turn. 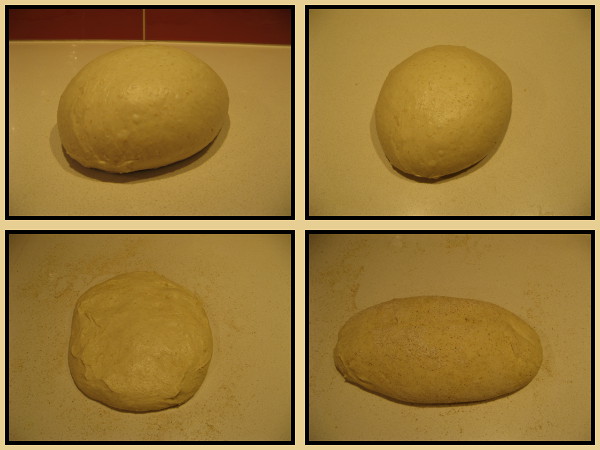 The dough was turned out onto the bench and stretched and rounded into a boule and allowed to relax for a time.  It was then inverted and pressed out into a rough square before double folding and shaping into a batarde. 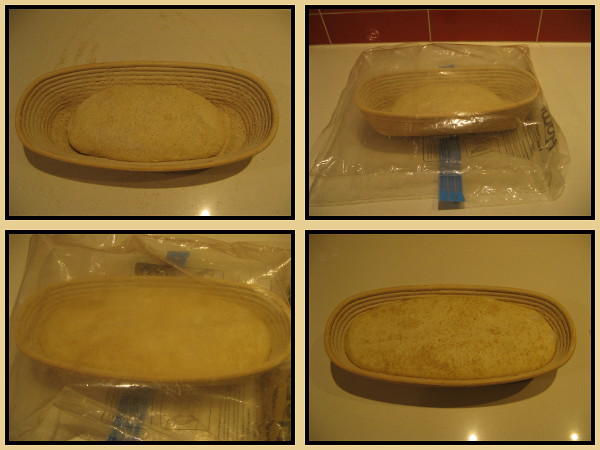 The loaf goes seam side up into the banneton that has been dusted with rye flour and the whole shooting box goes into one of those large vacuum storage bags to bide its time and prove that it is the real thing.  Which it does.  Actually it probably over-proved a bit as I got distracted with another job around the house but that's another story. 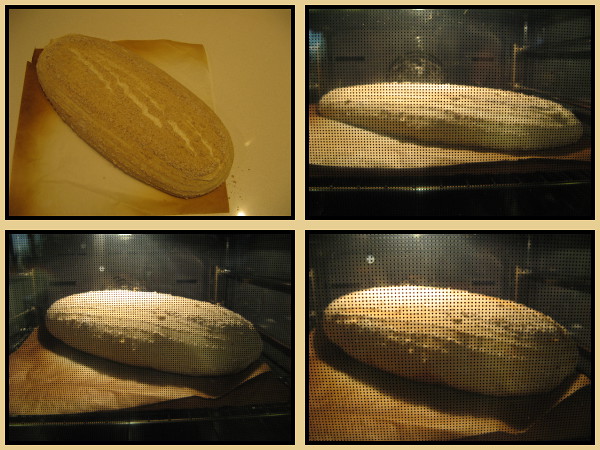 The dough was turned out and given a slashing and promptly into the pre-heated oven onto the baking stone (unglazed terracotta tile).  It did slump a bit, probably due to the over-proving but as time passed the oven spring started to make itself apparent.  As did the dots on the oven door as I forgot to turn off the macro function and it focussed nicely on them instead. 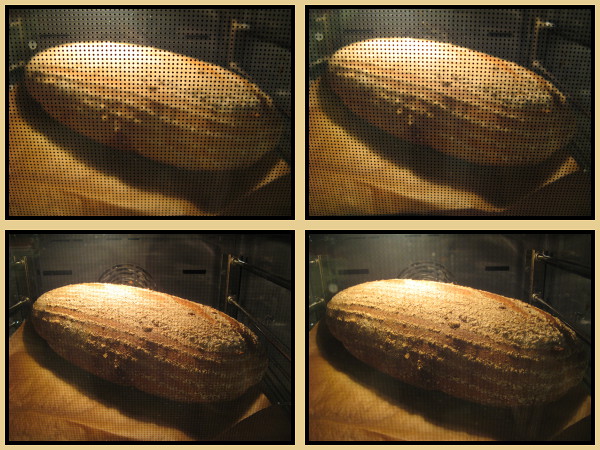 And so the baking continues.  Not a lot to see here except a bit more of the rise and of course the browning of the crust (and fewer spots in the last couple).  All baking pics at five minute intervals by the way. 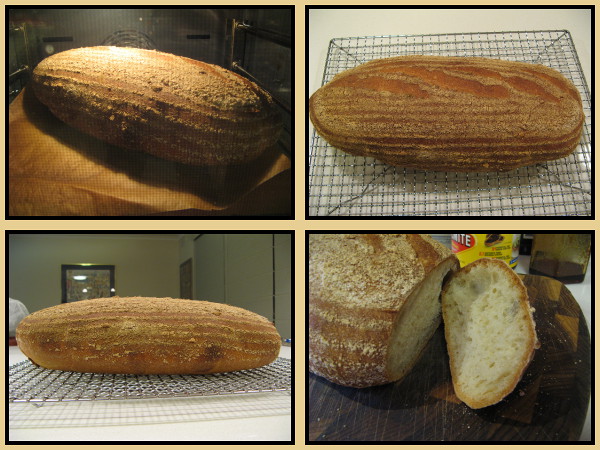 So, there you have it.  The finished product out on its cooling rack and then the proof of the pudding with the first slice ready for the eating.

How was it, you might ask.  First, I have to admit that this was not my very first attempt with this hydration but on the other hand, I haven't done it very often either.  The character of the dough is quite different and has a much livlier feel about it, almost voluptuous, you might say.  And, despite some early concerns about ending up with a sticky mess, it ends up being quite handleable and I am sure that, with a bit more practice, I will get my shaping a bit more under control.  As for the eating, well that was absolutely fine, a nice soft well textured and flavoursome piece of bread.

And, where to from here.  Well, I think this will become a more regular part of by repertoire and I think I will be venturing to try for things like pide and stone-bread in the near future.  I'll keep you posted.