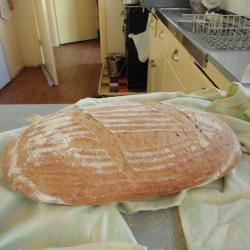 I need help with my sourdough bread as it spreads out when I slash it to bake.

My method : Mix, then fold and stretch every 15mins over 2 hours ( nice bubbles) the put into banneton to proof for 3 hours all looks good until I put on the paddle to slash and it just spreads out side ways and does not rise very high when baked.

These don't show the problem properly.

If you haven't already, read SourDom's beginners blog on this site (link at top right of page).  He gives all sorts of good advice and his Pane francesa recipe is a good simple one but not hugely different to the one you quote (assuming your starter is 100% hydration).

Collapsing loaf is often a sign of overproofing but the time schedule that you give sounds OK though the time will very much depend on the temperature that you are working at and you gave no indication of that.  The crust is a little on the pale side - what oven temperature did you bake at?

The other factor can be the shaping of the loaf and whether you have made a nice tight skin that will help to keep the shape until the starches start to set.  Your slashing could also have an effect and you should try to angle the blade to make an undercut but not cut too deep.  Also for a batard you might think of only slashing say four times at a slight angle to the centre-line along the length of the loaf and not across.

In actual fact your loaf does not look like a complete disaster and I am sure it was perfectly edible.  I think you should persist and practice making it a number of times and you might find that as you get to understand how the dough works and get practice at shaping etc, that the bread will come good all by itself and you will wonder what all the fuss was about.

Thanks for the advice, My temperature is 240cel. fan forced oven and use steam. Some of your comments are true my shaping is not very good and perhaps not tight enough, so will work on that plus the slashing along the bread. Will check out  Sour Dom's.

mazfil, you say "Mix, then fold and stretch every 15mins over 2 hours . . . ."  Can I assume that when you say "mix" that you mean literally that?  If so, then I think your dough is badly underworked.

I make a lot of 72% hydration bread, which is a bit more hydrated than yours, which is 70%.  Furthermore, mine contains 12.5% rye, which slackens it a bit more.  I've only had one batch failure, and that was because I fell asleep while it was baking, resulting in a house full of smoke and two giant charcoal briquettes.

So, back to your problem.  I mix the dough, then cover it and let it hydrolyze for an hour.  Then a combination of kneading and fold and kneading for about ten minutes, or until the dough quits sticking to the work surface and undergoes a profound change to a springy, almost rubbery, texture.  Then I retard it in the fridge for 36 hours.  I shape it straight out of the fridge, put it in bannetons to rise about 75%, slash, and bake.  It goes on a stone, preheated to 500°F, and the temp is immediately turned down to 435°.

The long and the short of it is, I think, your dough needs much more kneading.  Also, when shaping, stretch the top so it forms a smooth skin.

Hope that helps to solve your problem.

Capn Dub has a point that a period of autolyzing seems to help with the dough development.  This is often done without the salt addition and serves to let the flour absorb the water and for the gluten development to start.  The difference in the smell and texture of the dough after a period (as little as twenty minutes would be OK) is quite amazing.  I usually weigh the salt on top of the dough and start folding it in after 20 minutes before starting the stretch and folds after 30 minutes.  During the time, the salt absorbs water and incorporates quite readily into the dough.

With the stretch and fold technique you are trading time for energy in the gluten development and as long as the dough becomes elastic (resists stretching) and can be stretched into a thin film either technique is absolutely fine.  Some people allow only time to do the work for them (no-knead) but I think they miss out on the tactile part of bread-making.

In my experience, the difference between the two techniques comes down to the size of bubbles that you end up with.  Stretch and fold gives larger more irregular bubbles while the more vigourous kneading (shorter time frame) give smaller, more regular bubble sizes.  Some people strive for the latter while others strive for the former.

There is no right way or wrong way as long as the dough is developed properly before shaping using whatever technique you are comfortable with the get the nice tight,  smooth skin that Capn Dub refers to.

Good luck with your projects,

Well this is remarkably similar to my problem I just posted about. I swear this wasn't here when I posted! Sorry

As for your recipe I think you can adjust it a little, these are the basics to a recipe-

Remember once mixing it rest the dough for 3 hours and fold it once every hour. Upon finishing all your resting and folding mould your dough and allow to prove over night in your fridge. The next morning preheat your oven anywhere between 230-260 ْc (depending on your oven) and make sue you give it a decent amount of steam because some of the main key factors of getting a good spring in a sourdough loaf is through high heat and lots of steam.

Yes, poor moulding can play a really big roll in resulting to a flatter out come in your finished product but it is not always the case because I have baked some loaves of sourdough at work where it has had some flat moulding but yet it has come out not to bad in the end. Good moulding only comes through practice, the more you do it the better you become. One tip I can give about moulding is that dont be rough with it, as I always see by many people I have worked with in the past they have treated the dough to roughly and have resulted in an untidy outcome. Remember it does not have to be perfect but it is preferred to be a tight mould so it can have some sort of structure.

Also dont forget upon using your starter make sure it is pumping, meaning that the starter is nice and bubbly popping all around really nice and active this will create a beautiful blistered loaf full of character and flavour.

Also read up about how to slash your loaf because the right slashing also contributes to a good spring in your loaf.

Well, I hope some of my hints have helped you and others and good luck to all in your adventures in artisan baking, keep up the good work and thing your loaf is looking great. But for now artisan bye and dont be shy to ask any questions....

Normally my bread comes out fine, but I made a silly mistake on Saturday with my second batch that out of the blue resulted in bread that was flat like that in the photo above. I can tell you definitely what went wrong as it happened right under my nose. The first batch was fine, but as I only have 2 bannetons I baked the first pair of loaves and had a second batch of dough that had been mixed later proving in the kitchen. Ambient temp was around 23 deg C outside (summer in Sydney!) and the oven had been going full blast to bake bread and cook dinner. The fridge had also been opened many times so was running hot as well. You can guess what happened- the box of proving dough was put on the narrow bench between stove and fridge to get it out of the way during washing up and was left there for an hour. When it was put there the dough was about half way up the container but when I came back an hour later to shape the loaves it was pushing the lid off. No amount of stretching and folding could get the dough to tighten in normal way so I put it in the bannetons and in fridge overnight hoping that it might settle down. It never did! The first loaf baked was borderline OK but poor, the second that had been sitting a bit longer was much worse so it was definitely over proved and this happened in the space of an hour during bulk ferment and became worse during the 40 minutes that the first of the 2 loaves was cooking.

So I would say that yours has also been left too long or at too high a temp as well, as mine looked exactly the same and I know that it was a temperature effect.

Thanks for all the comments, I have adjusted my recipe and technique and I'm now very happy with the results

I'm sure some of us would be interested to see the change :)

I have posted a photo .