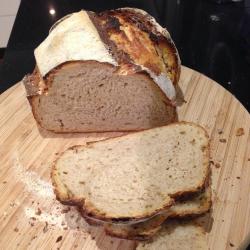 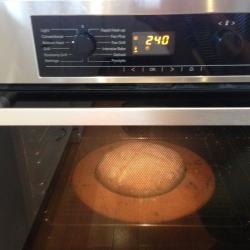 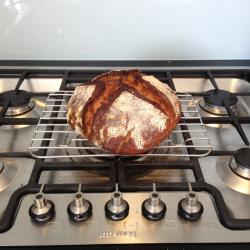 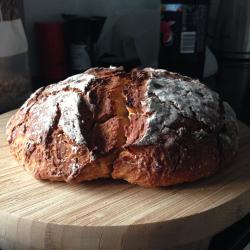 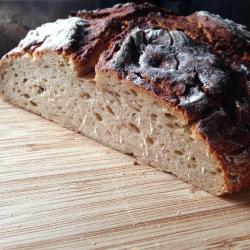 I've been following this site for a while and (trying to) make sourdough since July 2013. My starter seems good and has been going strong since June 2013.

My results vary greatly and maybe I have been greatly varying my process which is causing me issues.

My first loaf was really quite amazing and I haven't been able to reproduce it again. I make round loaves and have been improvising without a proving basket.

My first loaf was crusty, stood as tall as I would expect, had a great crumb but expanded slightly too much for my cuts which only caused the diamond on the top to be slightly off centre.

Anyway, since then I haven't been able to do that again. I make a lot of fairly flat loaves that seem to spread out on the stone in the oven before they have a chance to rise up and then never really do very much.

My process is this:

Thinking back to my first loaf, I stretched and folded it (wrightly or wrongly?) before and after proving, then shaped it immediately and baked it. This seemed to work. It also started baking in a 240c conventional oven which I reduced to 220c after 10 minutes and then 200c after 20 minutes. This had a brilliant crumb, hard, hollow sounding base and crusty outside. I can't remember what hydration it was.

Every loaf I have baked has always had a wonderful sourdough taste so no complaints there. I just need some guidance with my process I think.

Sorry for the long post. I appreciate you taking time to read it and any help you may offer. Thanks.

Have a read of SourDom's beginners blogs on this site.  Lots of useful stuff in these including his Pane francesa recipe which is a good basic recipe (sounds similar to yours and is my standard everyday loaf).  Also have a look at this blog of mine which is done with this recipe.

From what you have said, I would think that you should increase your hydration.  At 70% you might think that the dough is too 'wet' but as it develops properly all comes good.

The other thing is reading you text is you prove the dough for 8-12 hours then shape and bake.  I would think you should be shaping, prove then (slash)and bake.  If you wanted, you could have a pre-ferment stage (maybe another hour or so) after development and before shaping though this is not absolutely necessary.

For your round loaves, a kitchen colander lined with a tea-towel dredged with (rye - wheat can stick a bit) flour is fine for proving.

Good luck with your projects,

Thanks very much for your reply. I noticed a *very* similar topic from about a week ago which I should have seen. I guess you use that top paragraph quite a lot here :)

I dad a look at your blog entry and looks great. I'm happy that my timing is sort of confirmed where your process from mix to oven is about 8-9 hours.

I haven't tried the (non-wheat) floured tea towel yet for proving and that is me being lazy! I have to scrape my loaf out of my proving bowl and it disfigures considerably, hence the reshape after. This is definitely my next change. I have read rice flour is good here too. I might try rye first.

I think I got my process mixed up when read about making dough for more than 1 loaf. They tend to prove the dough in a single unit and then divide and shape it into baskets for a second phase.

Your loaf looks brilliant. I'll give the colander and tea towel a go and invest in a basket if it goes well.

As for 70% hydration, I feel like I am going to have to close my eyes and take a leap of faith in the process :)

Thanks again for the reply.