The other day an Italian gentleman visited my bakery and asked me if I could bake his favorite bread from Milan the Michette (rosette). I had not heard of it. He countered with "I brought you the recipe". This turned out to be an awful google translation of a wikipedia page. I am quite adept at searching the internet and soon found a link to an italian site with the method/recipe that I could understand. He was delighted with the result and has threatened to round up all the  Milanese expats here in Malaysia and get them to order the bread.

Moving on. Since then I have been viewing more Italian sites and found these two gems of women making bread in their homes using the dough trough. I think they ae quite old films and hopefully provide some insight to mixing without  electric powered mixers.

The texture of the dough is so wonderful. Enjoy

I came across this on the web. www.fornosaf.it/

For those unable to build a brick oven it be a useful alternative. They come in gas or wood fired. They use very little wood as part of the design.

What sort of tool did you use to 'score' the loaves in the original post?

Would you mind posting your recipe?

What kind of crumb did you have with this dough?

It was a soft open crumb. They are eaten by pulling of the sections

Although I didn't understand too much of the narration, the ingredients were fairly clearly evident and the methods were well demonstrated.  So, the only thing to do was to make some.

Basically, I left out the yeast and deducted the flour and water content of my starter and leapt right in.  The first stage biga, was probably a bit on the dry side but I decided to hold off and see what happened.  After the 20 or so hours, there were signs of activity, so It was press on with the second stage build.  This didn't go particularly smoothly, mainly because the first stage was so dry and didn't get picked up by the mixer and mostly just sloshed around with the extra water.  Once the water was incorporated after some hand assistance, I added about 15g more than the recipe just to get something that looked like the video.

The rolling and shaping seemed to go pretty much  in line with the video and I followed the time line there as well.  I probably didn't squash the little peaks together as much as I should and after the rest period before cutting they has separated a bit and I had to squeeze them back together.  There seems to be a bit of a knack knowing how deep to cut - it seems to need to be fairly deep but I think you have to be careful not to cut right through - what with the flour and the low hydration dough, they might not rejoin.

For proving, becuase there had been new food introduced, I decided that I would allow a long prove, equivalent to my normal starter peak time - this also fitted with some appointments and other business that I had that day.

The it was into the oven  to bake.  I only used the steam tray and not the spraying shown - I couldn't decide whether the narrative was saying to use both or one or the other.

And the result - really nice buns that you can eat as a pull-apart or cut through to make a sandwich.  The crumb was quite delicate though I didn't get the big hollows and super oven spring that they got in the video.  maybe that will come with practice.

Would you mind emailing me your recipe or posting it?

I can be reached at:  isand66@optonline.net

Your rendition came out beautiful by the way!

My starter is 100% hydration and I have found that 90g of my stock is enough to substitute for yeast when I am converting yeasted recipes.

The recipe from the video called for 400g flour and 175g water for the biga so I just cut those back to 355g and 130g to compensate for the content of my starter.  For my flour and conditions, that was fairly dry and barely came together so next time around I would probably up the water by at least 15g to get a workable dough.

As it turned out, this time I added the extra water to the second stage, so probably 70g water (instead of 55g called up in the recipe) with 4g sugar (I didn't have malt and used raw sugar) and the 40g flour to get what I gauged to be the 'right' consistency.

The salt at 8g was as for the video recipe.

Because of the need to refine the recipe and the technique, I'll hold off publishing more at this stage but if you need more clarification by all means ask.

How many rolls did your recipe end up generating?

Pretty much exactly eight.  There was maybe 10g left over.  I think the pieces I scaled were 80g each.

Appreciate your help.  I will let you know how it goes as soon as I get a chance to try this.

I have to travel for work overseas for the next 2 weeks so when I return I want to give this one a try and will let you know how my version comes out.

Glad to see some interest was stimulated. Your Michette look great. I was told by the customer that they should have holes in them. If you cut down through the middle, there should be large spaces around the middle piece of dough that rises up during the baking. It appears to be an important feature :)

Although the recipe on the video employs yeast, I have found that making a "biga naturale" ( a biga using levain) can create a light airy bread. It is used in the pane Genzano in Daniel Leaders book. In his recipe he also adds yeast, but I have found it is not necessary. In fact here in our warm climate the dough tends to ferment too rapidly with the inclusion of yeast.

I shall try converting more of my recipes to use the biga naturale, it seems to like warmth. Maybe that is why it is popular in Italy.

hello martin, I'm a baker in Milan. You did a good job. The michetta is difficult to do well, because its characteristic is to To be an empty inside, then baked just has to grow much. Sometimes we have difficulty to do it well. This should be the result of the perfect michetta of Milan. 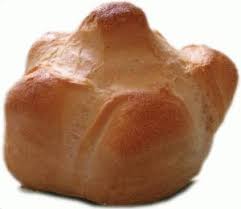 Bye and ,sorry for my english.