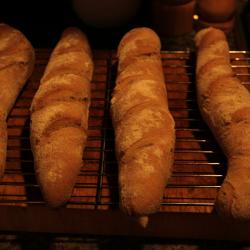 Things didn't exactly go smoothly with this weekend's sourdough baking. It all seemed fine during kneading and proving, and I felt that my attempts at shaping the loaves into batards were better than before. I left them to prove on a floured tea towel. I put the first loaf in the oven at 250oC, set my timer and went in after 10 mins. However, having re-set the timer to 30 minutes, I discovered at the end of the baking time that I hadn't actually turned the oven down at all, so it did its whole bake at the highest temperature (on an oven stone). It has a VERY crunchy crust, and actually seems okay inside as well. Sourdough seems very forgiving that way. It's the one on the right. When it came to the second loaf (nearest to the camera), I discovered I hadn't floured the towel well enough, and the dough was sticking. Then it also stuck to the peel, so I had to shove it into the oven a bit. Hence the rather strange shape.

I have ordered an oval banneton.

Last night I made some baguettes, and included the starter that I was removing to refresh the mother to make the sourdough today. They were a bit misshapen too!

After all, what is a perfect loaf.  Beauty is in the eye of the beholder and it is the flavour and texture that really counts.  I think your baguettes have 'je ne sais quoi' or even 'rustic charm'.

Thank you Farinam. Actually, one of the reasons I like sourdough baking so much is that every loaf is different, I was just a bit annoyed at myself at having nurtured the loaves all day and then making such silly mistakes. It's important to record all these things though I feel!

I'm impressed! OK they are a bit twisty, but who is to say that isn't all right? The last lot I made were a shambles with a tiny little slash and a great big tear at the bottom. I'm hoping for better things next time round.