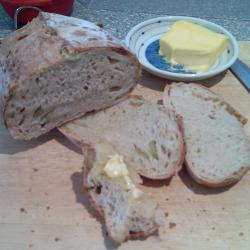 I first made this bread a month or so back, but just haven’t had time to write about it.  I think it is my favourite bread so far in the book and I have made it on numerous occasions.  This is the second “stiff dough levain” recipe in “Local Breads”, and uses a mixture of white, wholemeal and rye flours, that Mr Leader has determined to be as close as possible to the Type 70 flour made from winter wheat used in Alsace.

The recipe doesn’t call for any retardation steps, but I generally use at least one, as it is more convenient for my bread making process.  As Mr Leader mentions in his foreword to the recipe, the longer the dough chills (retards), the more chance the bacteria present will have to produce acids giving it a more tangier/sour flavour.  I do like the result from an overnight proof or bulk fermentation.

The stiff dough levain build uses 45g stiff starter, 50g water, 95g white/AP flour and 5g wholemeal flour.  My starter generally takes about 7-8hrs to reach readiness for baking (current air temp about 20C give or take), so for my latest batch of bread (currently proofing).  I fed up my starter yesterday morning (for a double recipe), and here it is before making the dough last night - I did press it with my finger prior to taking the photo so it has started to deflate!

I tried to take a photo of the bubbles in the starter dough, but don't think I was overly successful (Phone is my only digital camera):

retarded O/N, folded, shaped into approx 500g batards, proofed in fridge for about 3hrs then at RT for about 1.5hrs - or whatever happens to suit at the time (oven heating up as we speak!).

I have made this as is numerous times only varying the fermentation, proofing, retardation steps according to mood and need.

I have made a linseed variation with 100g linseeds soaked in 227g water o/n (water in dough reduced to 235g), which was SPLENDID!

Had insufficient WM flour on one occasion so used the 180g I had and upped the rye weight to compensate.  Last week I had forgotten I had no WM flour so used buckwheat instead!

Made a “fantasy” levain (as they call it in the book) and rolled the dough out flat spread it with pesto and toasted pine nuts,

sliced it in half lengthwise then twisted into a “Russian braid”

and baked it in a tin – a bit oily from the pesto, and very green, but quite tasty.

Think I wouldn’t use pesto again as made the bread slightly dense, but I think feta, pine nuts and sun-dried tomato would go well.

Today’s “fantasy” levain includes celery and Parmesan along the lines of Graham’s celery and Romano loaves.   I made one loaf "fantasy" and the other 3 plain (double recipe for hungry demanding friends) - here is the celery loaf (left) and one of the plain loaves from today, slashed and ready to go in the oven:

The celery/parmesan loaf didn't have such a great gringe, but by hokey it tastes fantastic!

Couldn't even wait for it to cool completely, sliced, a lick of butter and down the hatch with a nice glass of chardy!  Thanks Graham!  Next time will have to get in some Romano instead of the parmesan.

Normal 0 I fully intended to soak some whole-grains to add to today’s batch, but forgot to soak the grains when I fed the starter, so will save that for the weekend.  So many variations, so little time!

That combo of white flour with WW and a touch of rye is a classic. Bet the flavour was beautiful, and your variations look superb.

Beautiful! I may try the linseed version (I usually call them flax seeds but they're the same thing) myself sometime!

I do make a yeasted oatmeal-flax bread quite often, but I always grind the flax. The soaked but unground flax looks like a great addition to a sourdough loaf!

Thanks guys - I'll be making this one over and over again.

Linseed/flax seed loaf was great - I just love it how they soak up all the water and go into a "jelly"!  Nice flavour (even though my loaves were overproofed) and good and healthy, especially for us women apparently.

All your bread looks great. I will try this combination this weekend but I think I might have a go at Graham's other Companion recipe for the pumpkin bread. It looks really interesting and might work well with 70/24/6 mix. Just gotta work out how I can slow roast the pumpkin in this hot weather. Maybe I can do it in the pizza oven out side. Anyway I love all your great variations on a theme, It's pretty much the way I have been going with my bread lately but with a 80/20 mix of white flour to wholemeal plus some multi grains added when the mood takes me. Cheers Johnny

Must put these on the (ever-increasing) list to try. The 'russian braid' looks great too - even if you thought it was dense. Thanks for posting :)

Well i tried another couple of pains de fantasie today.  After LD mentioned his garlic loaf, I was encouraged to make a caramelised onion SD (which has been sitting on the corner of my mind for some time), so today was the day!  Also a friend has been most upset that I've steered away from making fruit bread, so I thought I'd stay in her good books and do a batch of that as well.

So it was a triple batch of dough that was kicked off yesterday morning, made the dough late last night and put in in the fridge for its bulk ferment (at 11.15pm).  I also put about 50g currants and 10g raisins in some water to plump up while my dough fermented - for fruit loaf.

This morning I sliced up 3 onions (2 white and 1 red, all medium sized, and for no other reason other than these were the only onions in the house), and sauted them in olive oil.

Once they started to colour I had a couple of teaspoons of sugar and a slurp of balsamic vinegar, and some chopped fresh rosemary.  Then left it all to cool.

At 9.15am today I took the triple batch of dough out of the fridge and gave it a fold.  About an hour later I divided it into 3 approx 1kg portions.

On the 2nd stretch and fold today (about 10.30am), I added in some onions to one portion of dough and folded them in, then added in the rest on the 3rd stretch/fold.  I make this sound really easy, but in fact it was a bit of a nightmare.  They were quite wet and didn't really want to become one with the dough.  They were in one layer and the dough was in another, but I made the best of an awkward situation and perservered.

Likewise the fruit and spices.  On 2nd stretch/fold I sprinkled over 1tsp cinnamon, 3/4 nutmeg and 1/2 cloves, this aslo didn't want to become one with the dough after folding.  On the 3rd stretch/fold I added in the drained plumped up fruit, and the situation got even worse - see above problem with onions but even more so!

At 12.30pm, I had to cut each portion of dough in half and pre-shape them.  Holy smoke this was tricky!  I had filling falling out all over the place.  You could see the layers of dough and filling from each fold, and I was thinking there was going to be big pockets in the loaves and it was looking like a potential disaster.

I'm amazed I managed to get them looking like loaves at all!  I thought perhaps I'd added too much filling, but not so.  All the loaves resting before final shaping - left to right = onion, fruit (you can see the marbling of spices on surface of front loaf), straight .........

At 1pm shaped the fruit loaves into batards, onion loaves into boules (very ugly boules at that, as they wanted to get up and run away!  So I pretty much just tipped them into the floured baskets) and let them proof (along with a couple of straight unfantasied loaves) for about 1hr 20m.  Very warm here today and I think I might have nearly over done them, as got distracted sitting outside in the brilliant sunshine reading the Herald and drinking tea!  Baked the straight loaves first and put the others in the fridge until it was their turn - hopefully this would slow them up and avoid an overproof!

So hours later after 4 consecutive 40-45 minute bakes I was finished - plenty of time to lounge around in the hammock enjoying the weather!  Took said loaves around to a friends place, and she didn't even laugh when I pulled out my phone to take pictures of the crumb!  She just called me a saddo!  But she was VERY happy with the bread, so let her scoff!

Fruit loaves and crumb (the spices are sort of marbled through the dough.  This could be avoided by adding them when mixing the dough at the start, but since I was making one big triple-batch, this wasn't possible)........

No disaster at all!  The loaves were wonderful!  the raisins in the fruit loaf were nice and moist, I haven't soaked before using before and even though it made the mixing in difficult, the end result was worth it.  The aroma of the cooking onion loaf was FANTASTIC!  My neighbour even called over the fence to ask what the heck was I making as he had to have second lunch to combat the hunger pangs!

That's what I call a fun day in the kitchen, reading the paper, lying in the hammock, iced tea - no sweat and all delicious!  Happiness is indeed making bread (plus sharing and eating it with friends)!

Your  breads are amazing,

I thought I was getting close to a reasonably great  bread with mine until I saw yours..........wow !!!!!!!   The width of your slashed bit is amazing, I wait for that day when I get the oven spring that gives you that fabulous "bread smile".  Now that I see your bread, particularly; the pic of the 3 loaves together I now realize what and "ear" is. I have seen it mentioned in some blogs and couldn't quite work it out .  I originally thought when my badly shaped loaves bulged at the side in a D shape.......I had successfully got an ear

Please keep on posting your pictures and ideas, hope you have those hands insured.

Nice bread, Karen - I enjoyed making this one. Didn't want to add my pic to your beauties on this thread - they deserve to stand alone! So, posted here.

Thanks for the recipe and inspiration.

You are most welcome - thank Mr Leader not me!  You loaf looks WONDERFUL! and reminds me that it's Friday morning and I should go and feed my babies up for some loaf making tomorrow!

I couldn't post a comment on your blog as there was no option to do so, so sorry a bout commenting on it here.  I agree with you Ross, it's definitely going to be an often baked loaf in my house.

...and thanks for pointing out that 'Comments' had been disabled in my post. Dunno how that happened, but I've changed the comment settings now.