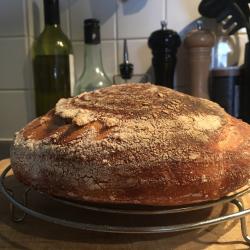 I'm new here, but I've been scouring forums for an answer to my question and haven't found one so thought I'd ask directly.

I've made a few loaves using a recipte based on the Tartine country loaf (autolyse, bulk ferment, shape, retard overnight) at 65% hydration. My dough doesn't expand noticably during the ferment phase or while in the fridge overnight, and when I bake I get a dense crumb with a layer of air above (as per the pictures). My question is what is causing this? Is it possibly that my starter isn't active enough? Am I overhandling my dough? Is it under/overproofed? I just wonder if its simply a case of my starter being a bit slow and everything else is on track, then I'll know to focus on that (or vice versa). Any tips would be hugely appreciated!

First, the big cavity is most likely due to a fault in shaping the loaf where the dough has not rejoined after folding.  This might be due to too low hydration or drying of the surface during the pre-ferment stage or to excess flour used during handling.  The trapped air plus gas produced by the fermentation that migrates into the gap during proving expands during baking to give the characteristic 'cavern' with little cross connecting structure.

As for your lack of rise, there are two factors, temperature and time.  You really do need to get significant rise during proving to get a good loaf and, provided that your banneton if properly sized for the amount of dough that you are using, it should just about reach the rim of the container.

You don't say what sort of room temperature you are working at but my first test would be to leave the loaf out on the bench rather than put it in the fridge.  At worst you will end up with an over-proved loaf, at best you could end up with a great one.  If that time turns out to be too long then you will need more time at room temperature before or after retarding in the fridge to get to a satisfactory point.

You can get some idea of how much time you might need at room temperature by noting how long it takes for your levain to reach its peak.  If it takes, say, eight hours, then you should count on at least eight hours from making the dough to being ready to bake, at the same sort of temperature.  If it takes twelve, then twelve from go to whoa (about).

This is always a problem when following time-lines given in blogs and recipes.  The time depends very much on your starter activity and the temperature you are working at and I think the authors sometimes forget that they are working in an environment, controlled or otherwise, that is not seen by the home baker in his kitchen.

Farinam, thanks so much for your advice! It's very cold in our apartment at the moment (Melbourne winter) so a benchtop prove will probably be the way to go. I'll just need to work on my shaping.