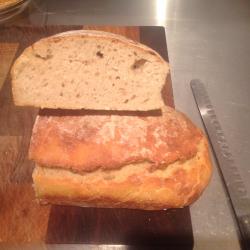 Can anyone give me a clue as what went wrong with my ist attempt at baking sourdough, bread was quite heavy and had a  crack running around the outside near the top, my first thoughts were the sourdough was not strong enough or the proving temp was not hot enough. Any suggestions would be appreciated

There are so many things that affect the outcome of your loaf that it is difficult to say without more information:

temperature and time of proof, etc

My first guess would be it didn't proof quite long enough so the oven spring "splt" the loaf.

With more information some of the old timers here could probably narrow it down some more.

Elkhorn is right there could be a number of factors involved that more details might help to define.

However, looking at your pictures a few things suggest themselves.

Firstly, I suspect that your hydration might be a bit low or you have used a lot of flour when shaping your loaf as I can see folds that have not sealed and you obviously did not have a nice tight smooth skin on the loaf before you put it into the tin.

I think I am right in assuming that the loaf was baked in a tin.

When a loaf rises during baking, it will split at a point of weakness or of high stress concentration such as a sharp bend or corner.  This is the idea of slashing a loaf as it gives a ready made line of weakness and allows the baker some more control over how the loaf rises and expands.  In your case, the point of weakness was at the change in curvature between the tin and the top of the loaf.

It also appears that you have slashed the top of the loaf but diagonally to the centre-line of the loaf.  This makes the loaf want to expand more in the longitudinal direction and you might be better to slash more along the centre line at a slight angle so that the slashes can overlap slightly.  This will give you a greater component of lateral expansion and vertical as well.

Another likely contributing factor is that the skin of the loaf dried out and formed a crust too quickly preventing the loaf from rising in baking and then breaking along the aforesaid line of weakness.  This could happen to some extend during proving if the environment used was too dry or the loaf was not well enough covered.  Or it could happen in the oven and might be helped by the introduction of moisture in one form or another.  Some use a tray of boiling water in the bottom of the oven, some spray water from a spray bottle at regular intervals and some toss in ice-blocks.  The latter two cause greater temperature fluctuations and heat loss.  Generally steam  should only be used for the first 10-15 minutes of baking to give the crust time to dry and crisp after rising is complete.

Hope this helps but stick with it.  I have found that the best help of all is practice.

Thanks again for your help, I will keep trying and hopefully have some success