Sourdough in the Wood-Fired Oven 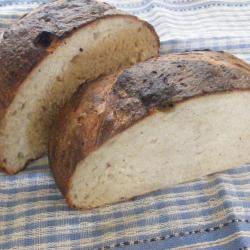 After cooking a beer-can chicken with a small fire, I loaded it up with more wood and got the oven really hot. Unfortunately it was difficult to determine the temperature and I put the bread in when things were too hot. The sourdough fruit bread came out OK, although the bottoms were slightly burn and the dough was a little under-done. These were big loaves, this one is 1.2kg:

I also made the "Norwich Sourdough", but they went in first and really copped too much heat:

The lesson learnt is pretty obvious - let things cool for longer! But I can't wait to have another go at it!

YUM! Looks like I'd be joining you on this learning curve. Will bake next week. Hubby just made an inner door out of tropical hardwood today. We'll soak it in water before stopping the inner door to bake bread. So exciting, isn't it?

Yes it is very exciting :)

I also made the door from hardwood, and soaked it in water. It still got very hot - lots of steam coming off the door, but it didn't burn. I just need to get better at estimating the temperature - will try the test of being able to hold my hand in there for 4 or 5 seconds.

Good luck with yours!

I have heard that bakers that use wood fired ovens judge the temperature by put a sheet of paper in the oven.  They know how hot the oven is by how fast the paper catches on fire and burns up.  Do you think you could do the same thing?

Thanks LeadDog, I expect that would work well, provided I knew how long it should take. I put my loaves in on parchment and it turned brown quite quickly, which was when I first realised things were too hot in there.

Loaves look pretty good, and not at all indicative of too hot an oven, except for slight scorching on the surface, which might mean that the dome surface (but not the heat stored in the bricks) was too hot.

There are many ways to tell if an oven is ready to bake, all measuring slightly different things.

Experience with your oven is easily the best way.

the oven turning white: the soot burning off the walls and dome

Best of all is use one or several thermometers. An IR Laser thermometer will tell you the surface temperature,

but this can be misleading, especially if the fire is still in the oven.

A conventional oven thermometer will tell you air temperature. However not many domestic ones go hot enough (I've melted a few) and its also misleading

Thermocouples embedded in the brick will tell you the temperature at that depth.

The point is that brick conducts heat quite slowly - thats why its a good heat store. Thus you need to know both the surface temperature - to use a rough water analogy that corresponds to the depth of water in a tank, and the amount of heat in the brick - the temperature at depth - corresponds to the amount of water or crudely the area of the tank. Its also why firing with a small fire for a long time is better, and why you must shut up the oven after firing and before baking to let it equalise before believing what the laser thermometer tells you. During that time the surface hot from the fire will cool and reflect the heat in the bricks.

So do what you are doing now, but shut up the oven for an hour between firing and baking