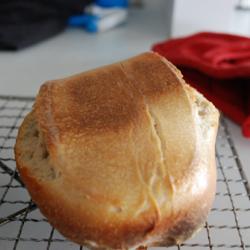 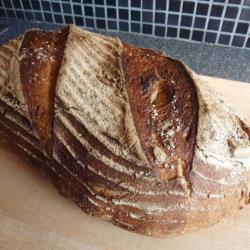 I started a thread last week asking advice about what to do with my starters. I inserted it into the starters and levains section. There was not much response but I thought I would write to you all again in a different section incase I could help anyone else having similar problems or questions about their starters. The starters were about three weeks old, actively doubling every 5 hours but smelt vinegary and on a couple occasions a bit like nail varnish remover.  When I made a loaf from each they were not very tasty at all, tasted a little too vinegary. Well since then I threw away the least active of the two starters. Upped the two refreshes a day to three until activity slowed slightly, basically every time it doubled and reached it peak I refreshed. That really helped the smell of vinegar.

I also added a sprinkle of some malted chopped rye pieces I bought to sprinkle on top of my loaves to look pretty. Anyway today I decided to try and make a loaf. I followed the Norwich rye recipe but used SourDom tutorial methods for kneading and folding. I am really delighted with the result. The slashing is still terrible so the loaf did not pop out its skin but there are lovely airy holes, the crust was lovely and the taste delicious. I can now see why you all rave about sourdough bread. Things I have learnt so far is to listen to your starter, if it's active and it starts to smell vinegary, refresh. If you don't want to have very sour bread then keep your starter fed and active. I think I must check and smell starter ten times a day and the smell is complex and constantly changing. I noticed a difference in the texture of the bread from the early vinegary one and today.

When it was vinegary and I guess acidic the bread had a shiney look about but todays looked much more like traditonal bread and was soft. Anyway, to all those who are struggling a little and are wondering if they should bin the starter and start again, just give a few more days and keep feeding it to optimise conditions. Hope this was some help to someone.

It sounds like you are getting the hang of it. Your bread is looking good. Your starter is still quite young. It will mature and the flavor of your bread will get even better than now. In my experience, my starter, which I keep at 100% needs to fed twice a day. More if it is warm in the house. Otherwise it gets that sour smell or nail varnish remover (accetone) smell. I killed my first starter attempt by putting it in the warm garage feeding it only once a day.

I have also found that the sour flavor in the bread is more a result of how you ferment your dough vs how you feed your starter. Starving the starter to produce a sour flavor tends to be at the expense of the health of your starter.

As for slashing, I still struggle with that one myself. It has gotten better with time. It can be frustrating trying to get it down when I only bake once every week or two. Still, I love making the bread! It's it's much better than what I can buy at the market. I'm sure you are finding the same as you loaves improve. It still seems a little like magic to watch the loaves rise and spring in the oven.

Thank you so much for your help. You're right about feeding at least twice a day or more in a warm house. After a warm spell last week when I should have refreshed 3x a day and only did it twice a day my starter turned vinegary again! But thankfully after 4 days or so of intensive care its back to smelling nice again.

You're spot on with the sour flavour. I've focused on making the Norwich Sourdough loaf to try and experiment with timings etc. If I start a loaf in the morning its ready by dinner time and its lovely fresh, soft and has very mild flavour. In an effort to make a loaf ready to bake in the morning, its left to prove overnight in the fridge. It produces a loaf which is definately more sour. I prefer the flavour of the former but its not soft enough the next day for sandwiches. Both, however, are lovely toasted.

As for my slashing its definately an artform and I need lots more practice! Oven spring, its amasing. One minute its flat then you look again and its away. Fantastic!

I never received your first comments seeking help Chel.  I usually get them in my email.

I've had my starter now for 2 years, and in the beginning, the advice that was given to me was this.

Throw away half on the third day, and replace that half with fresh flour and water, twice a day, until it doubled in size.   I never got an acetone like smell, I got a beer/banana smell to my starter,  now after 2 years, it just smells nice and sweet.

There was a small window of time, where my bread was real sour [I like it like that] but on its own it returned to nice and sweet.    I think it has to go through the phases, as it matures.

What I do, is when I use my starter I take it out of the fridge, and take half of what the recipe calls for, and then feed it the same amount in water and flour, deducting from the what the recipe says to use.

I would take out 90 gr unfed starter and feed it 90 gr water and 90 gr flour, letting it sit for over night.    deduct the 90gr water and flour from the totals of the recipe.   I replenish my starter with 90gr flour and water, let it sit on the counter until it doubles then falls, then put it back in the fridge.

Thank you for taking the time to reply. It was really helpful advice. I have stored a portion of starter in the fridge as backup. Its replenished weekly. My main starter I have for the moment keep at room temp and I feed it twice a day. I have been fortunate to be baking about five days out of seven so haven't wasted too much flour keeping it at RT. At the moment touch wood it's smelling delicious and its making lovely bread. When my baking slows down I may just be brave enough to attempt to store it in the fridge then follow your advice.