I think I'm getting better at this 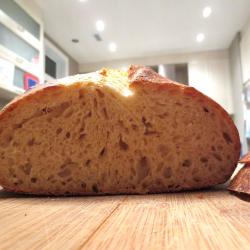 I still haven't found a way of buying the bread flour I'd like to buy (the mill is located some 150 km from here so I'll have to plan an expedition; and they sell it in 20kg bags, that's a lot for me!) But I've decided to try a bag of all-purpose non-bleached organic flour from the local supermarket, nothing fancy really.

Following the shortage of good quality rye flour in the region, I've managed to transfer my sourdough culture to whole-wheat flour only. I almost killed my culture in the process, but thanks to the 2 "backups" I had made in advance (stored in the fridge), the last of my 3 attempts worked just fine. The two others developed a bizarre farty smell (more like hydrogen sulfide); I'm pretty sure it would have gotten away after a few days because it was really subtle, but I simply kept the non-smelly one and dumped the 2 others.

Today I've baked a really gorgeous looking bread (in my not-so-humble opinion) with an amazing oven spring, a very wide grigne and nice crust blistering and coloration. Here are a few details of the recipe:

I mixed the sponge in the morning, and let it rise for 6 hours (it more than doubled volume). Then I mixed with water, whipped, and added the flour and salt. I use a large silicon spoon, which works perfectly without getting stuck in the dough.

Autolyse 30-40 minutes. Kneaded on my quartz kitchen counter without adding any additional flour (it works just fine on a cold counter, and won't stick if I don't let the dough stand for more than 1 minute). Kneaded for about 8-10 minutes, don't remember. Then phone rang at some point.

Proofing 4 hours, with double fold every hour. It rised a bit, with some bubbles visible under the surface. It was very silky and got damp on the underside, but never sticky.

Then I dusted one side of the dough with flour, and delicately put the dough in a metal bowl lined with a kitchen towel. For proofing I simply add a damp towel at the top of the bowl and put a metal lid from a pan to hold it. I decided to let it stand a total of 3h45 at this point, because all my previous breads were all underproven.

I pre-heated the oven at 450F for 2 hours with the pizza stone in, then at 500F for 1 hour with a pan filled with water.

I did an "angled" slit, relatively deep, at the top of the dough, which had a roughly rectangular shape (I'll try to get a more "standard" batard format next time). Reduced the heat to 475F and put the dough on the pizza stone.

After 5 minutes it started rising and even though the slit had "solidified" it was a weak point and so the bread expanded by cracking along the "rift". It kept expanding all the way; I reduced the heat to 450F after 20 minutes, and removed the pan with water at 25 minutes. Reduced heat to 425F to prevent the undercrust from burning at 30 minutes. Total baking time is 40 minutes.

For the first time I've heard cracking noises coming from the bread when it was cooling down. I guess it's a good sign. I'd like to thank those who have offered me some excellent advices over the last few days. I'll post some more pics when the bread has cooled down and I slice it.

EDIT: Just sliced the bread and tasted it. Added a pic showing the sliced loaf. Both the crust and the internal structure are great. I've calculated a hydration level of about 65% for this bread. Next recipe will be at 70%.

There'll be no stopping you now.

On the flour front, I just use a supermarket flour (bread) and that is absolutely fine.  Comes in 5kg bags which is much more suitably sized.  A 20kg bag could get a bit stale unless you were doing a lot of baking.  While freshly milled, organic etc etc would be nice, I think you also have to be practical.  In our neck of the woods, Health Food shops have a range of flours in smallish packages and if they have a reasonable turn-over it is generally pretty fresh.

On your oven prep, I would certainly cut down on the pre-heat time - an awful lot of energy going to waste there I would think.  I preheat for an hour and if I am adding steam, I put in the water tray at the start and then add boiling water five minutes before the loaf goes in.  More than enough to humidify the oven and an hour is absolutely over the top.