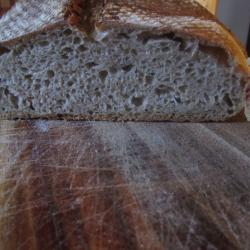 My question is about the protein in flour and its effect on my starter.

My starter is 5 month old. I used to use plain flour from my local shops, at 10.1% protein. I always read that it was low and to get all round better quality bread, I needed to find a plain flour with higher content to both feed my starter and use in the dough.

I recently bough an 11.8% protein plain flour and have made four loaves with it. the quality of my loaf has improved, but I am worried about one thing: as I only feed my starter every 2-3 days, I have noticed that a clear liquid appears on the surface. Should I worry about it? The smell is more yeasty now, but not unpleasant. Also the bread is more sour.

The liquid is not a problem.  Usually referred to as hooch, I guess because it is likely to be a bit on the alcoholic side.  Some people drain it off others just mix it back in.

Absolutely not related to the protien content of the flour that you feed  - more that the food supply has run out.  You don't say whether you are bench-top or fridge but if you are bench-top and don't want to refresh more frequently, then storing in the fridge is one way to alleviate food shortage.  Won't harm your starter though, it goes dormant rather than hungry.

thanks for your answer. my starter is not in the fridge, though I am going to move it in there next week. on the bench I know exactly how much time from the feeding I need to wait to use it to its optimal activity. I need to make bread for my wife and her group this week, so I don't want to take a risk with it. Perhaps I will only put a portion of it in the fridge to check out how long it needs from feeding.

a couple of questions regarding this issue:

1. will the bread flavour be affected by the fact that the starter will be in the fridge?

2. do you use the starter straight from the fridge, or do you leave it to come back to room temp?

Most Cases the best option would be to feed the starter directly after you've baked and place it into the fridge.

All the fridge will do is slow it down a bit, so instead of feeding it daily you can probably get away with feeding it every four or five days.

The clear liquid is what happens (generally) when it's starving, so you've missed out on a couple of feeds and the liquid appears, scoop that liquid out, feed it and mix, do the same the day after.

they're pretty indestructable, but tempermental...

not much change in my experience, but I keep my starter to a small mix, if you keep a litre of the stuff in a fridge then I guess it'll suck up some of the smells of the fridge (any1 else want to chime in?)

some books ive read say to use a air tight container, ive been meaning to film what happens if you do that with a tupperware containter i use for baking (after a couple of hours there's a huge pop) so I'd stay clear of airtight containers and either use gladwrap or a lid with holes in it.

Digital is right.  What I do is that the night before I bake, I take 90g out of my stock jar (100% hydration) into a 500ml Pyrex jug.  Add 45g of flour and 45g water, mix cover with GladWrap and leave on the bench overnight.  At the same time, I add 45g flour and 45g water to my stock jar, mix and put straight back into fridge.  I have left it in the fridge for at least four weeks while on holidays and probably only needed about two feeds for it to be back full tilt.

My stock jar is a wide mouth bottle (square section with rounded corners) with a plastic lid that I leave on loosely.  I am not aware of any transfer of fridge odours.

Because activity varies with temperature and I generally work at room temperature, I use the time that the loaf starter takes to reach its highest rise in the jug a a guide for how long from mixing dough to baking time (though I still check with the good old poke test).  This only applies for 'straight' recipes (starter,  flour, water, salt).  Rich doughs are a slightly different kettle of fish (taking quite a bit longer) and I generally rely on the poke test for those.  Even then, experience counts for a lot and you soon get to know what's right.

This is only my view, but I think the bread flavour has more to do with the dough development and proving times than with the taste or storage conditions of your culture though obviously there might be a different balance of bugs for a cold stored one vs a RT stored one.

out of the fridge my starter takes about 6 hours to rise then it starts to fall. I have a 2 litre glass container with a lid - no holes, but the lid doesnt close completely airtightly - so a maximum of 1.5 litre of starter.

The first starter that I saw was from an English show called River Cottage - my wife had a thing for the shaggy looking host, Hugh Farnely Wittingsomething... their starter I had noticed had a fair amount of liquid at the top.

so a further question:

my dough seems to rise more when proofing overnight in the fridge than it does in the 5 hours or so of bulk rising at room temp. is that ok, or should I leave it to bulk rise longer? is there any glaring mistake that anyone can see from my method or my mix? does anyone have a suggestion on how to improve on my loaves?

ps I will try to post a photo of last week's loaves so you can see what I get with this method.

The cover of your starter doesn't need to allow air in - the beasties are anaerobic, and indeed I keep my starter covered so undesirables don't enter. As for flavour, you will tend to get more of the acidic flavours from fridge-kept starter, but if you take out a small amount and build it up when preparing to bake, you won't notice much difference since the refreshed starter will grow the dormant beasties at different proportions to your refrigerated culture. I also stir the hooch back in rather than pour it off, to maintain a uniform hydration in my starter culture.

As for your question about why the dough rises more in the fridge than out - it sounds like you may be overproofing at room temperature. 5 hours sounds like a long time for the bulk fermentation stage - I wouldn't expect more than 5 hours total proofing time over both bulk fermentation and final proofing, unless you're in a very cold climate.