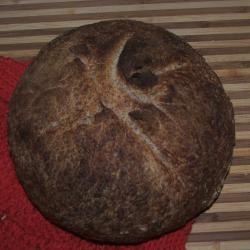 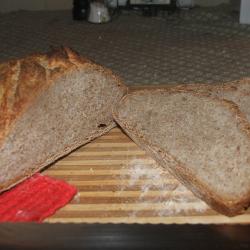 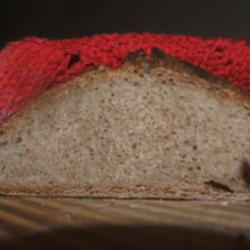 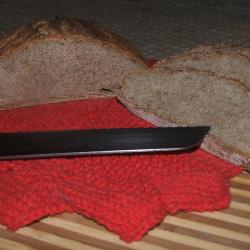 All kidding aside, guys, what do you think?  I used a 100% rye culture for this that I grew last week.  It's from Daniel Leader's book, Local Breads, which I am coming to really, really treasure.  The recipe is also his.  It's supposed to be his Czech Country Bread on pages 308 - 310; it's 80/20 white/rye with about a 60% hydration.

This is one of my first experiences working with a rye sourdough, and the recipe itself contains a much higher percentage of rye flour than anything I'd worked with before as well.  Is this what a bread like this is supposed to look like inside and out?  Or should the crumb be much more open?

I do apologize for the crappy photography -- a shutterbug I am not!  But what I was trying to do was give you guys some idea what the crumb looked like once I cut into the loaf.  Overall, it's a firm bread but not overly so.  The crust itself turned out quite substantial while the inside is soft and chewy (but not gummy).  It would be terrific for dipping into soups and sauces, and it's firm enough to hold up to serving as a "shovel" for foods like cabbage.  If I was recreating a medieval feast, I would have no trouble cutting it in half lengthwise and using it for a trencher.

The dough for this thing was really, really wet and loosey-goosey but became easier to work with as I kept kneading.  (And no, I don't have a machine to do this in, so yeah, it's all by hand.  In some ways that's great and for others, it stinks.)  I am hoping that I didn't knead in too much flour during the development process.  Am I on the right track here?  What suggestions do you guys have for me?

Really looking forward to hearing back from you all :D

Sorry - just channeling some of my old school reports :-)

Seriously though, with 80% white flour, I'd have thought that you might achieve a better crumb structure and a better shaped loaf than that.

You said that the handling qualities improved as you kneaded.  What kneading/dough development method did you use and what determined when you stopped?  Were you able to get a 'window'?

My usual advice is to settle on a fairly simple recipe (and this sounds as if it fits that criterion) and to practice making it until you get it right.  It's amazing how the outcome can change with nothing more than slight changes in method and practice - there are no 'magic' fixes out there.  If you need advice on dough development and handling, it is hard to go past SourDom's beginners blog on this site.

I hear ya -- I was a bit disappointed in the crumb development and shape myself.  Given this was the first time I'd made this recipe, I wasn't entirely sure what to expect, so I followed Leader's timing, etc. as closely as I could.  (And before you ask, no, I don't have access to Type 55 flour ;) so I use what's available from the grocery: Hodgson Mill rye flour and Kroger unbleached white.)  Leader had mentioned that the dough was likely to be pretty sloppy, so I tried to bear that in mind.

Thing is, how disappointed should I be in this attempt?  After all, it's a rye country bread, not focaccia.  The crumb actually is pretty even, but not dense or gummy.  Truth be told it almost looks like a commercial (i.e., Pepperidge Farm) loaf because it's so evenly distributed, although the "bubbles" are a bit smaller -- like a cocktail loaf, but not as dense.

Like I said, I'm just not sure what to expect with this.  (The taste, by the way, is fabulous, hence the "Daniel Leader" remark at the head of this thread.)  How much more open should the crumb be?  How firm (or not) should the dough be when it's fully developed?  I suspect that if there was a problem, gluten development (underkneading) might be where it lies.  Hard to tell, though, so I'm running it past other bakers who are far more educated than I :)

I wouldn't be disapointed.  First off you have a young starter and it normally takes some more time before it really starts performing.  The next thing to look at is the recipe, it is 60% hydration so it isn't going to be a very open bread.  The ferment times are shorter also so less CO2 is produced to make the bread rise.  Did you use the yeast like the recipe calls for?  Since you liked it then it was a good loaf.  Did you think about docking the bread like Leader says to do in the book?

Actually, I did use the yeast as the recipe called for.  And it's instant yeast, not bread machine or some other kind of rapid-rise.  For some reason, fresh yeast is just not to be had in the stores around here....maybe there just aren't that many bakers.  That being said, I'm not sure there would be a difference between the fresh and instant for what I was doing.

I didn't dock, though I probably should have instead of slashing.  The dough is so....light, loose and pfuffy, really, that I was almost afraid of poking holes in it for fear it would collapse!  It almost felt overproofed, although it was just this side of doubling when it hit the oven.  It is also worth noting that I had to proof it in a bowl, not on a peel or in a banneton, and baked it off after upending the bowl onto my "baking stone" (a.k.a., trusty cast iron pan preheated in my yes, gaah, electric oven), so I'm sure that the action of upending the bowl takes some of the "joy" out of it.  Exactly how much, though, is a good question.

I'm having fun working with this recipe, though, and love the taste of it so I'm going to keep trying to get it "perfect."  I'm wondering about the crumb development, though, and suspect that some of the problem might be in underdeveloping the gluten.  What would you think of trying a short-knead technique with something like this instead of the 5-10-8 cycle as written?

I wasn't marking you down, the bread looks fine.

I am planning to make a loaf tomorrow, so will try a similar flour mix and see how it turns out.  If it turns out too badly, you'll never hear from me again -- just kidding.  I'll report back - good bad or indifferent.

I hear ya!  I think we've all had our share of "not our proudest moments," lol!

All kidding aside, believe me, I was far from insulted.  I posted this to get constructive criticism, because I'm kind of walking blind here with this project.  I really thank you for offering your words of wisdom!

Be well and best of luck with your new loaf,

Took a little while but here is the result of my effort.

Basically, I fed my regular starter with rye flour, so not strictly a rye starter but it worked itself into a fine lather as a result.  Then made a standard sort of recipe with a 20/80 blend of rye and white.  I slipped a bit with the water addition and the hydration worked out at 72% so not strictly comparable with yours on that score either (and no yeast).  I think LD hit it on the head with his comment about the relatively low hydration contributing to the tight crumb.

The dough was certainly tackier than I am used to with all wheat flour but it came together well.  I used stretch and fold with one short knead before shaping.  The oven spring was not quite as much as I am used to either but still a very nice textured and tasty loaf.

If I were you, I'd practice a bit more and probably increase the hydration as well.

I'll be practicing with it today.  Hoochie needed feeding and he's getting a bit.....well, enormous, so I'm going to bake some of him off.  He's going Great Guns this morning, very foamy and active, so we'll see how it turns out.  Because the dough is so tacky, though, I think I will try a stretch-and-fold to see what happens.

Hope you enjoy your loaf!