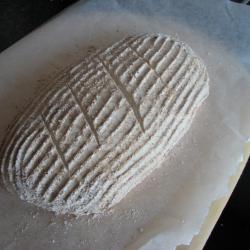 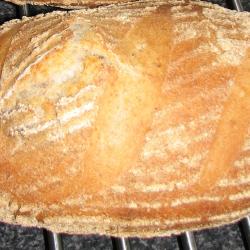 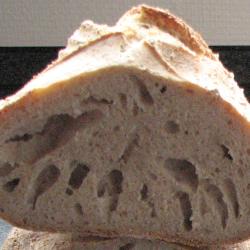 After finding this forum, I thought I’d seek help and advice from the wealth of experience here.

I’ve baked with yeast for some years, and thought I’d give sourdough baking a go.

Combining various info from books and web sites, I tried the following recipe:

mixed and left at room temp. for about 22 hours

Divided dough into 2, folded and placed in rye-coated bannetons. These were placed in large freezer bags and left in fridge for about 24 hours.

10 mins. at 245°c (oven with baking stone in bottom and sprayed water into oven at start).

The taste was ok for a first attempt (but with definite room for improvement). The crust was reasonably crisp (but I would prefer a bit crisper).

The main disappointment was the texture of the crumb – it was a little dense and slightly ‘sticky’.

The timing of the proving etc. was fitted in around my normal working week.

I would greatly appreciate any advice on the best way to improve the crumb texture (and any other tips anyone may have after seeing the procedure I used).

Many thanks in advance.

Hi John. I'll enumerate for clarity and ease of response.

1. If your ambient room temp was 27C, 22 hours is far too long to leave your starter after feeding it up. I find that @ 27C, which my kitchen has been recently, the starter is ripe about 6 hours after a feed. There is probably a window of another couple of hours or a bit more during which it is fine to use, but at some stage it will be starved of 'fuel' and in decline. When using it in a dough, it's best for it to be ripe, not way past this point.

2. I assume the starter culture you used was active when you fed it up, not just taken out of the fridge after a period of resting?

3. Once you'd mixed the dough, did you do any kneading or stretch-and-folds during the 2.5 hours bulk proof period? If not, perhaps the gluten didn't properly develop. It's usual to S&F every hour, and lately with these warmer temps and shorter proof periods, I've found it best to S&F every 30 mins for the first 1.5 hours, then leave the dough alone for the rest of the bulk proof.

4. After dividing, did you pre-shape then shape the dough prior to transferring it into bannetons? Shaping gives the dough structure, which is reflected in the finished bread. Also, you might try de-gassing gently to even out the aeration - that should help to get rid of the caving in the crumb.

5. Just spraying water into oven at the start of the bake will not provide enough steam to get a nice finish on your crust. You need to have some other way of maintaining steam during the first 12-15 mins of the bake (eg: lava rocks in a container at the base of the oven with water poured over at beginning of bake; ice cubes thrown into a pre-heated metal tray in the bottom of the oven; damp towel microwaved for 4 mins, then transferred via a pair of tongs to a metal tray in the bottom of the oven...this is my preferred way).

6. I suspect your bread was under-baked. Generally speaking, I like to give mine 15 minutes with steam with a maxed-out oven turned down to 225C after 2 initial sprays of water (as well as a damp towel at the bottom of the oven), then remove steam source and bake about 12 minutes @ 215C, followed by another 12-15 mins @ 200C. Rotate the loaf after the first 15 minutes of the bake to keep the browning even. Different bakers and books will have different baking recommendations, but this works for me.

Perhaps you're already doing this, but it is best to cool the bread on a cookie rack or simlar for 2 hours before cutting into it.

Try the above and see if there's any improvement.

Hi Ross, and many thanks for your comprehensive reply.

1. The ambient room temp. was about 18c (winter in Scandinavia!).

2. The culture had been fed about 10 hours earlier and seemed active.

3.  Must confess this is where I was pressed for time - no foldings

4. The dough was pre-shaped (but not de-gassed) prior to placing in bannetons.

5. I'll have to check out lava rocks and the other methods

6. Another good point worth examining.

The bread was sliced after about 4 or 5 hours and was cold.

Thanks again for the good advice, which I will attempt to incorporate in my next effort

Hi John. I'll keep the emuneration going out of convenience.

1. I'm a bit confused. You indicated that your bulk proof was done @ 27C. I assumed, therefore, that that was your ambient room temp. So you're using a proofing box, or something like that? If so, I'd suggest you try reducing the temp from 27C to 24C or thereabouts. You might also need to increase proof times, but extended fermentation will give you better flavour in your bread.

3. Aha! Worth addressing this.

4. So, pre-shaped but not shaped? Even though you're using bannetons, shaping will firm your loaf up and enhance dough structure.

5. Yep - having a good steam source will make a difference.

I reckon you're close to a great bread...just those few little things, once addressed, should make a big difference.

Best of baking to you, and don't forget to post pics of your results next bake!

My confusion I'm afraid - you're correct in that the bulk proof was at 27c - it was the refreshing of the starter which was at a room temp. of 18c.

Thanks for the replies and encouragement - looking forward to attempt no.2 - hopefully this weekend

Ross has provided some great tips (as usual). I found it useful to keep a notebook so I can keep track of changes and reflect on what is and isn't working. I had many disasters when I began baking, but after a few months I got the hang of it. Keep at it!

Following the good advice received above, my third attempt at sourdough bread was much more successful!

The starter was refreshed 2 times during a 24 hour period.

The dough was folded twice before forming, and was then retarded 9 hours in the fridge, before baking directly after removal.

Unfortunately I can't seem to get my pictures uploaded (has the procedure been changed?), but the crust was crisp, the crumb soft, and the taste better and more pronounced (though not quite enough yet).

This weekend I'll be adding sunflower seeds soaked in redwine to the basic recipe!

Thanks for the encouragement so far (as the learning experience has just begun, I expect I'll need more assistance again soon).

Regarding picture uploads, simply start a new forum topic or update your very starting post. Uploading photos directly to the site is only supported in the first post currently.

I bake at 240 deg Celsius for the entire cooking time and only remove when the crust looks almost burnt.

First 20 min is with steam.