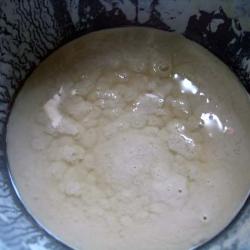 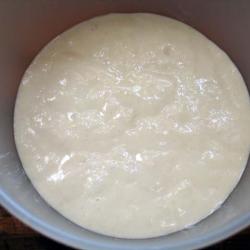 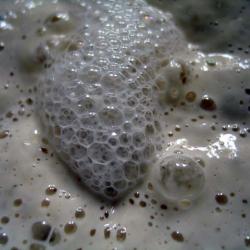 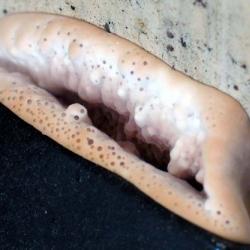 Once you have made/obtained a starter you need to look after it. You will hear all sorts of stories about how a neglected starter was revived after six months of being ignored but, if you want it to function effectively and produce great bread, feed it regularly and store it properly. The best way to do this is to stick to a routine (yawn) and the easiest way to do that is to bake regularly.

Things didn't immediately start to go right after I began my second starter towards the end of 1999. I was still keeping it fairly stiff like a regular dough and, whilst the bread it produced was OK, it didn't have a lot of lift. Everyone has that special bread book that inspired them and transformed their bread making. For me that was Alan Scott and Dan Wing's The Bread Builders which I got my little mitts on in early 2000.

Starter one week after being refreshed. It has a greasy look and has started to produce 'hooch' water and a touch of alcohol that has separated from the mixture. Just mix this back in. Hardly active with few gas bubbles

The following is Dan Wing's method which meant switching from a stiffish dough to one with equal quantities of plain flour and water (100% hydration). With the change, most of my bread making problems disappeared. At 100% hydration it is easy to handle and mix. I use plastic pudding bowls with lids or cling film, you can refresh your starter in the bowls just by stirring without any need to get your hands or your work surface messy.

Starter immediately after refreshment. Flat creamy texture and, as yet, no gas bubbles.

Basically the yeasts in your starter are voracious little buggers who like lots of food and warmth in which to multiply and they would like to be fed every eight hours or so thank you very much. That is fine for the starter which is going to leaven your bread in the near future but, for the starter you are storing for subsequent bakings, you need to feed it well but then keep it cold so that it develops slowly and doesn't require further refreshment for several days.

Starter several hours after refreshment. Active and full of bubbles.

The proportions of food vary according to whose method you use, but the way I do it is as follows:

Close-up of active starter - the stuff of nightmares!

I keep 500g of starter in the fridge because it is handy for all sorts of things like batters as well as bread. My routine goes like this. The morning before baking I take my starter from the fridge and I make up two separate but identical refreshments, one for my store starter and one for my dough. So I take two bowls and weigh out 100g of starter for each to which I add 200g water and 200g plain flour to each. I stir one, leave it out for an hour or so and put it back in the fridge for the following week. Anything left gets thrown away. The second starter gets left out at room temperature until the evening when I add 500g water and 500g flour. Obviously, if I need less starter for baking I start off with 50g or less.

If you see this call a builder, it's dry rot and it appeared in my kitchen!

Well, no one came back on that topic so I'll post a link that you might find interesting: [url]http://www.danlepard.com/forum/viewtopic.php?t=546[/url]

That is a very interesting post Mick. I am several days into activating a fresh starter and the temperature range is roughly 21C to 27C, probabling averaging 25C. I think that an important point about [i]new starters[/i] is that it can be difficult to identify an appropriate feeding cycle. With feedback from forum members, i am now refreshing the starter about every 12 hours. There is mild to good activity in this young brew. [url]http://www.sourdough.com.au/culturecam[/url]

Oddly enough, in its initial 'awakening' after only 30 hours, the starter had excellent fermentaion...as much fermentation as an active leaven. But it appears that those early yeasts were not capable of sustaining themselves for longer than one burst of life (perhaps these early yeasts are acid intolerant and can only survive in the less acidic freshly mixed starter?).

I can't watch that webcam - the tension is just too much.

I'll probably wake up in the middle of the night wondering if that big bubble on the right has popped.

Hi boys and girls,
I too enjoy a look see at the sourcam once a day or two or 3x's, but like a junkie I want the medicine in my arme, wheres the final product or the bread! Show me the money! I hope that you will have a speeded up version on video of the first to final rises, the bake, the slice and crumb shot! Sorry Graham the suspense is so excrutiating, besides I'm impatient, maybe that is why I am so negligent on reading all the science stuff all are posting and just want the money shots!

Making a starter is more difficult than I remember! I think perhaps I am thinking about the whole process too much. Should have just placed a bit of dough in the long grass behind the shed and come back a week later. Graham

Sorry Graham,
I suppose it's because I let my starter sit in the fridge and let it do it's own magic when I refresh a bit for a loaf or two! Dough in the tall grass...hmmm or maybe a starter in the roos pouch!

Hi Mick,
I was wondering about the dry rot, it had an odd alien look to it, thought it was an oven orafice or some strange celtic mascot come out from the monmouth ciabatta from a past thread on Dans site!

Thanks for the detail Mick, this is really helpful info.

Couple of things I forgot to say (I was distracted by the dry rot).

I'm talking here about my white flour starter. I do have a rye starter as well which came from Andrew Whitley at Village Bakery in Melmerby in Cumbria. It came from a Russian bakery and is supposedly over a hundred years old - another item with which to pull the wool over people's eyes when you need the bullshit factor. Some people have half a dozen starters but I don't see the point of this.

The other thing is my experience is in a very temperate part of the world (North Wales) i.e. it's cold and wet. A starter in my kitchen would not usually experience temperatures of more than 23C and it would usually be a couple of degrees cooler than that during the day. You might need to take advice from people with experience of much hotter climates.

It would also be useful if other people described their methods. I see that Jack Lang posted on the forum the other day. You should read his sourdough workshop on egullet. He keeps his starter at 30C between refreshment and doughmaking. He also keeps his starter in the fridge, taking from it when he needs a refreshment for dough making, and only refreshing the starter in the fridge when he is running low. Different courses ...

That's a great series of pix and commentary.

I have your "100 year old" starter picked up from The Conwy Feast... Results have been good, not excellent.. But that will almost certainly down to me rather than the starter.. I have been using standard strong flours from Tesco's... Where do you get your flour from. Is there a local mill you use ?? I am in Deganwy..

Thank you for this site...I am new to sourdough baking, but looking forward to learning.

I have a starter going.  I think it is active, but on my 2nd bake, my loaves were somewhat flat.

Not completely, but not as much spring as my first bake.  I think my question is about feeding

or refreshing before I bake.  When in the process, do I feed my starter, and when do I begin

my first mixing after feeding?  Does this make sense?  I'm not sure I've got the right lingo.

I am feeding my starter 2X daily....but I don't think I'm getting the doubling in mine that I see

in some of the photos here.

Thank you!  Any thoughts would be wonderful!