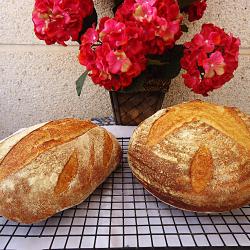 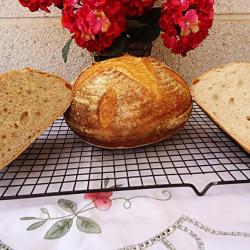 Hi,   I am a retired ex-patriot Brit, now living on the Costa Blanca, Spain.  Since retirement I obviously have a little more time on my hands, and so I have returned to an interest and a profession I took up when I first left school, i.e. Baking.

That was back in the mid 1960's and at that time in the UK. I was employed as an apprentice baker, and also attending the local technical college to qualify as a Baker/Flour Confectioner.  The baking industry at that time was going through great change, which was not unfortunately for the better, and it was not long before I became disillusioned and left the trade altogether.

However at college I did learn the importance of long fermentation times in order to obtain good flavour in my bread, although this was working with commercial yeast, and baking with sourdough and wild yeasts, seemed consigned to history at that time.   Since that time of course they have been rejuvenated, and slowly the standard of British bread is improving.

Therefore sourdough baking is entirely new to me, and so I thought it was about time I gave it a try!!  I came across this website and thought it to be a great resource of knowledge to help me in that task.

Living here in Spain I was uncertain as to the quality of the flour that would be available to me, but have recently managed to find some decent strength wheat four together with some spelt flour So I have since raised my first sourdough starter and baked my first loaves using this flour.   Here are the results.  Not too bad I think for first attempt, but would prefer a little more openness in the crumb, but that I think could be down to my hand molding being a little to rough, as back in the sixties a fairly dense crumb was in favour in order to make a good sandwich without falling apart.

Those loaves are beautiful.  Good job. Really nice crust and crumb. Beautiful slashing. You are more advanced than you may think!

Doma,   Thanks very much for your kind comments, I guess we are all striving for what we regard as absolute perfection in our baking and so are never really fully satisfied.

I think your Breads look great. I would love a slice! Looks like a great crumb structure to me for just about anything I would use it for.

Those breads are looking great hope will be of great taste too.

Was wonder how did you decorate them, want to try this at home!

Hi Patrik,  Thanks for your comments on my loaves.   The pattern of rings is made by the final proof of the loaves being carried out in a flour dusted wicker basket known as a banneton then scored with a lame across the surface of the loaf in any pattern of your choice.   Check out the shop here on this site to find out more about Bannetons & Lames.

I am playing around with different timing options right now and would appreciate if you could share your recipe for these.

Fantastic looking bread. I'm still trying to get a loaf to stay up without pooling flat.
I too would love to share your recipe for timings of starter after removing from fridge.

How did you cook it? In a home oven? Did you spritz it? What was it sitting on? Awsome first.

Hi,  Sorry i have not rplied to many enquires, but I have not been using the iternet for quite a while due to illness.

Anyway to answer the queries regarding the recipe I used was taken fron Dan leaders book of "Local Breads" and was the recipe for "Pain de Campagne"  or French Country Boule. on page 90.   Although I have worked in the past as a proffesional baker, I have never made bread using sourdough techniques.   However living here in Spain I was unable to use the American flours stated in Dan's recipe so I had to use localy available bread flour, which has a gluten content of about 13%.

I used the temperatures & timings quoted in Dan's recipe as a guide, however like many proffesional bakers I did not religously follow timings or record them, but relied mainly on my experience to determine when the dough was sufficiently developed and ready for the next stage.

I baked the loaf in a homemade brick built woodfired oven, and injected steam into the chamber for the first 10 minutes using a domestic steam cleaner, with a suitable nozzle attached, to locate through a 1/2 inch hole made in the wooden door of the oven. This obviously helped produce good oven spring and starch gelatinizationon the crust.

So for anyone wishing to try and replicate my efforts I hope the above information may help.   Give it a go,  with what ever equipment oven etc you have to hand.