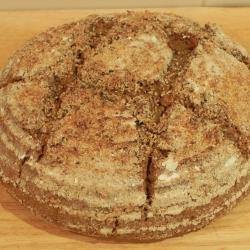 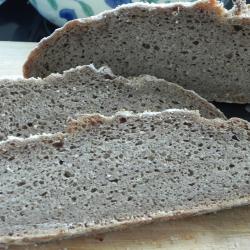 This Roggen-bauenbrot doesn't have much wheat flour in it so was sticky and difficult to work with - I definitely recommend using a stand mixer instead of hands as it's a mucky job!

Starter: My rye starter was fed the night before - 50g starter, 100g water, 75g rye flour. I usually leave for at least 12hrs before making bread with it, as I like my rye breads to be more on the sour side. I fed this at 9.30pm, and started making my dough at 1.30pm the following afternoon, so it bubbled away for 16hrs.

The dough: 100g rye starter (I guess you could use a wheat starter if you didn't have a rye one, but I much prefer the flavour a rye starter imparts on the dough), 350g water, 350g rye flour, 130g bread/AP flour, 20g wheat germ, 1/4 tsp. each of toasted and ground coriander, cumin, fennel and anise seeds, 10g salt (plus 5g instant yeast - which I didn't use). Mix this altogether on low speed on KA speed #2 for about 5 mins, then cover with a plastic bag and let sit for about 10mins. Mix in KA on speed #3 for a further 5 mins. The dough was sticky, soft and ragged, and not very elastic at all.

Fermentation: I placed the dough in an oiled bowl and left it to ferment.  It was supposed to ferment for about 2-2.5hrs or until 1.5times original size, but I kind of got a bit busy and distracted in the garden, and I forgot to check on it until 5.15pm (it had started its fermentation at 2.15pm!). The weather was a bit on the warm side as I made this back on Easter weekend, so I think it may have been a bit long. The rye is a bit more delicate than wheat to work with and the 3 hrs I think were a bit much.

Shaping and proofing: Instead of shaping into 2 boules, I made one larger boule and let it proof in my banneton (dusted with wheat germ and rye flour) for just over 1hr. It looked lovely when I tipped it out of the banneton and I should have left well enough alone, but the recipe said to slash like a tic-tac-toe board so I did, and it collapsed slightly :o( Just too fragile me thinks.

The oven was heated up to 450F about 1hr prior to baking, so my baking stone heats up well, and then the loaf was baked for about 50 minutes with a handful of ice-cubes thrown in at the beginning for steam.

I managed to leave the loaf until the next morning before slicing, and while the over proofing meant it didn't have much height; it had a lovely moist crumb and wonderful flavour.

I would make it again, and watch my fermenting times a bit more carefully, and I wouldn't bother slashing as rye breads don't really have a huge oven spring like wheat loaves. Maybe I would stab it a few times with a skewer in lieu of slashing. Some of my friends didn't like the flavour from the toasted, ground seeds, but I quite like them. There was only 1 tsp. in total, but I guess you could cut that back a bit or leave out if you thought there might be objections!

Can we expect Meryl to be playing you in the film of your efforts to work your way through the bread recipe books of the world?

Keep up the good work.

I'd have to pick someone more age appropriate and brunette, so maybe Catherine ZetaJones? :)