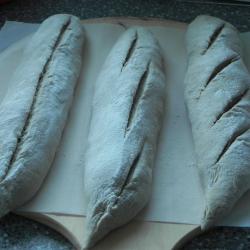 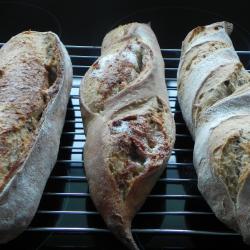 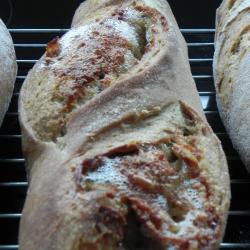 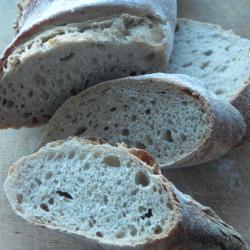 Meteiles au bleu is apparently a classic French bread - made with half white and half rye flour.  I first made this while on holiday in January, but the loaves were eaten so fast I didn't get any pictures at all!  The smell of them cooking was absolutely torturous, and they tasted just as delicious.  So make them again I did.  This time however, I made one without cheese, one with blue cheese and one with parmesan.  The recipe called for them to be made in mini loaf pans, but since i had none, and wasn't about to go looking for some, I made them free form.

Once again a stiff dough levain is used (and I'm starting to quite like using one, after only using a liquid levain for about the first year or so of my SD baking).  I fed my starter at about midday on Saturday - 45g starter, 50g water, 95g bread flour and 5g wholemeal.  This sat at RT until 8.30pm when I made the dough.

Removed the dough from the fridge at 10.30am, let warm up for a couple of hours before shaping into 3 batards.

Shaped and ready to proof

As mentioned abouve, one I left as is, one I incorporated about 50g blue cheese into when shaping (I pressed the dough our into a rough square and dotted it over with wee bits of cheese, then folded/rolled into shape around the cheese), and the third I grated parmesan over in much the same fashion as the blue cheese.  They proofed for about 1.5hrs at RT

and then  baked them at 200C with ice thrown in at the beginning, for 35 minutes (turned them around at half time).  I thought maybe the dough was going to be slightly overproofed as i stupidly forgot to turn the oven on, but they turned out well enough.

Left to right - parmesan, blue cheese, plain loaves, fresh out of the oven!

You can even see the blue cheese still blubbling!  Imagine how fantastic they smell!  The smell of one blue cheese loaf cooking was more bearable than the 3 of them last time!

I have only cut the plain loaf and it was delicious - nice crumb, nice flavour, and nice crust.

I will let you know how the blue cheese and parmesan loaves taste if I remember before they get eaten.  The 50/50 rye/white is a very nice combination.  I'm really looking forward to the next loaf in the book which has more than twice as much rye flour as AP.  I do love a good rye loaf!

Karnie my mouth started to water just at the sight of the title of your post.  The bread look wonderful.  What kind of Blue Cheese did you use?

I am writing to you here simply as a handy way to communicate. I have been reading these sourdough pages with great delight. I noticed on the OakFlats Sourdough website that you store your own milled flour in a plastic bucket. I am just beginning to bake sourdough bread Danish style. I don't mill my own flour but buy it in bulky from a local mill. Do you have "chemical" evidence for or against the use of plastic for storing food? Do you have a certain type of plastic bucket that you use? Thank you for considering this question.

I am thrilled to find a blue cheese recipe to try: Danish blue is a favourite in our home! Thank you.

Thanks LD.  I'm enjoying a couple of slices with a poached egg, my home grown tomatoes and a few slices of black pudding for breakfast as we speak!  Wonderful!

The blue cheese I used was one of my favourites - Blue Castello - a Danish blue that was nice a ripe, a good gutsy flavour withour being too heavy.  The recipe calls for a bleu d'Auvergne  as that is the region the bread comes from, but says a Roquefort or Stilton would be good replacements.  I used my favourite blue.

Yes I have used Blue Castello.  The last time I used it the cheese was a little odd so I'm using a local California Blue Cheese to make this bread now.  I think any good blue cheese will work with this bread.

But all else looks and sounds absolutly Delish!!  I will have to dig Dan's book out and give this a go again!   Your loaves look so yummy!  You can also use Gorgonzola as a substitute for Blue.  I buy small tubs of crumbled cheese for salads, and like to throw the rest into the bread before it goes off.   I also made a parmesan loaf and added Cracked Black pepper..!!! Wow you are really making me hungry!

I love the idea of cracked pepper with the parmesan Millciti!  Next time!  I think any blue would be good as long as it has a good bit of flavour.  I'm really loving working my way through this book, I haven't made anything I didn't like, and have made everything more than once - except the spelt loaf.  Must try that again.

Yes I have used Gorgonzola and it was great.  I like the idea of parmesan and black pepper.  How about some bakers percentages for the black pepper.  Looks like I'll have to go to the cheese shop now.

I liked the formula in that book for Spelt bread.  I didn't follow his directions for kneading the dough.  Here on this forum it is reported to have a fragile gluten so I mixed it very carefully.

I just had a look in my bread notes and I didn't write down how I kneaded the dough for the spelt loaf.  I did have a big read of the spelt bake off thread here some time ago and ended up making a disaster spelt loaf (without scales), I was then weary making the spelt loaf in this book, however have just checked my blog on the bread and I did the machine knead as suggested by Mr Leader.  Funnily enough, I bought some white and whole spelt flour last night, so might just give it another whirl this weekend!

The loaf I blogged about had a big blow out and I couldn't slash it that well, so here's hoping this time I can improve on that!  The flavour of the loaf was nice if I recall.

I tried this recipe and baked three loaves yesterday (parmesan & black pepper, blue cheese and plain). All gone by breakfast this morning. Yum!

Three loaves proving on the bench at the moment.  Getting them ready for a house warming tomorrow.  I reckon bread is a great gift on such an occasion.  I'll post some more details later.

How much black pepper did you put in the loaf Andrew?

Karniecoops, I followed your plan of one blue vein, one parmesan and one plain.  Sure enough some baulked at the blue vein, others at the parmesan - but boy oh boy it all disappeared in no time.

As a bit of background, I didn't make your dough recipe, I thought I should stick to one that I knew seeing as how it was for a special occasion. I also followed Rossnroller's technique of no kneading and just stretch and fold.  It was quite fascinating to see how the character of the dough changed in terms of its texture and elasticity.

When it came to adding the cheese, I remembered something I had read somewhere that I thought I would pass on.  After stretching the dough into the squarish rectangle I placed probably about a third of the cheese in a strip down the middle third then folded the top one third over to cover the cheese.  Then another third of the cheese on the folded face and folded the bottom third up and over making a good seal at the edge.  Then flattened a bit and repeated for the right and left folds.  After some bench rest, flattened and rolled to shape as normal.

The cheesed up loaves did not end up guite as long as the plain as I guess I was a bit nervous about a major cheese breakout.

The interesting thing was the way that there was no 'cheese' in the bread - just the flavour to tantalise the taste buds.

Rats, I've just realised that I don't seem to be able to put a picture in here.  I might put one up in my Gallery (if I can work out how).

Anyhow, the blue vein was by far the most popular and people were wandering around bewailing the fact that there wasn't more to be had.

Glad it was all scoffed heartily Farniam - sounds wonderful.  The cheese incorporating technique you used sounds great - I did a similar thing incorporating nuts/fruit into my Stollen last year - works a treat!