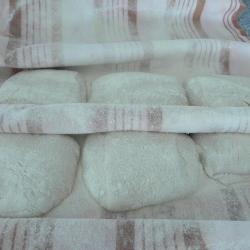 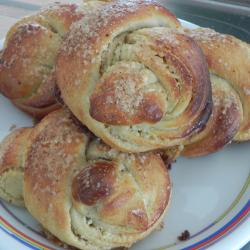 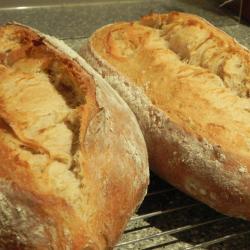 Well my poor liquid starter clearly hadn't had enough loving lately as it was competely hooched over when I fed it yesterday morning!

I had a bumper bread making weekend - yesterday kicked off starting some Ciabatta courtesy of the lovely recipe wildyeastblog.com.  I was up to Ciabatta in Daniel Leader's "Local Breads" but I really didn't want to make a yeasted version, so re-did this wonderful SD version that I hadn't made for AGES!  Baked those about lunch time today but forgot to take a picture of the baked buns before the friends loaded up their bread bags to take home!

I also started a batch of the magnificent Swedish Cardamom Buns although sadly I think my ground cardamom was a bit old and tired as I could barely taste it.  Never-the-less the buns were fabulous, and enjoyed by all.  I'll have to get some more ground cardamom and re-make them, and my girlfriend's also greedily suggested a cinnamon version would go down a treat too!  Just when I thought my diet was going really well!

Since I had a fair bit of starter left over from the above doughs and I couldn't bear to throw it out, I started making a recipe of Pain de Campagne from "Local Breads".  Managed to get a cracking gringe on one loaf in particular, which I always enjoy seeing.

So all in all, a nice relaxing weekend coating the kitchen in flour and semolina!  Nothing better :o)

I too had a baking weekend but not as many loaves made as yourself.  I made the same ciabatta rolls as yourself which I managed to finish of yesterday for my lunch.  Still on a quest to make the perfect sourdough ciabatta.

I just love the look of your Pain de Campagne and am very jelous of how they opened up.  Did you get the recipe from this website?  I printed one but haven't found time to make it yet.

I agree with your girlfriends that a cinnamon version of your Sweedish cardamon buns would be good.

Hoping to squeese in a loaf this weekend. Was hoping for an apple and cinnamon but I wont have time so just a plain loaf will have to do.

The recipe is from Daniel Leader's "Local Breads" which I am baking /blogging my way through.  Here's the link from my blog with vague instructions - www.sourdough.com/Blog/Local-breads-pain-de-campagne