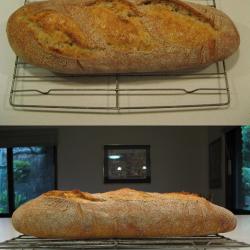 With some advice from Ross in response to my last post I had a number of things on my mind as I embarked on my latest bake.  The recent pars about proofing boxes etc were also germane to my activities.

First, there was the question of temperature - RT has been around 19-20C (give or take).  Some are probably aware that my new oven has all sorts of features, one of which is 'bread-proving'.  Unfortunately, the manual does not specify what temperature it is supposed to hold.  So, undaunted, I decided to use this facility - starting with the pre-ferment.

The following sequence shows the course of events.  The photos are taken at approx one hour intervals after feeding from the fridge (half mother half RT water and flour - 100% hydration).

As you can see, the starter more than doubled in size in three hours and had started to collapse by the time four hours came around.  I started dough making immediately after the last shot.  This was quite a bit faster and greater volume expansion than the last sequence that I generated at room temperature.

When it came to the dough stage, it was noticeably softer and stickier than I was used to and did not free easily from the bench or my hands.  I thought that perhaps I had made a mistake with the ingredient additions but on retracing my steps, I am pretty sure that I had them right.  So, I guess the question is, could this have been entirely due to the higher temperature environment?

At this stage, I had become concerned about the dough proving temperature so I placed an old laboratory thermometer that I have in the oven to check the temperature.  It came in at 100F (I said the thermometer was old) which struck me as a bit on the high side although the dough itself did not feel that warm.

So I finished the bulk fermentation outside of the oven and struggled to manage the dough stickiness by use of a little flour on the bench and the dough mass.

When I did shape the dough, although it was 'soft' it did have a nice 'strong' feel about it but with some large bubbles under the skin.  The dough in its proving basket went into the trusty vacuum bag for an overnight rest in the fridge.

On the bench for a while this morning while I had breakfast and heated the oven.  As an aside, I discovered just before I wanted to put the bread in that I had left the 'old' thermometer on the shelf in the oven.  Fortunately, it was ranged to 500F and so suffered no ill effects and seemed to confirm that my 225C setting was pretty close to the mark.

As I don't have a dish large enough to cover a batarde, I opted to put in a pie plate with some water to provide steam, once again following Ross's suggestion although he does prefer an alternate method.

Well, there is the result.  perhaps not the same oven spring that I got in the last one and the splitting was restricted to the vicinity of the slashes.  So, not entirely sure which of the changes contributed most.  But, hey, I'm learning by the day.  Next thing to look forward to is the taste test ;-{)}

Looks great!  I want a slice.

Just a quick comment on proofing. Your current ambient temps of 20C are pretty well ideal, IMO. I wouldn't be bothering about using the proofing function in your oven while your seasonal temps are so conducive to good baking.

It's true that @ 20C the starter culture will take longer to achieve peak ripeness (I'd guess around 8 hours, maybe more), and your bulk proofing will take 3 hours+, but the upside is that longer fermentation produces enhanced flavour. The best tasting breads I've made have been in the middle of winter, when the proofing times are extended to many hours, and I know others have also noted this phenomenon.

With the steaming, is your water boiling when you pour it into the tray in the bottom of the oven, and is your tray preheated? If not, you're probably not getting sufficient steam with your current strategy. Whatever, I also quickly spray some water around the walls of the oven at the beginning of the bake, then again a few minutes later, just to give the steam a bit of a boost. Steaming is the area in which we domestic oven bakers are usually deficient, and it does make a real difference to the quality and appearance of the crust if you can work up adequate steam.

Hope this is not unwanted advice, although it is unsolicited! I offer these observations in the hope of helping to fast-track your progress. Going by the pics, it looks like you're doing pretty bloody well, though.