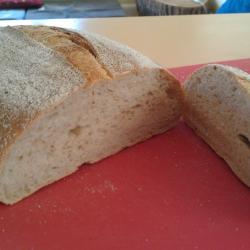 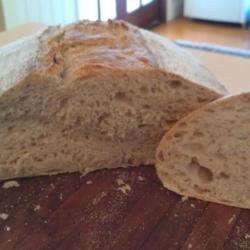 I have a question for you. Yesterday and today I baked 2 loaves that were the same in many respects but exhibited a marked difference in oven spring. In outlining the differences between the two bakes I'm hoping to learn more about how to keep and possibly improve upon the spring in my second bake.

Firstly, here are the two side by side (Baked 24hrs apart):

Both were prepared from the Pane Fresca(1) recipe using Sourdom's Slash and Burn directions.  Both were bulk fermented in a covered olive oil brushed stainless steel bowl and proofed in a wicker, lined baneton at room temp (no retarding). Oven was preheated for 45mins at 220C with a baking stone and reduced to 210C when bread was inserted along with half a cup of boiling water into a baking tray below the stone. Oven temps were verified by an oven thermometer and the water in the tray stayed around for the first 10 mins.

Now for the differences:

Summary of differences between the two loaves

** During the BF time for Loaf 1, there was heavy rain (outside :o)

I also took a 63g sample of the dough of each just after mixing. Loaf 2 was baked just as the sample had doubled 14.5hrs (one hour earlier it was less than double) and at bake time the Loaf 1 sample was a bit over double in size.

One more difference Was that I held Loaf 2 at bulk fermentatin for one hour extra (with one extra fold) as an experiment. I also noticed that on the 3rd fold of Loaf 2 it was already much stiffer than Loaf 1 at the same stage.

So, here's the quiz:

Loaf 2 proofed slower (just doubled in 14.5 hrs vs over doubled in 12.75hrs) but was stiffer during BF. It had lower  average humidity but similar temperatures (proofing was overnight so could not take intermediate temps). Loaf 2 also used rain water verses carbon filtered tap water and had one extra fold and hour rest during BF.

Which of those differences contributed most to the improved oven spring?

The difference in humidity could be a suspect - but I would hazard a guess and say the extra fold is the most likely reason for the extra spring. It refreshes the whole ecosystem within and gives potential for more lift. I have found the same thing, that I get better spring/crumb with more stretch and folds.

Could be the extra stretch and fold (I certainly plan on adding that to my next process) but it's interesting that the dough was already stiffer at fold 3 with the better loaf than with the other one. If that stiffness had something to do with the oven spring then perhaps something erlier affected it too.

I wonder why it was stiffer... it would be either lower hydration or different handling. But higher hydration would produce a more open crumb unless other factors were different.

When I was folding the second loaf's dough the stiffer feel did make me think of hydration. All the measurements  were the same tho. Unless the different water I used in the starter altered it in some way.

From what one can make out in the photograph. The loaf on the left is a "little green" it has a green seam line/area towards the base/bottom of the loaf, a classic sign of under-prooving.

( BTW: From a techincal perspective, "less oven spring and more sagged" are not the same thing )

The variable matrix for what can go wrong in a loaf is around 400+, hence it becomes part chemistry, part craft, come to dark side and bake with your heart & hearth !

Thanks for the feedback Stefen.

I have added more photos to try to make up for the 'crumby' first one lol.

I'd be a little reluctant to go by a sub-sample - so much could be to do with the thermal inertia of the loaf itself in slightly chaning ambient temps. Go by the poke test - if it's springing back rapidly and a significant proportion of the say 1 cm poke with a wetted or floured finger, give it more time. Also I reckon both loaves could have done with a fair bit more baking - they look a little pale to me. A bit more temp might even get you a bit more rise - if the stone isn't quite hot enough, I find that the loaf can sag a little and then if the crust starts to harden before the rise gets going, it's kind of "too late", and by the time it "wants" to rise, it can't - it's like trying to blow up a balloon that's gone hard. Maybe blast the warm up a little more (hotter and longer) and keep the initial higher temp through the first 10 or so minutes of baking, and only then turn it down.

I almost always think after the loaves are out and cooling that I should have let them go a bit further - when you think it's way too dark, then it's usually about right, I reckon! You want that dark caramelisation all over the loaf including the base - you just have to much around with temps, height within oven and so on to figure how to get it... It's almost impossible to burn bread.

Thanks for the feedback Davo,

I'll try the poke test tomorrow and see how much longer I need to prove. I'm not sure I understand your statement completely though.

Go by the poke test - if it's springing back rapidly and a significant proportion of the say 1 cm poke with a wetted or floured finger, give it more time

Do you mean to poke 1cm in depth and see how much springs back?

I'll give the loaves a few more minutes in the oven too. Always up for more crust!