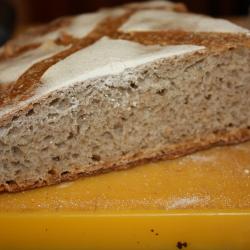 My first is a Crusty Samolina Sourdough from th Yoke Mardewi book.  It turned out quite flat

I put this down to not having a clue about what im doing, but im the type of bloke that will master it before quiting...I use the bowl that i mixed it in with a tea towle with plenty of flour in it to prove.  I must get me one of those banneton thing, just cant justify paying $40 odd to have one delivered thats made from cane???

This bread was proofed for 8 hrs

any opinions on what i have done wrong would help, although it does taste very good

that is exactly how mine always turns out! would also like to know what you have to do to make it rise!

Being a beginner myself I can only say that in my experience that it could be:

1. over proofed, did you do the 'poke it with your finger' test? I've been reading this post about proofing and its helped me

2. baking it, was the oven super-hot? Did you use a baking stone or a pot? These things helped me get a better rise.

A banneton can be made from a wicker basket lined with calico, this type of basket that is often found in craft shops, another alternative is a plastic colander ( available from $2 shops) again lined with calico.

There are a few entries on here where people have asked the same question about rise. Have a look through for more info, but in my experience:

You can find links elsewhere on this site where each of these concepts are talked about in more detail, and suggestions on where to find pictures and videos to help further.

Great advise. Some questions about terminology: what does: underproof and overproof mean? ditto: tension the skin properly?

Thanks for you patience!

Well, I suggest you read SourDom's beginner's blog on this site - he has pictures and everything.

Because that looks virtually identical to my first loaf, about 4 yrs ago. It actually looks pretty reasonable as a first go to me.

I reckon it might rise a little taller if:

-you use a higher proportion of white flour - it looks reasonably loaded with wholemeal or rye?? Nothing wrong with that, but I reckon you can get a feel most easily with a predominantly white loaf, and then muck around with percentages of other flours once you have got consistency.

- the starter matures a little more. Maybe it's just a little young?

-You get on top of kneading and stretch and folding and shaping. For kneading I personally use french folds with wet hands, using short 10 second kneads at 10 min intervals for about 4 goes after mixing (and resting for 20 mins), Then I bulk ferment for a further hour or so, with a couple of strectch and fold using flour. To shape a boule, you need to stretch the skin a little to tension it - you can do this by roughly shaping, putting the roughly shaped loaf right-side-up (as it will be baked) and kind of "scissoring" under it with your hands - this will grip the bottom of the loaf and pull it into the i middle (underneath) and tension the upper skin. But you dont want flour under this as it won;t be grippy enough. Then pinch any seams underneath that aren't sealing by themselves (try not to use flour during shaping as the seams will not seal themselves), and pop it upside-down in bowl.

- Bake it while it still springs back a tiny bit, slowly, on having a floured or wet finger poked a cm into the loaf. If it doesn't srping at all it will be overproved and tend to spread and not rise. Maybe try a poke after 4 hours and see how it's looking.

-make sure the stone and oven is nice an hot (like 40 mins to an hour warming up - if you use a stone) - this makes it spring (it may flatten in the first 5 mins, but then springs hard). if the stone is not hot, it will tend to flatten, then the crust wil harden before it gets enough internal temperature oomph to rise, so it's kind of like a hardened balloon when it's trying to expand upwards - or that's the way I think of it.