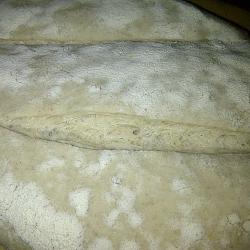 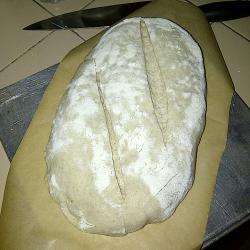 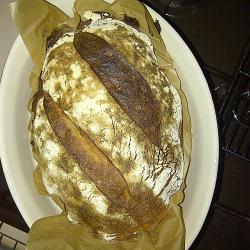 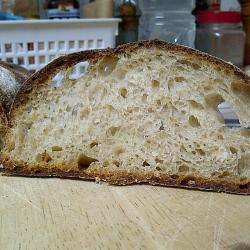 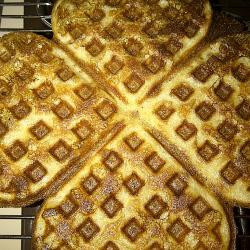 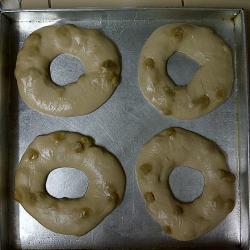 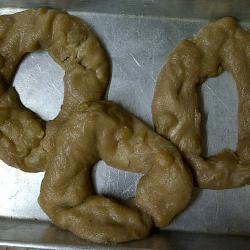 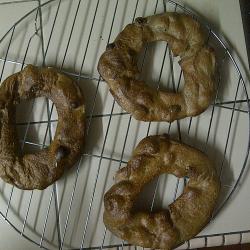 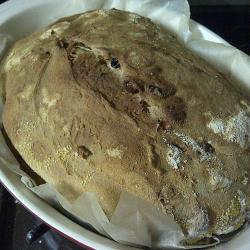 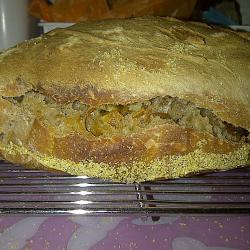 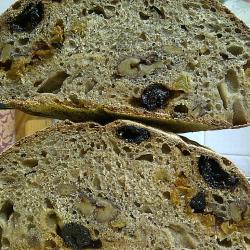 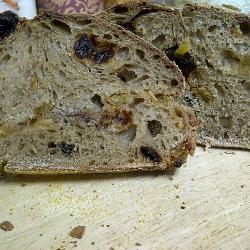 Hello, I posted earlier regarding my attempts at starting a starter that had milk/four/sugar. After about a week and changing it to a 100% hydration flour and water starter, the following are some of the things that I have baked. I am really excited at the results thus far and will continue trying new recipes. Any comments are welcome!

I first made the Norwich sourdough from Wildyeast since it was so highly rated for a first loaf, but I made a hybrid loaf since I wasn't sure if my starter was working or not and added a teaspoon of instant yeast. Below are the pictures after a 20 hour final proof in the fridge and baking in a tiny fan assisted oven. I heated a roasting dish for 20 mins before placing the scored bread into the dish and putting it back in the hot oven. I supplied steam by just spritzing 8-9 times once the bread was in. I repeated spritzing after 5 mins.

Just before going into oven on modified peel (upturned baking dish- need to try something else!)

And after coming out of the oven - 50 mins at 200 C, needed to shield with aluminium foil because the elements are just too close to the top of the bread. Very brown but not burnt. Crust was extremely hard and chewy. Is this right?

And finally the crumb. Not bad but I couldn't help wondering if it was due to the addition of instant yeast?

Anyways onwards since I had a lot of starter discards I also made sourdough waffles from Wild Yeast. Superb! Fluffy, crispy and delicious!

Next I decided to try my hand at some bagels- Cinnamon Raisin (also from Wildyeast). Before boiling in soda, promising...

Unfortunately after boiling and baking. Very sad looking and chewy bagels. The only one who likes them is my 15 month old who has 10 teeth and likes chewing on things (he may be teething!) If anyone has any ideas what went wrong, much appreciate some comments.

After the bagel fiasco, I fed my starter (Shaggy) and put him in the fridge as I was away and travelling for the week. When I got back on Friday morning, I took Shaggy out. He was alive as there was bubbles and hooch, so I fed him with a ratio of 1 starter :2 flour and 2 water. Repeated the feeding after 12 hours. Saturday morning Shaggy was bubbling and active. So I decided to try a Raisin bread/ Basic fruit loaf from SourDom. This time, no added instant yeast! Pure starter, was a bit nervous, but had to give it a try. Mixed everything together around 10am (used a mixture of golden raisins, dried cherries, citrus peel and walnuts), then had to leave the house and was out all day. Got it to the final proof which asked for 3-4 hours, but after I got back, it didn't seem quite ready, so decided to leave the loaf to rise more (total time about 9 hours). Perhaps my kitchen is cooler than I think or my starter is not vigorous enough. Next time for the second feed, I think I will use a ratio of 1 starter :1 flour: 1 water. Perhaps this will make the starter more vigorous.  I think I made a mistake not putting the whole thing to proof in a bag, because when I finally tipped it out of the pan that it was proofing in, it had a thick leathery skin and had stuck to the linen. Dried out I think.  No photos of this unfortunately, only after it came out of the oven. I tried what Sourdom suggested about switching off the oven to hopefully improve oven spring, but my oven cooled  down really quickly. Initial temperature was 240C but went to 140 after 8 mins. I turned the oven on again immediately. And maintained at 190C for another 45 mins. The slash didn't open up properly and there was a crack at the side of the loaf.

The smell was heavenly! And could not wait to see the crumb.

It was delicious! Will try again to improve my technique.

Thank you for reading. Appreciate all and any comments. Cheers! Erin

Congratulations! They all look fantastic. (Except maybe for the bagels - but I like chewy so maybe I would have enjoyed them with your baby.)

I'm jealous of your crumb. I think maybe I've been underproofing.

Thanks Wishfish! The Norwich loaf I used a bread machine to knead as I have never kneaded by hand before. However for the fruit loaf I kneaded by hand using SourDom's method. Its surprisingly easy.

Good luck with your loaves!

Good looking loaves.  I think you're right about the surface drying.   I keep mine covered in plastic while they are doing their initial proof, and use a damp towel to cover for the final proof.  They develop a nice crust that is not too thick, which doesn't restrict the rise.  This probably contributed to the long final proof you experienced.

I've been making sourdough for a lot of years (about 40), but I'm still learning.  Thanks to this resource, I've been able to start to figure some things out that would seem to be really basic, but that I hadn't considered before.  I think I have insights into two that you might consider.  One of those is proofing time and the other is the activity of the starter.

Let's start with the "starter".  I've really learned the importance of "building" a starter.  I only keep a small amount (about 2 oz.), and build what I need for each recipe from that.  I always double what I start with, so if I start with 2 oz of starter, I'll add 1 oz water and 1 oz flour.  The next will be 2 oz flour/2 oz water, and continue until I have what I need.  Not only does this mean that I have a very active starter, but I can also figure my proofing times better, by noting how long it takes for each stage to double.

I was originally taught to let the starter rise and fall, but when I'm building a starter, I time the addition of the next build to the peak rise.  This keeps the yeast in overdrive, and if there is still a little sugar left, then so much the better.

BTW, I also keep a milk based starter.  I have to add about 25% more milk than water to keep the same hydration, but it is a beast all unto itself, and I use it when I make milk breads or cinnamon rolls.

I look forward to seeing your future productions since we are in the middle of a summer long heat wave and drought, and I'm not doing any baking until it breaks.

Thank you for your comments. I haven't been able to reply sooner because everytime I login, the Sourdough Companion pages would fail to load/hang. This is the first time in weeks that I have been able to get this far.

I agree with what you say about getting the starter at peak activity. I think mine is around 8 hours. I've been making Teck Poh's Pain de Mie with great results. I even got approval from my family for the soft crumb and crust. They are Malaysian, so if you've read Teck Poh's rants, you will know what a Malaysian's criteria is for "good bread". Oh and for the Pain de Mie starter, I just use milk instead of water. Seems to be fine. Will post photos if I can.

Something that I do differently from you but similar to Martin Prior is that I keep my starter in the fridge and just take what I need to build for the new bake. I put the rest back in the fridge for next time. I'm experimenting to see how long the starter can last without refreshment. I find that this produces a distinctly sour flavour. I think some people out there are looking for a more sour note. Perhaps this could be the answer? Since there will be a larger starting amount of bacteria in the starter? I may have to keep my starter your way though, Chaz, as my family is not used to the sourness and are complaining that the breads are TOO sour. Sigh.

I like a "sour" bread too, but like yours, my family doesn't.  I have also seen my "sourness" lessen.  In the past, I have run into issues with keeping a big starter.  Mainly, the time it took my sponge to take off.  With building a starter, it always seems to raise right on time, and simce I'm usually under a schedule, I really like the results.

I'll certainly look forward to your posts and results.  It all helps with the leartning experience.