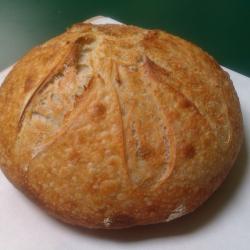 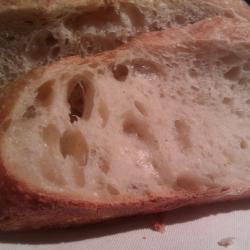 Although I'm not new to baking bread, this is my first forray into baking totally wild sourdough. It took three tries, but I finally "caught" a beautiful starter, made of 100% wheat at 100% hydration. For my first loaf I decided to try shaio-ping's "Home Bread", partly because it called for 100% hydration starter. Sure, I could have done the math to figure out how to get my starter to a different hydration, but I was in the mood to make bread, not do math. Actually, I'm almost never in the mood to do math. But, I digress.

This was also my first attempt at the stretch and fold method of developing the dough (as opposed to traditional kneading). I knew the dough needed to be looser than what I'm used to, but wasn't sure just how loose was "loose", so decided to follow the recipe exactly and use this as a "baseline" for future tweaking. As luck would have it, my dough was WAY too loose! I transfered the dough straight from the fridge to the peel, slashed the top and stuck it straight into the oven. By the time I had the oven door closed the slashes had spread significantly, not due to oven spring (of course!) but because the dough was spreading due to being too loose. And the little flaps created by slashing at an angle? They had become one with the main loaf, once again... I decided to forego the inverted bowl over the loaf called for in the instructions because I wanted to watch the oven spring happen. I got oven spring, but it wasn't quite what I hoped for! Here's a shot of the final loaf:

See that dark line around the equator started? It started out as the lowest edge of the bread. When the oven spring started, the slashes on the top had reintegrated themselves into the whole dough mass, so the weakest point on the loaf was apparently the creases on the bottom from when I formed the loaf. So, ta-dah! oven spring, from the bottom instead of the top. Fortunately, it still tasted good, so my husband didn't mind!

Since I now knew how loose was too loose, I tried again, this time adding a little more flour to get a slightly stiffer dough. And, even though I still really wanted to watch the oven spring, I inverted a stainless steel mixing bowl over the loaf for the first 20 minutes so the loaf would be well steamed. I baked the loaf for an additional 10 minutes to get it nicely browned. This time the results were better:

Needless to say, I'm feeling quite proud of myself. Is it perfect? No, but I'm tickled pink, and can't wait to try my next loaf!

Just so you know, I found the first loaf hilarious. I actually took a photo of it while it was still in the oven to send to my husband at the office so he could share in the comedy of it!

Great job!  Now you have discovered a new way for oven spring to expand.

Brilliant Dorean!  The first loaf is fabulous in it's quirkiness (and I have no doubt it tasted fab) and the 2nd loaf is an absolute stunner!  Beautiful blistered crust, fantastic crumb - Well done!

I have to admit at having a laugh at your first photo (reminds me of some of my more interesting loaves!) so thank you for bringing a smile to my face!

Now it's onwards and upwards - you do realise of course that now you have "caught" the bug (so to speak) you will be forever on the quest for the perfect loaf!?  Welcome to the club :o)

Yeah, I sort of fell into the quagmire quickly on this one. In principle I reject the idea of being able to make the "perfect loaf", because I don't believe there's such a thing. Perfect is in the eye of the beholder (or judge, if you're in a competition), but as we were eating some of this loaf with dinner last night I found myself thinking, "Next time, I should..." So yeah, I'm on the quest. My husband says he will be right there, encouraging me in the quest, knowing he gets to eat all my attempts!

I so love my hubby for eating all my attempts.  We need to give our partners a round of applause for eating all our attempts, bread or otherwise.  Lovely bread, even the 1st one.  Happy Baking!!

Looks great Dorean! What a wonderful looking crust and crumb you have produced. And the first one - I have to say I would have been delighted if my first had turned out as good (mine was about 2 inches high!).

I want to eat it NOW. I've been swamped with work and haven't baked for two weeks and I'm sorely missing it. Thankfully I had one in the freezer I could get out and refresh, but it's just not the same....

The second however... hubba hubba, what a beauty!

Looks fantastic, I have to try the recipe now!  Good going!

Look! A bread with underpants!

But the second loaf is absolutely stunning, with the blistered skin and nice bubbles inside.