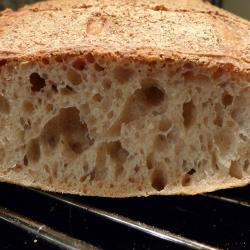 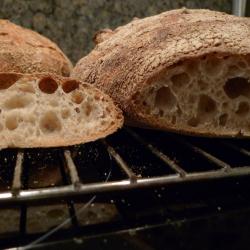 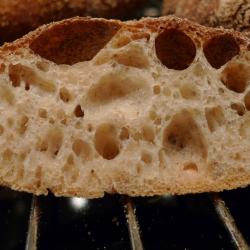 I'm not sure if this is the right sub-forum to post in having only just discovered this site - let me know if it belongs elsewhere.

I've been making my own pizzas for some time but had never really got very much into making bread by hand. When I decided to have a go at bread I found that I could make a passable loaf but if I changed any small detail it would all go wrong. A few weeks ago a friend helped out by suggesting Richard Bertinet's "Dough" which turned out to be a revelation and things improved a lot. I then got his "Crust" book and had to try the sourdough.

I expected my first attempt at sourdough to go wrong and teach me some important lessons but I was delighted to find that it worked out pretty well with only a couple of glitches: I had 1.8Kg of dough but only one 1Kg linen lined proving basket so I used a mixing bowl lined with a teatowel for one of the loaves and despite flouring it heavily the dough stuck slightly.

I baked the mxing bowl loaf first (oven at 250c with the fan off, pizza stone and rapid misting*) but didn't have the knack to get the loaf of of the peel (thin, plastic chopping board) smoothly so it went from round to fat kidney bean and deflated almost as fast as my mood. But, it sprang up more than I could have hoped for in the oven and ended up looking pretty good. For the second loaf I used extra polenta on the peel and jerked it more confidently at the baking stone which resulted in it going on straight and round.

The flavour was pleasantly sour, the crusts were nicely chewy and, for the non-mixing bowl loaf at least, the texture was quite open and regular. So I have a lot to experiment with but could not be happier with the way the first batch turned out.

I can't wait to dig through the forums here and discover the hints, tips and advice that I am sure is waiting for me.

* Just a comment on the rapid misting: I tried one of the squeeze trigger plant misters to spray the oven just before and just after putting loaves in but I now use one of the pressurised misters with a pump handle on the top as it delivers a big volume of fine mist very quickly and has definately improved the crusts I get. I have an earthenware cloche on order which I hope will result in further crust improvement.

I hope I haven't bored you - it is hard not to babble when I discover something exciting!

Those loaves look lovely.  The crusts seem quite nice in the picture.  Welcome to the fanatical world of sourdough!

Nice crumb too. Hope the taste was as good as they look!

I concur with you about getting a good baking book - the novice is drowned in information and misinformation from the internet and it's hard to sort out which is which. I know that my own baking improved hugely when I followed the good reliable advice found in books by Reinhart and Hamelman. Bertinet is good too. Once you have a good grasp of the basics you can start to work out what's useful and relevant, from all sources.

Thanks for the encouragement!

Yep, getting a good book made all the difference. I have looked a little at the Reinhart books but my impression is that he has changed his methods between books and to get started I want simplicity and consistency. The Bertinet books seem to simplify the whole process while giving good, reliable results so I will practice with them for a while and will then have a proper look at the Reinhart books. I haven't come across Hamelman yet but will check out his books.

I do also have Bread Matters, Tartine Bread and Baking with Passion and although I have just started a couple of the starters from Bread Matters (rye & chick pea flour) I haven't followed bread recipes from any of these yet - they are just for relaxed reading and inspiration, for now.

I think that Reinhart's great strength is his bread recipes and methods - especially but not only his work with whole wheat flours. You certainly won't go wrong following his fundamentals, but I don't think he would ever claim to have the same solid depth of scientific understanding of, say, Hamelman. I would say his (Reinhart's) approach is more intuitive and empirical - he's a great observer rather than a scientist.

Reinhart mentions the help given to him by Debra Wink, who I think probably filled in some of the holes in his knowledge. Her posts on The Fresh Loaf are mind blowing, and have been an enormous help to me in getting to grips with some of the complexity of what's going on - and also blown away some of the many myths which are to be found aplenty in this field. I believe she is currently occupied writing a book on these subjects - if so it will be one of the most important bread books in many years.

My bread book shelf is already groaning under the weight of too many books - but as well as the Wink book (I hope), I think I will now have to add a Bertinet tome at least!

I've gone ahead and ordered the Hamelman book - can't wait to get it and start having a flick through. Like you, I will be keeping a look out for the Wink book.

I've got both of the Bertinet baking books (Dough and Crust). There are recipes in the first book (Dough) that are not in the second book but where recipes appear in both they are slightly more refined in Crust, as you might expect. For example, the Ciabatta recipe in Dough just calls for strong white bread flour whereas Crust calls for Ciabatta flour or 50:50 Italian 00:Strong white and the final shaping in Crust involves one less fold than that in Dough - I've tried both and the Crust method gives a much lighter, more open crumb.

The greatest thing I learned from Bertinet, though, is the french style of kneading (lift, swing, slap, fold - the DVD with the book shows this very clearly) which has allowed me to work very wet doughs into smooth elastic balls with no flouring or oiling of hands or worksurface and has massively reduced the time it takes me to work dryer doughs. I prefer the idea of working the dough in one go rather than the turn-it-over-and-leave-it-every-so-many-minutes as every one of those turns will involve cleaning something up.