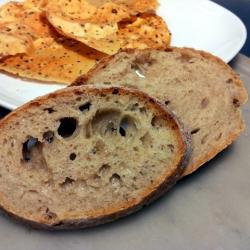 This was actually an accident, as I was preparing my (now favourite) Hamelman's Vermont Sourdough, but I made a mistake calculating the water and I put like 430 cc. of water for 500 gr. of flour! When I realized my error it was very late, so it went to the fridge in a bowl. Next day after coming home from work I added salt, tried some stretch & folds into the same bowl and left it to ferment. In less than three hours it was ready for the oven: I could feel it touching the dough and poking it with a finger.

What is amazing of this bread is its sweet aroma, resulting from the very long autolysis which produces a lot of sugars, so when the yeasts and bacteries wake up they can feast on it.

Your bread looks really good and I draw some inspiration from it as I just made the same 'mistake' yesterday. My dough was super soft but instead of adding extra flour I've opted for the fridge overnight option. Let's hope it works out as well as yours

hi your bread is very good

we do same bread as your