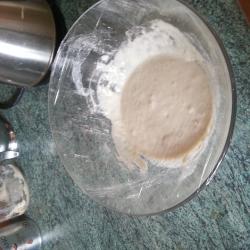 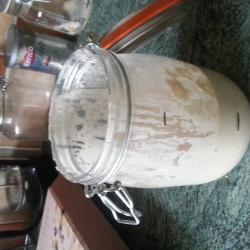 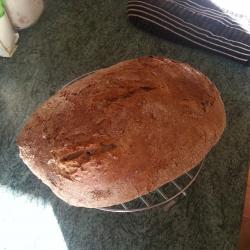 Okay, so up till now i have only baked 4 loaves of any type of bread, my starter is 7 days old and healthy, and I have all my equipment except the water sprayer. I am going with Sourdoms final stage in the beginners blog after studying and cross referencing all week.

I may have already made my first mistake as it is only 12 hours since I fed my starter, and now I have stirred it and taken a teaspoon full for my sponge, could this mean my starter is too weak? ill have to see.

8am Saturday, mixed 1 teaspoon of starter with 90g strong white flour and 90g still bottled water, clingfilmed and leaving till 8am tomorrow morning. - More to follow! (hopefully with pics)

Well after a few disasters yesterday (mainly my starter jar exploding), I have been following all the steps since 8 this morning. Mixed sponge in water, fixed in flour, 3 kneads so far, 1hour rest, slash, fold and about to do my next slash and fold. The last one did show a few air bubbles so I think things are okay so far. Im not too worried about technique, more about moving dough from the peel onto the stone.

I now have all 3 slash tests done, I made my boule and then shaped into a baton, 2 generous handfuls of rye flour rubbed into my new cotton tea towel, wrapped around and twisted under, on to a tray and into the hot press (which is irish for linen cupboard or whatever you want to call it). Im heading out till 4.50pm when the oven goes on, and praying it doesnt over prove, infact I might try and get back earlier just in case.

So far it has gone so much easier than expected but I still have the 'Big test' to go. I have it written to memory: Semolina, Peel, turn out, spray, slash, oven, shut door, breath a sigh of relief!

Hopefully ill get some pictures up and not sideways this time!

Okay, well the whole getting in the oven part went perfect but then it all went a bit wrong after that - turned out I had to keep sliding it out of the oven to spray with water, I did maybe 20 minutes at 220 deg and then turned it down to 200 deg. After 35 minutes I just didn't feel it was done, so I turned down to 190 deg and ended up cooking for another 25 minutes before I decided - "it's either done or it's not" and took it out. I have a feeling it won't be good but give it an hour and i'll know. Stay tuned!

Sunday 7.45pm - I can't believe it - it is perfect! Or at least perfect compared with anything i've cooked before, and delicious - gonna post a picture now, still can't believe it came out as well as it did!

Just loved your progress reporting.  Like so many things in life the first time is often the 'hardest'.

Rather than spraying, you might consider putting a tray of water in the bottom of the oven to provide the steam - not so much heat loss involved.  Put an oven proof dish in when you turn the oven on and add a couple of cups full of boiling water to it a couple of minutes before the loaf goes in.  Take care and wear mitts as it spits and splashes a bit.  Take the dish out after 12-15 minutes.

I'm sure you'll have gone on to bigger and better things by this.  A darned fine effort by any measure and a good read as well.