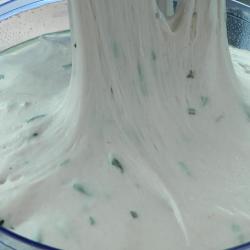 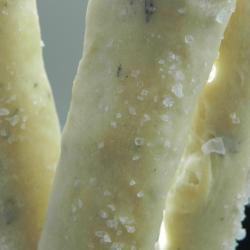 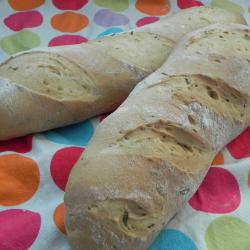 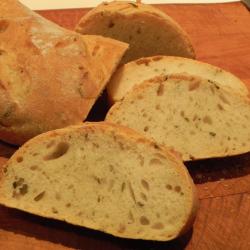 Panmarino is actually the 3rd bread in the Italian section of Daniel Leader’s book, however I haven’t written up the first two, as I’m afraid they didn’t excite me much! This section covers breads from Tuscany and Verona and on a quick sqizz through the chapter, all breads seem to be made using a yeasted “biga” as opposed to a SD starter, so already I’m feeling disappointed.

The first loaf was “Saltless Tuscan Bread” (Pane Toscano), and as mentioned in Farinam’s thread, I didn’t like it at all. As Farinam found when recently visiting the region, the Tuscan’s have omitted salt from their bread since the Middle-Ages when a tax was levied on salt. The lack of salt results in a pale coloured and in my opinion, tasteless bread – needless to say, I won’t be making that one again!

Loaf 2 in the section was Stirato or Italian baguettes. Once again a biga (flour, 2% yeast, water at 60% hydration, left to ferment in fridge for 9-17hrs prior to making dough) was used to make the dough. Curiously neither of these loaves were slashed, and both of mine burst on baking. The crust isn’t anywhere near as crisp and chewy as a French baguette, and the colour of the loaves is more golden in colour. Not bad tasting, but they didn’t really win me over.

So on to the Panmarino, the recipe also uses a biga, and despite my rule to always bake according to the recipe first time around, I decided I was sick of yeasted bread so replaced the yeasted biga with a stiff SD starter. I was making some Pain au levain at the same time for a BBQ with friends, so made up a double batch of starter using 10g wholemeal, 170g AP, 140g water and 108g starter – these quantities are a bit arbitrary so I wouldn’t pay too much attention to the % of each! The starter had a nice slow ferment overnight at room temp – which is quite cool these days!

The dough – 167g starter, 300g tepid water, 500g AP flour, 65g extra-virgin olive oil, 1/4c chopped fresh rosemary, 15g salt, and ½ tsp dried yeast (the recipe called for 1tsp, and I was reluctant to use any, but I thought since I’d already used SD instead of biga, I’d better follow the rest of the instructions. As it happened it worked out well time-wise for my BBQ, but you could leave it out). All of this was mixed together and then kneaded. No mention was made of an autolyse, and I couldn’t help but add one in! So much for doing as I’m told! I kneaded for about 10 mins using my Kitchen Aid on setting 4 by which time it was clearing the sides of the bowl nicely and was silky smooth and elastic. Once kneading finished, the dough was plopped into and oiled lidded bowl and I left it to ferment at RT for 2 hours:

– it had pretty much doubled in size during this time (no folding of dough during fermentation mentioned).

I made 2x 414g fat baguettes, and 4x60g breadsticks (brushed with water and sprinkled with rock salt). The bread sticks only proofed as long as it took the oven to get up to 180C, and the loaves proofed at RT for about 1hr. I baked the breadsticks at 180C for about 20 mins (the dough was cooked, but the crust didn't have much colour):

Breadsticks in the oven baking (above) and ready to eat (below)

Once the breadsticks were cooked I then turned the temp up to 200C and baked the loaves for 40mins (with steam, even though it wasn’t asked for). I did slash my loaves as was a little annoyed at my Stirato and Pane Toscano bursting unscored. The smell of the rosemary was absolutely lovely and the flecks of it through the loaf looked great!

I have just found a post of Johnny's from ages ago where he also made the Panmarino, and included a wonderful story of its origins.  His loaf was shaped into a boule and sprinkled with rock salt.  After having tasted my salted breadsticks and the loaf, I think the extra sprinkled salt definitely adds to the bread (and my hungry friends agree), so next time I would do this extra.  The olive oil definitely gives the dough a softness, and the crust is certainly only just there - it will interesting to see how well they last at RT.

This loaf I would make again but without the yeast and perhaps with and overnight fermentation in the fridge (along with aforementioned rock salt on top).  I thought the rosemary was going to be overpowering, but it clearly mellowed on baking and produced a wonderful flavour through the bread.  I'm sure there must be focaccia on the horizon, and think the herbs in the dough, with maybe a bit of garlic, olive oil and rock salt across the top would be very tasty indeed.

Your bread looks delious. I love rosemary bread.  Will have to give this loaf a try and add some course sea salt.  I made a (thick bread dough type) 50% sourdough starter a few months ago. I hated throwing out all the excess starter so I made a boule loaf with it.  No Salt!!  Well, we ate the first loaf but when I had enough for a second loaf, DH said "No thank you! This stuff has no flavor."  So, understand why you don't like the No Salt bread.  I'm not much of a poster, so appreciate yours & anyone else's posts, like this one, which comment about breads from books I own.  Happy Baking. M