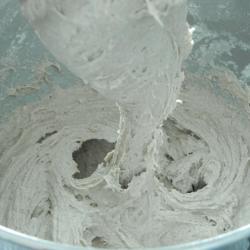 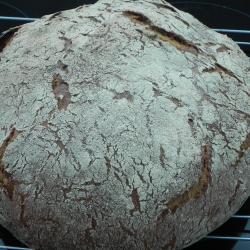 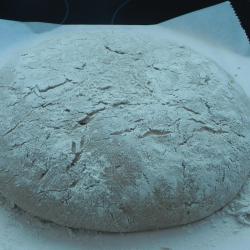 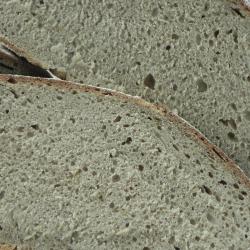 Seigle d' Auvergne is the last bread in the France section of this book.  The first time I made it, I followed the ingredients list exactly (as I generally do first time around), but the result was nothing short of a building block!  There is major error with the volume of water stated in the dough ingredients.  So after trawling the internet for other folk who may have also found this problem (of which there we some), I found LD's blog on the same bread, and went along with his advice - thanks LD!  The result being an absolutely wonderful loaf of bread!  So this story is about my second loaf and not the initial masonary version.

To be honest I was quite surprised to find a French recipe with such a large proportion of rye flour in the dough - I didn't realise the French made such rye-ey loaves.  I think maybe I need to spend more time in the Auvergne!!

The method for making the dough was not the usual process, so was interesting enough in itself.  The first part of the dough involves mixing 125g starter (I ended up using all the starter as I didn't want to save any for another day), with hot tap water  - I used 550g (LD used 595g, whereas recipe mistakenly calls for only 350g) - and giving it a good stir.  I then added 500g medium rye flour and mixed for a short spell on the stand mixer until it was like a thick smooth batter. I covered the whole machine and bowl with plastic bag, and let it sit at RT till 11am, so that must have been about 1.5hrs.  I made this at the beginning of the month so the RT would have been approx 18-20C (First ferment).

We then have to add 200g AP flour and 20g salt and give it a decent mix to develop the gluten in the wheat flour.  I mixed at speed No. 2 on my Kitchen Aid for 8 minutes.

Mixing complete, I transferred it to an oiled bowl for its second ferment.  At this stage my notes say it was the consistency of peanut butter!

So after covering the bowl with a plate, it sat till 12.30pm (so about 1.25hrs) - theorectically it was supposed to have lightened and be soft!  I did note that when I shaped my boule it was a very slack dough and was nice and soft, so hopefully this was about right!  Due to the general slackness of the dough I liberally coated the bench top in rye flour to shape my boule.  I was as gentle as I could be with the dough, as given the fact it's mostly rye I thought it would be a bit fragile.

Once shaped I placed it directly onto a piece of baking paper on my peel, sifted over some rye flour and then slid the peel into a plastic bag for the 3rd ferment (proof).  I had already turned my oven on at about 12pm as it needed to get real hot for this baby (250C).

The loaf proofed till about 1pm, by which stage it had spread slightly and the surface was slightly cracked - according to the book, this is all good!

So in the oven with some ice cubes she went.  Once in the oven, I dropped the temp to 230C.  Cooking time was 45mins, with a turn around at 1/2 time (my oven has a hot spot in back left hand corner). The loaf surprised me by having some good oven spring, and I wasn't surprised at a couple of small blow outs that correspond with the said hot spot.

I didn't write down how long I waited before I sliced it open - usually I'm pretty hopeless at waiting!  But I have read so many times how other folk have waited before slicing rye loaves, so I believe this one got to wait till the next morning.  Actually I do remember, because I took half of this loaf up to Mum and Dad's on the Sunday, to go with the lunch I made for them for Mother's day.  So it would have sat for at least 18hrs prior to slicing - which is a record for me!

The crumb was outstanding!  Soft, even texture, moist, and most delicious!  My father even had several slices and he "can't be bothered with brownish breads", and even commented on how nice it was!  So that's saying something :o).

This bread was different to make, and despite the disastrous first attempt, it was well worth the effort of figuring out what went wrong.  Definitely one of my favourite loaves in the book so far, and one I'd make over and over.

Special thanks to LD for his formula correction!

Looks like it turned out great.  The slices of your bread even look like mine.  I cooked mine in a Dutch Oven which kept it from spreading out.  I'm not sure if that is that big of a deal but the most important thing is the bread turned out to be something that you can eat instead of a brick.

Thanks for finding the mistake. Such a simple typo can create so much havoc in a recipe. Made the correction in my book in ink, so it is permanent.  Your bread looks delicious.  Will have to try it soon, as I love rye bread & I'm even getting hubby to like it too. Thanks to LD for the formula correction.  Happy Baking! M

That looks like a great loaf. I did a rye the other day with 500g rye/ 500g plain and it was a bit heavier than I like. I've only just joined this site - what's the book you're using? I use the Tartine method, only because that's what I got last Christmas, and that's what's working for me right now! I'd love to be able to do a ligher, fluffier rye (not in rye content, just texture).

The name of the book is "Local Breads".