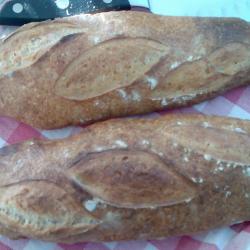 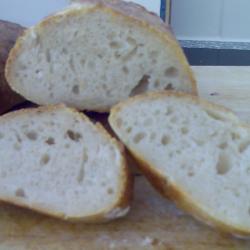 Guess what happened to me a couple of weeks ago??  I actually won something!  Made my day it did!  I had just resubscribed to my foodie magazine “Taste” and managed to win one of 9 give away sets of a Kitchen Aid stand mixer in “boysenberry” colour (which is just a posh name for purple!) and a 14pce Kitchen Aid knife set.  Brilliant!  I’ve only ever won a roll of film previously so was pretty stoked!  And even better it was delivered on my birthday, so hip-hip hoorah!  And couldn’t help myself, had to see how it worked on bread dough, so did what the man in the book said and gave it a whirl.  Not nearly as satisfying as kneading it yourself, but it was great to try – the bread didn’t turn out any better than “hand made” by the way.

So anyway, Kitchen Aids aside, next bread in Daniel Leaders “Local Breads” is baguette a l’ancienne, which I have actually made before in my previous life of just skipping through the book.  Shiao-ping has written a wonderful blog about this bread, but her source for the recipe were different to mine.  Interestingly after one quick glance I see that Shiao-ping’s post (ex Peter Reinhart’s BBA) says to use iced-water whereas Daniel says tepid – must try it Peter’s way as well to see the difference.

Method – as this is quite a wet dough, Mr Leader recommends mixing using a machine (which I now so happen to have) but it can still wrangled by hand (be gentle yet confident).

Autolyse flour and water for about 20 minutes, add the levain then the salt.  If you knead by hand you’ll need to do it with oiled hands on an oiled bench.  I like Dan Lepard’s technique of knead for 10 secs, then rest for 10 mins, knead for 10 secs, the rest for 10 mins (then again a couple more times), then let it rest for about half hour then give it another 10 sec knead.  If you knead it by machine (which I did) give it about 8 minutes on 3, then give it a  gentle massage by hand to get it looking nice.

Ferment in an oiled container for about an hour at RT, then fold.  Let ferment for another hour or two, maybe sneak in another fold just for luck!

Shape the dough into 3 baguettes (which I’m not particularly good at) or a couple of pointy ended batards (which judging by my photos, I’m not good at this either!).  Proof covered, in the fridge overnight for up to 24hrs.

Score them with 3 parallel slashes and bake at 230C for about 25 mins (don’t forget to chuck in some ice at the beginning for a bit of steam).

I remember enjoying this bread when I’ve made it previously, nice crumb, nice flavour, nice crispy crust, rustic looking and delicious, I think it would be nice with some rye flour in the dough as well.  Sorry about the slightly over-tanned end on the thin end of one of the doughs - the oven timer went off, I heard it, but forgot to remove the bread!  Duh!  the crumb on these wasn't as open as I remembered - maybe it has something to do with using Mr Boysenberry instead of my hands for mixing!  That'll teach me!

There is a variation making seeded petits pains, so I'll make some of those next (with a bit of rye in the dough) and not use Mr Boysenberry.

Very happy with this bread!  YUM!

Congratulations on winning a Kitchenaid!

Nice to see someone else's interpretation of the pain a l'ancienne. Your loaves look great.

I just received Peter Reinhart's BBA as a gift and started with the pain a l'ancienne (sourdough.com/blog/peter-reinharts-pain-lancienne). I think it's going to be hard to do any other method now that I've seen the results of an overnight chill. So chewy. So tastey!

Will definitely have a read through the BBA method and give it ago as well to compare.  It will be interesting to see the difference.

Well I gave the BBA method of l'ancienne a go.  Since it was yeasted I used the same recipe as the Local Breads version (SD), but used the BBA method.  Main variations were, using iced water to make the dough, the bulk fermentation done in the fridge (as opposed to RT), dough left to double at RT after fridge fermentation, then "shaped" and baked.  Peter Reinhart says to simply cut the dough from a square and then place on baking sheet, no other shaping required.  He also doesn't let the "shaped" loaves proof, but bakes straight away.

For what ever reason, the dough seemed a lot "softer" and harder to handle than my original - even though it was made with the same ingredients.  I didn't slash them, as I didn't think they'd play along.  As for any difference in taste?  I didn't try them side by side so hard to say.  A nice tasty bread, with a good crumb, crisp crust and nice flavour.

(Oh, and the bulk fermentation did go on a bit, as my plans changed, so it sat in the fridge for 48hrs instead of the intended 24hrs.  It would seem no harm done as one of my friends husbands claimed it to be the best bread he'd ever had and proceeded to eat an entire loaf!)

A variation in the book said you can make rolls covered with seeds - so I did.  Like I said at the beginning of my project, I'm going to make every bread in the book!  This is a great bread, and with the seeds = that bit tastier!  I used sunflower, sesame and poppy.  Made some mini baguettes, and some more rustic shaped rolls (as suggested) - all wonderfully delicious!

Sorry about the more bollocks than usual photos, I think I must have put a greasey paw print on the lens of my phone.