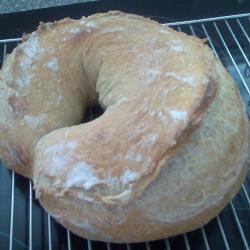 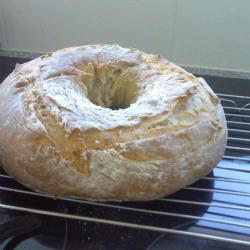 I'm now up to a new chapter in the book which focuses on bread from The Auvergne.  This area of France produces most of the grain used by the country's bakers - many old varieties of wheat and rye are grown here at high altitude.  The breads of this region complement the basic rustic local cuisine.  The Auvergnat bakers do not like sour bread, and their ryes are very mild compared with those of Germany and Austria.

So the first loaf in the chapter is one I have made ages ago on one of my random roams through the book.  It is the couronne (which translates as "crown" in English) and looks like a giant bagel.  It is a white loaf that is considered to be a specialty bread of the Auvergne.

I was making my loaf for a "Christmas ham bake" (19 men baking hams on Weber coal grills and drinking rather a lot of beer, while the women gossip and children amuse themselves!) this afternoon, but was out Thursday and Friday night after work, so I had to really plan ahead.  So I refreshed my starter on Thursday before I went to work.

Starter uses a stiff levain (45g) and is fed with  50g water, 95g AP flour and 5g whole wheat.  I let this sit and do it's thing all day at RT.  I made the dough after work - 340g water (warm), 500g AP flour, 125g starter and 10g salt.  Since I had to be out of the house minutes after I arrived home, these ingredients got roughly mixed together and slapped in an oiled bowl.  I left this on the bench whilst I went out and socialised @ about 7pm - I did mean to put in the fridge, but was in such a hurry to get out the door completely forgot.

Coming home at 12.30am (and on a school night!  Shame on me!) the dough got a bit of a knead, stretch and fold and shoved in the fridge.  Next morning when I crawled out of bed having had insufficient sleep and far too much to drink the night before, I gave it another stretch and fold, biffed it back in the fridge and  despaired that I had to go to work feeling quite so rotten!

So Friday night after work, I gave it another stretch and fold, let it rest for about 1/2 hour and then shaped it.  This requires you making a fat baguette shape about 18 inches long (so the book says), but I made it long enough that I could make it into a ring-shape and still have a decent sized hole in the middle.

I covered it with a dish towel and put it inside a couple of plastic bags, and yep, it got shoved back in the fridge again!  This has got to be one of the most retarded loaves I've ever made!

This morning I took it out of the fridge, heated my oven up to 200C (400F) and baked it for about 45 minutes.  So despite it's prolonged cool storage it looks pretty good for always being in a rush at each step!

I don't have a crumb shot as are taking it to my friends this afternoon, will try for one, but aren't holding my breath!  The circle wasn't as good on this loaf as on my previous bake, I seemed to taper the ends too much and not join them properly.  Here is a photo of my first attempt at this bread:

A much better "couronne" shape, but not as good a gringe!  Will have to do it again and try and achieve a better shape.

Your baking results look a lot like mine.  With the first one, beginner's luck  - the 2nd one, a retard. "So what! " says my hubby, " They are still edible."  And, I'd bet, the loaf was gone before you could take a picture of the crumb.

There were zero complaints!!