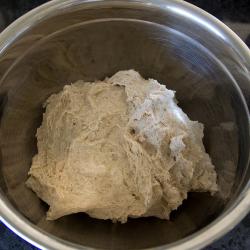 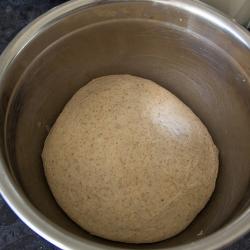 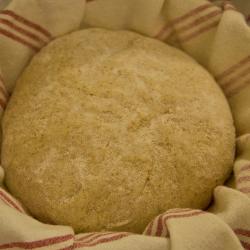 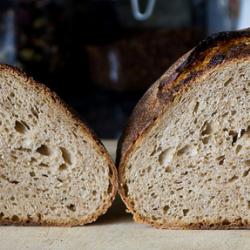 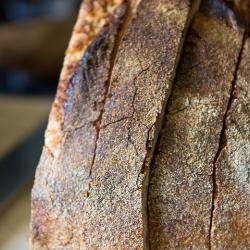 I spotted the below recipe on another site, thought I'd give it a go.

1. Mix all ingredients except the salt in a large mixing bowl.
2. Cover the bowl with a wet towel and leave at room temperature for 30 minutes.
3. Add salt.
4. Knead the dough by hand for a 5-8 minutes.
5. Place the dough in the oiled bowl again, cover with a wet towel and leave at room temperature for 1-2 hours.
6. Stretch and fold the dough about 2-3 times.
7. Shape the dough into a batard and place it in a flour-dusted banneton.
8. Cover the banneton and leave for 2 hours.
9. Preheat the oven to 240 C (I use pizza stone).
10. Place the baking sheet in the oven, quickly spray the edges of the oven with water or place water in the fat tray at the base of the oven (I use ice cubes).
11. Bake for 35 minutes.

Quite an easy dough to work with. I'd recommend this to anyone that is making their first steps into rye. Though the dough seemed sluggish to me, especially going on the times listed above. This is also a lesson in not being a slave to the clock but to the dough. I poked and prodded it for a good 10 hours before it felt like it was springing back at me, which wasn’t until during the proof.

I bulk fermented for 7 hours with three stretch & folds. The dough was expanding but there wasn’t any bubbles when I slashed it before each stretch & fold. This is what I mean by sluggish. I thought I had a dud dough so I shaped and set for proofing. This time I picked a smaller pyrex bowl instead of the stainless steel one I’ve been using.

More poking on the hour and it wasn't until the second hour had past that the dough felt like it had woken up. Could it have something to do with trying to bulk ferment/prove in stainless steel? Is it too cold? I like the taste to this bread so next time it will be in a glass bowl for resting in. Glass has better thermal properties so this could make a difference. Around three hours of proving and I was beginning to think the dough might be starting to stick to the rice flour dusted tea towel, so out it came. The dough felt like it was in better shape after being in this smaller bowl, so I will use it again.

My last two loaves have had quite average slashes. Not sure what is happening here, more practise I guess. I used a hotter oven than suggested, 250-260°C. Within 5 mins the dough was knocking on the lid of the clear Pyrex casserole dish that I use, so in I went and removed it and turned down the heat to 240-250°C. There was a dish of water steaming away in there for the whole bake too. Having an electric oven, the top elements were starting to burn the top so I dropped the shelf one notch. A probe at the 30min mark and another at 35mins then out it came.

When I bake a loaf that’s 800g-900g, it seems that 35 minutes gives perfect results. I pre-heat at 260°C, then reduce heat to 245°C for the first 20 minutes of cooking, then further reduce heat to 230°C. I get great results and a nice crust coloration. I block the oven door slightly open with a wooden spoon for the last few minutes to help let the steam out and get a crustier crust.

Your rye loaf has great internal structure with gorgeous bubbles. The taste must be fabulous.

Thanks for your knowledge Hugo. I’m very happy with the taste :)