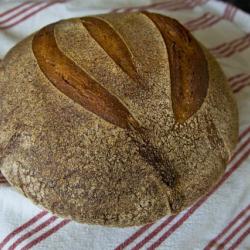 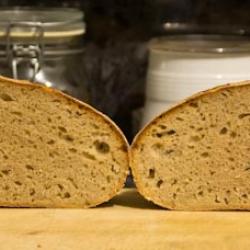 A repeat on the #10 recipe with all the flours being from the same batch. This time the initial mixing/kneading process felt a lot better. Last time I had tiny lumps through the dough & water phase that were hard to get out. This time I used my hands (instead of the masher that I use most of the time) exclusively. Such a good feeling. It felt a touch less hydrated too. I’m guessing because all the lumps that I had last time were now not there and the flour was consistently hydrated.
I think this time there was one more “rest, stretch & fold” than last time. Ambient temperature was around 16°C. The shaping was a little easier and I was also prepared for the fact that it was going to be difficult, so it was stretch & fold then into the proving bowl with a little tightening/gathering of the dough once in there. This time I used a 50/50 mix of rice and rye flour on the proving tea towel. No sticking this time!
A 10hr retard in the fridge overnight with a morning bake. I’m liking this schedule.
With my poor slashing lately, I decided to use a razor blade to see if there was any noticeable difference to the box knife I’ve been using. It felt like there was. This combined with something I read here by Hugo about spraying the loaf a couple of times during the rise also helped give the loaf it’s look I think, which I’m really happy with. More importantly, to me, it tastes awesome! I’m thinking this is my best loaf to date:) It makes me want to get right back in there and bake another.

Hey great stuff dude! Looks awesome! I would have thought rice flour may be sticky but I've yet to try that so thanks :-) Also, how long did u bake for and what temps? I've only just baked my first sou sourdough which tastes superb especially the 50/50 rye and white mix! Might try retard proofing in fridge if it really makes a difference?

I'm not sure if it makes a difference but I should add that the rice flour I have is brown rice flour.
Bake time was 40mins. It feels like I'm getting a better feel for the temperature blast start then step it down as the bake progresses technique. It also makes for fun viewing as the pyrex is clear glass. The last two loaves have been something like this; Oven flat out and pre heated. This turns out to be around 250°C for my oven. Out comes the Pryex dish that has also been in there during the pre heat with two small dishes of oven temp water roll boiling away. These are on the last run for the wire shelves below the centred wire for the loaf.
Dish goes in with the dough that has been sprayed with water on top then I wait till the thermostat turns off again before letting the oven come back down to 220°C. This stays there for around 20mins, then it is reduced down again to 200°C till it is done. I check with a temp probe and it’s been usually done by the 35-40min mark. Out it come then I rap it in a tea towel for a good 12hrs before cutting into it.
The retarded final proof for me is more of a way to brake up the bread making process so that it’s not a long, dedicated process. I do prefer to not use the fridge, especially in this early stage of my bread making experience as I find it harder to read the dough if it’s been refrigerated. But life is busy and it helps one work around it and still get to enjoy your own baked bread.

That's quite a process you go through in terms of temperature but if that's the end result it's worth it :-) I do something similar when I bake but I throw in the bread at 220c for 10 mins then give it another 25-30 mins at about 190c! The crust on my pure white sourdough was slightly thicker than normal and once cooled it was actually slightly chewy which I weren't a fan of. My rye and white mix sourdough didn't have that thick crust (baked together of course) but actually the bread was more softer and more crumbly (?) Than the white. And tasted way better too! It was my first time ever making and eating sourdough but loved every bit of it and it's great to see helpful and enthusiastic people such as yourself offer great advice and tips... So thank you very much! I'm baking in a few days so I'll let you know how I get on this time with pics! I think rye flour mix seems to need more proofing time? Thanks again

I'm not sure on the rye flour question, sounds right though. One thing I have read is that rye is delicate so less kneading is better if you want good dough development. This is something I’ve been conscious of with the last two loafs. Less kneading with 3-4 stretch & folds during the bulk ferment stage. At this stage I’m purely going on peoples word and yet to do any of my own real experiments.

I honestly didn't know about the delicateness of rye dough! I will look into it and be sure I keep an eye on it next time! I actually did knead it quite a bit and struggled with it slightly in terms of building up gluten. And the dough actually came with much less "holes"in it compared to the plain flour one! Cheers for the heads up though Bud!