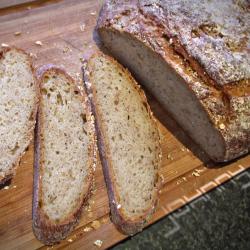 Tried another Rye variation this weekend. This one had 50% light rye and 10% cracked rye & rolled rye and oat flakes in a soaker. I don't know why but my rye dough seem to rise nicely but then just when I put it on the peel it deflates and I don't get the oven spring I am aiming for. Still this crumb was very nice and the bread has a great sourness to it and nice soft texture with the oats.

I never seem to get much oven spring with my rye breads either.  I think that's just the way rye is - delicate.  In fact, the recipe I use most often for rye http://www.wildyeastblog.com/2008/09/21/47-rye/ tastes great and certainly doesn't spring.  Do you proof it in a bannetton or couche? I think your loaf looks wonderful -  :o)

Don't have a picture of the crumb, but its reasonably tight and looks pretty much like the one on Susan's webpage.  I think rye is just a bit special needs and doesn't react the same as other flours.

and flavourful, Karniecoops and Johnny!...your breads, I mean. Ditto, Kc, on the lack of spring in ryes.

hey Johnny, I've just read through a couple of LeadDog's rye recipes on his website - Classic Auvergne Dark Rye and 100% Rye - and he gets a great rise out of his loaves, but uses a dutch-oven.  They are really great loaves - check them out.

Plus Nils (theinversecook) also has a couple (at least) of great looking recipes on his website 66 percent rye and German country bread.  He does mention the country bread gets a good lift in the oven and the picture of the 66% has a nice rounded top, so I'm thinking the same with that.

So there is hope yet!  I only have one stage in preparing my prefermet and LD used 2 for both his, and Nils says he leaves his for 18-24 hours before using.  I only left my overnight or all day like I do my white starter - perhaps mine just isn't quite at its best when I use it?  Or maybe its just less than ideal NZ flours?

One of the reasons I started making sourdough was because I missed all the wonderful breads that I could readily buy when I lived in Germany.  I'm going to keep plugging at it and hopefully will get a bit of spring, but if I don't I'm still really happy with the flavour and texture of the breads without the spring.  So there's four rye receipe's to keep me off the streets over the next weekends :o)

Nils has some interesting recipes and I like the idea for the German country bread. I don't really have any history growing up with rye. As a kid we were all bought up on the typical aussie white sliced tasteless stuff. The only break from that was occasionally mum would get a vienna loaf.! woo-hoo..and we thought we were very sophisticated and continental eating vienna loaf :)

Growing up in the late 50's white anglo-dominant world we thought rye bread was that wierd stuff 'wogs' ate. All I can say is thank god for immigration or we all would still be eating stodgy meat & 3 vegs. I love the diversity we now have and I celebrate our multi-cultural society.

So I keep coming back to have another go with rye. I have checked out most of the rye threads on this site and played around with Boris' formula, here.

I've liked pretty much everything I've made although I'm not sure if I am a real hard core 100% rye kinda guy.....still,  I think I'm acquiring a taste and something about rye just keeps bringing me back to it. Maybe I have to learn to love it for what it is and not keep expecting something different..,,,if that makes any sense

Been doing some more reading on rye breads and have found two wonderful blogs on this site with LOADS of info in them: http://sourdough.com/forum/100-rye-and-potato-rosemary-loaf and http://sourdough.com/forum/topic/930. I've got a batch of Nils' German Country bread on the go at the moment, but really want to try Boris' 100% rye - so little time, so much bread to make! :o)

Well it would seem I'm as a dense as a 100% rye loaf - just noticed you've already seen Boris' blog!  Oh well!  I think rye is something you either love or hate - it is very different.

Ha ha..like I said I keep coming back to rye...

have recently bought Daniel Leader's "Local Breads" book, and am reading through it (and today baking from it).  He says "Rye and other flours have little or no gluten forming potential.  This is why all-rye breads don't rise as much and have a tight, closed crumb structures, and why most bread recipes include at least a little bit of wheat flour."

So I think your rye/oaty/grainy bread above is superb! :o)