Well I finally got around to making Graham's roasted pumpkin bread and I am very happy with the results for a first attempt. I left the decision too late in the week in order to have the roasted pumpkin pieces ready for when I mixed up the dough. Because I had to slow roast them for 24hrs, I did not have them ready until I was folding and proving my dough the next day, so I ended up adding the pumpkin at the very end.

I started baking the pumpkin (Butternut of course) in my gas pizza oven but I couldn't keep the temperature down low enough so I used my kitchen oven which is fan forced and I think rather than making the pumpkin 'malt' it made most of the pumpkin turn into a hard dried pieces which I couldn't use. So having started with 350g I ended up with only 109g of usable baked pumpkin.

For the soaker I did not have any maize meal so I substituted 25g of multigrain mix which included maize and 25g wholemeal rolled oats. My final dough was probably around 65% hydration which is a little low for me.

The smells while baking were wonderful and I couldn't wait to try this sweet loaf.

So when it cooled sufficiently I cut this little baby open...

This bread had a wonderful complexity of strong flavours with the taste of sweet pumpkin, the sour wholemeal and rye and the nice nutty crunch from the crust of sunflower seeds on top. It was a bit heavier and denser than I would have hoped for but I think this was to do with the hydration and I could have baked it a little longer. I could not bake at my normal time (Satuday mornings after retarding overnight in the fridge) so it spent an extra 6hrs retarding in the fridge which I think intensified the flavours even more.

Still, I think this bread is a winner I just wish I had a better way to produce the lovely malted pumpkin Graham can produce in his cooling brick wood-fired marvel. This bread does look fantastic as well as taste so good and I love the way those little orange gems of roasted sweetness poke through the slashes.

Looks absolutely wonderful Johnny!  I can't remember how Graham cooked his pumpkin, so will have to go and have a look  Did you really roast it for 24hrs??  Crikey that's a while!  Maybe you'd have to add some moisture to the oven otherwise you'd end up with pumpkin crisps/chips!  did you bake it in a roasting pan with lid on or off?

Thanks K, yep pretty much well... not entirely - I think it ended up being around 18 hrs. They were just baked open on pizza trays and you are pretty close with the pumpkin 'chips' as an apt description of the results..ha ha

I still have 1/2 a pumpkin left and I am going to try again but this time I think I will not try to replicate Graham's long slow roast and just bake them at a low temperature for 5-6 hrs and not let them dry out as much. I think the idea is to remove much of the moisture so the pumpkin holds together in the dough. Graham says the pumpkin "malts" which I assume means it dries out and all the sugars come to the surface and the flesh becomes sticky and firm? Some of the bigger pieces were like that for this attempt, but the smaller thinner bits were really hard like dried fruit. But I must say this long slow bake intensifies the flavour and makes the pumpkin really sweet.

This bread has a delicious taste and makes sensational sandwiches...so all the effort is worth it.

Sounds fabulous!  Hey I just went and had a look at Graham's pumkin blog and found this under "dough":

Steamed pumpkin is added to the dough towards the end of the mixing. I also add the cooled pot juices with their colour and flavour, and any herbs (rosemary, thyme), spices (nutmeg) and salt that were in the steamer. I'm currently using a strange 'rotating paddle' type mixer which does not work well with wet dough...it takes a long time to develop and builds up too much temperature over time.

Did you add some of this in as well?

I did add the steamed pumpkin and I used some of the hot water from the steamer for the soaker. I am having another go at this on the weekend. I mixed up last night but this time I added the baked pumpkin just at the end of the mixing. The dough looks very similar to Grahams so I have it sitting in the fridge today. Tonight when I get home from work I will pull it out and do some gentle folds over 4-5hrs while it is proving before shaping and final proving and back into the fridge to retard overnight. I just baked the pumpkin over a few hours and covered it for the final hour and I think it is better this time . Cheers Johnny

Just had a nice slice of Graham's roasted pumpkin sourdough. It was incredibly moist and delicious. This time I kept closer to Graham's recipe and used an organic unbleached white bakers flour and added a little more water. My roasted pumpkin was around 250g this time and I used a 50g soaker with half multigrain and half rolled oats and 100g of the pumpkin steaming water. 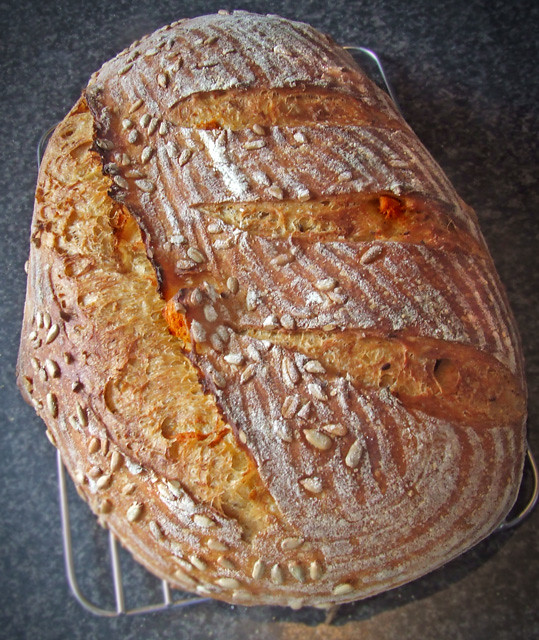 The loaf was huge and kind of spread out as soon as I slashed it and the dough was pretty wet. 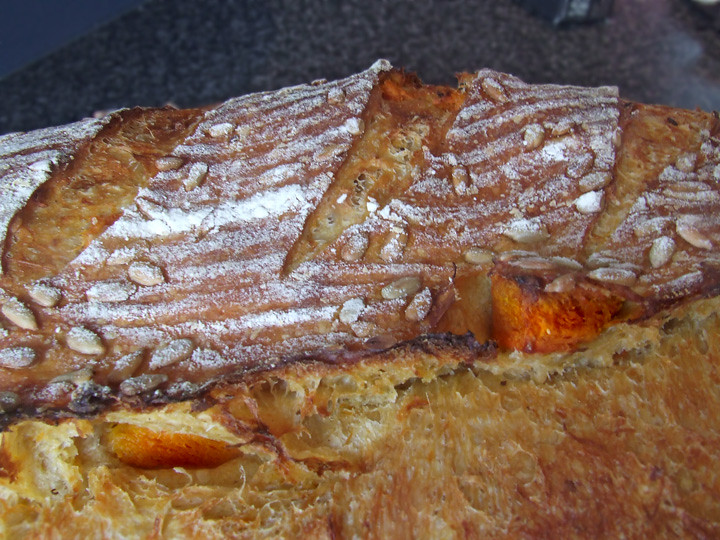 I threw in a handful of ice cubes for steam for 10 minutes and then baked for another 40 minutes. I love the bright orange bits peeking out. 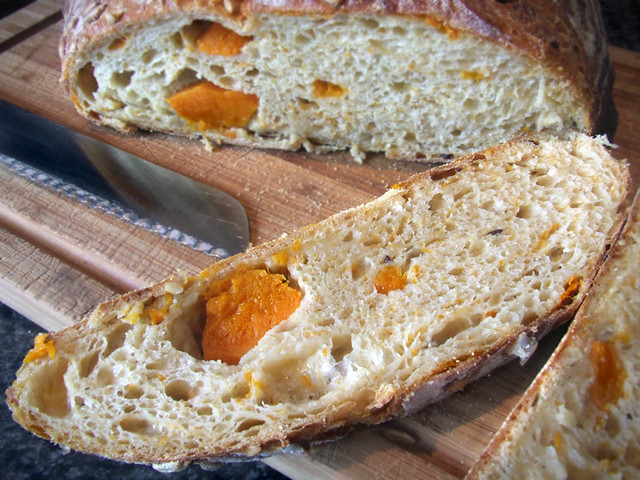 As you can see this loaf was much less dense and lighter than the first attempt with a lot more, bigger chunks of pumpkin. The crust was thin with a bit of chew but not too much. 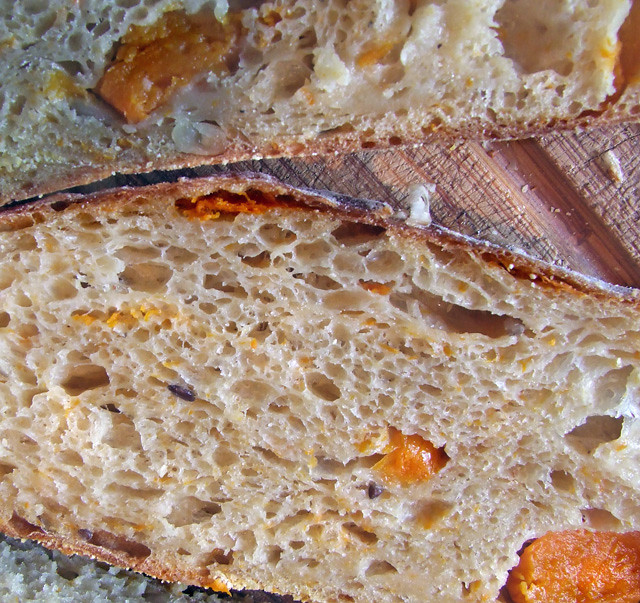 You can see how moist this bread is which I think was a combination of the oats in the soaker, higher hydration overall and more moisture in the baked pumpkin than last time. I am really pleased with this attempt as it is much closer to the look and texture of Graham's and I really like the moistness combined with the beautiful sweet globs of pumpkin. I will definitely add this to my repertoire of flavoured breads as one of the best.