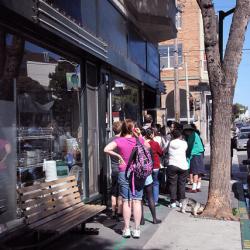 It was getting on closer to lunch time and you could tell this is a popular place! Fortunately, I had pre-ordered and paid for my bread. This meant we didn’t have to wait in line. Unless of course we wanted to sample any of the other items the bakery had to offer. As we worked our way into the crowded bakery I looked for something that would indicate where I could pick up our bread. All the while I was trying to snap some pictures of the bakery. Finally my wife grabbed the attention of a young lady behind a counter and told her we had come to pick up some bread. She quickly told us that bread is not available until after 5:00 pm before I explained that we had pre-ordered. Soon enough, we had our bagged loaf and were making our way to the outside.

One thing I did notice was the lack of any of the scents you would expect from being in a bakery. It was a stark contrast from where we had been earlier. The place was packed with people all either waiting to order or eating their meals. Tartine serves sandwiches as well as pastries. We never were able to get close enough to see just what all they had to offer though. Once back in front the bakery we had to choose if we wanted to hop in line and wait or look elsewhere for lunch. Having read some reviews on-line I knew that if the line stretched in front of the bakery that you could expect to wait at least 30 minutes to make it up to the counter. If you ordered a sandwich you could expect to wait at least another 20 minutes or more for it to arrive.  We opted to take our bread and hike back to where we left the car.  In fairness to Tartine Bakery, we knew to expect a long wait because of its popularity and had already decided to try another eatery a couple miles away. I had really come for the bread and had that in hand.

So what about the bread? In this video you can see that Chad bakes his loaves to a dark color. He talks about the crust coloring beautifully because of the sugars caramelizing from the long rise time the loaves get. Unfortunately my bread was either baked to the point of being burnt or I don’t appreciate the flavor Chad is going for. I’m going with burned crust! At least it was in my point of view and taste. Once I got past that and looked at and tasted the crumb I was a little happier. The crumb had lots of holes like I would expect to see in a loaf of ciabatta bread. The flavor was a very strong sour tang. It no doubt took a good deal of time for Chad to develop his “Country Tartine” and it’s obviously very popular but I couldn’t get past what I took for a burnt crust. I’ll have to assume that it’s usually better and that maybe I just got a bad loaf.