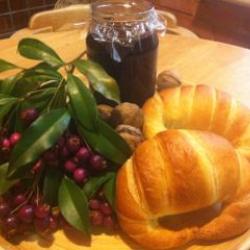 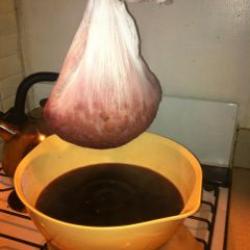 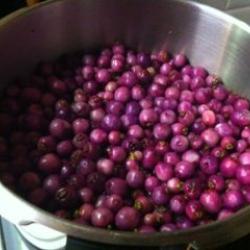 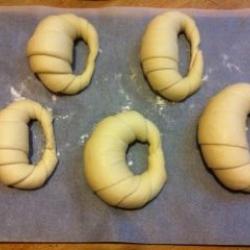 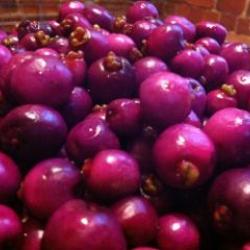 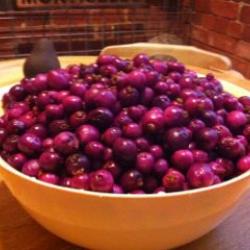 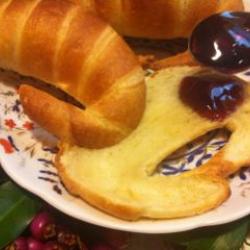 Sourdough Croissants and Lilly Pilly Jelly  This weekend I decided to take a break from the old oven restoration. When we arrived in Nathalia on Friday night the large Lilly Pilly tree in the driveway had dropped one if it branches due to the weight of fruit. I had heard that the Lilly Pilly fruit could be made into a Jam or Jelly so I figured why not relieve the tree of some of its burden and give it a go.  Lilly Pilly is an Australian native tree that has fruit ranging from yellow to red and deep purple. Like many Australian native foods it can be delicious if prepared correctly but is rarely seen commercially in either restaurants or super markets. We really are blessed in Australia with great produce but we are obsessed with European and Asian foods and tend to ignore the native foods freely available at our back door. Lilly Pilly Fruit (Berries)  Anyway, it had been a busy week at work so the task of carefully picking, de-stemming and washing the tiny fruit would be quite relaxing, almost meditative.  Now the question was what to bake to go with the jelly? Well, it had to be LeadDog’s Sourdough Croissants. I had made them before and method of folding and rolling to build up the layers also seemed like it could be greatly therapeutic.  Following LeadDog’s recipe, on Friday night I mixed the dough replacing the sugar with a tablespoon of Light Agave.  The Agave really enhanced the flavour of the final croissants, perhaps adding a little sweetness but it was not overpowering. I gave the dough a couple of stretch and folds before going to bed and left it on the bench to bulk ferment. LeadDog’s recipe bulk ferments in the fridge but my starter was a bit tired so leaving it out at 16-18 degrees C gave the little yeasties a chance to multiply. I wanted the yeasties to be strong and healthy for the final rise so they could lift the dough even with all that yummy butter folded in.  Saturday morning I woke to find the dough had doubled in size. I punched it down and shaped into a rough square. Wrapped in cling film the dough was placed it in the fridge to cool down and firm up in preparation for the fold and roll process.  Now it was time to pick the Lilly Pilly.  They are an interesting little purple fruit with not much flesh. They taste a little like a tart Nashi Pear. It only took about ½ hr to pick 2kg of fruit which I thought would be enough to experiment with. Then it was time to light the fire, put on some music, and started the laborious process of washing and de-stemming. The little berries had a few surprise hidden in the bunches. Every now and then small green and brown spiders would make a break for it, over my hand and up my arm.....making me question, “I hope the Jelly is worth this?” 2 kgs of Lilly Pilly, washed and de-stemmed  After the being washed several times the next step in the process is to put the berries into a large pot, add water and bring to a rolling boil. After about 1 hour the berries had released their purple goodness into the boiling water.  Whilst the Lilly Pilly where bubbling away in the pot I began to build up the layers of butter in the croissant dough. Refrigerate, rest and then fold. Refrigerate, Rest, Fold...and so on. I love this recipe, thanks LeadDog. After shaping the croissants took about 3 ½ hours at approx. 19 degrees C to complete their second prove. For the glaze I also replaced the sugar with Agave. This glaze was definitely better that the usual glaze. The Agave seemed to remove any eggy flavour which I must admit I don’t really like. LeadDog's great Sourdough Croisants, risen and ready to bake.  Now back to the Lilly Pilly jelly. The liquid from boiling berries needs to be strained very gently, never squeezing the fruit, so that the final jelly is not cloudy. I used cheese cloth to strain the fruit, hanging it above a bowl. I ended up with one litre of liquid to which I added 1kg of sugar and the juice of two lemons. The sugar & juice mix was then bought up to a gentle simmer in a large stainless steel pot. To test if the jelly was ready I put a plate in the fridge and then dropped a tsp of the jelly mix onto it, if the jelly spread then it was not ready. It took about 30min for the jelly to reach set point I was after. The jelly was then placed in jars and then left to cool/set. The Lilly Pilly draining in cheese cloth.  One of the great things about LeadDog's sourdough croissants is how they re-heat in an oven several days later. In fact I think that re-heated the next day they are even better than freshly baked.  Saturday night I went to bed completely relaxed after a full day of kitchen therapy. On Sunday morning I woke to enjoy a perfect breakfast, a Sourdough Croissant with Lillly Pilly Jelly…Yum!