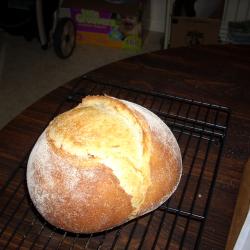 I apologize for the energy of the title.  I am just overwhelmed that my bread-making goal of several years now has come to life.  I was able to make a round loaf that looks like an artisan bakery loaf.  As it turns out, it is really very simple when you use a few clever techniques that many videos on youtube are willing to demonstrate.  I made a very simple recipe, king Aurthor's recipe in fact.  It was a sourdough, though because my starter wasn't sufficiently fed I added some active dry yeast as well.  In reality, it really wasn't "sourdough".  Having no time to ferment or have the sour work on the bulk of the flour, it was basically white bread.  Furthermore, because the recipe banked on having the taste come mainly from the sourdough, the final result was slightly bland, needing salt mostly.  However, I made it rise UP instead of just flattening out!  I dreamed about it the night I made it I was so happy.

Anyway, the techniques that made all the difference were the stretch and fold and the tension pull.  After letting the dough Autolyse for 30 minutes I kneaded for about ten, then did a stretch and fold, pulling one side of the dough over 1/3 of the dough, and doing the same with the other four sides.  After, I let it rest 10 minutes and did the stretch and fold again.  I repeated this three times in total, leaving it to bulk ferment after the last time.  Having active dry yeast in it, this only took about 2 hours.  Now here is the part that really mattered, the part that apparently makes all the difference.  After bulk fermenting, the gluten has somewhat kept its strength from all the stretch and folds.  However, the gluten has relaxed to the point where it wants to have one final tension pull.  I did a final tension pull on the risen dough, something I had before thought would deflate the dough.  No worries, it doesn't.  I scored deeply the ready to bake product and tossed it into a preheated dutch oven.  Here is a picture of the final result.  I hope this helps someone out there!

I tried this method and I was really pleased with the results. Like above my loaf came out good enough to sell. I've not tried it yet, hopefully out will taste as good as out looks. Thanks for the post. Nick