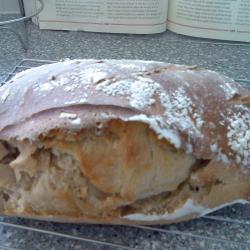 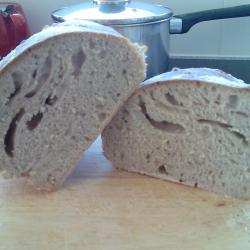 Well actually the next bread in "Local Breads" is Croissants sur levain liquide, but I had received a request for bread from a friend for a BBQ so made some Pain de campagne, and thought I was brave enough to give this Spelt loaf a try.  When I say brave enough, I did have the campagne as a sure-fire back-up, as my first attempt at using spelt was a complete abomination!!  Check it out here!

So I did slightly break my rule about making each bread in the book and not sneaking forward, but I have made the croissants a number of times after being inspired by LeadDog and know they are just brilliant.

The Whole Spelt Loaf is the last in Mr Leader's chapter on Parisian Breads, so I couldn't really skip it could I?!

Instead of creating a spelt starter, the recipe uses a rye starter, which just so happens to be of of the 3 starters I have hanging around in my fridge, so fed it up I did with some medium ground rye and water (133% hydration) the night before making the dough.

Curiously enough there is honey in the dough, which is said to speed up the fermentation and gives the otherwise earthy bread a bit of sweetness.  All of the flour (other than the starter) in the dough is whole spelt (500g), and to this we added all the other ingredients (50g starter, 275g water with 50g honey dissolved in it, and 10g salt).  This time there was no autolyse step, I suspect because the spelt flour has little gluten, so what is the point.  That said, in his introduction, Mr Leader says the gluten will take quite a while to develop, so I wonder why no autolyse??  Maybe it's too delicate for the autolyse step to be effective, but responds better to a prolonged knead?

I used Mr Purple my kitchen aid stand mixer for this job, and the mixing was much more extensive than anything I've done previously.  It started off on slow for about 7 mins, then we cranked it up to medium - which is quite fast on the mixer I thought.  I was nervous it was going to jump itself off the bench at one stage!  After the 7 mins at the second speed, the dough was nice and shiny and elastic.

After a 2.5hr fermet at RT, the dough was lovely to touch - stretchy, silky - so much better than the slop I created last time around!  I think using a set of scales is very important with spelt as the flour has a completely different feel to it compared with wheat flour, so I'm guessing I completely stuffed up my ratio of flour:water in my previous attempt.  The dough was shaped into a "Pan Loaf" and proofed in a loaf tin - this is a first, I haven't made bread in a tin before (........... actually that's a lie, I have used a loaf tin for some very wet seeded rye loaves .......... but it's been a while!).

After 1.5 hrs proofing it didn't seem to expand much, and certainly wasn't the 1.5 times it's original size, nor was it anywhere near the top of the pan!  I didn't measure my pan, so it was probably the wrong size (she thought hopefully to herself).  When I tried to slash the loaf, all it did was stick and drag, so I gave up!  Baked it at 200C for about 35mins, but which time is was a lovely smokey brown colour.

What is with the curious shape on the upper side I hear you asking?  Well, you can see the chicken stratchings across the top, which was my attempt at slashing, so clearly the spring came all out the side of the loaf and it didn't push up in the middle - perhaps I should have perservered with the slashing, as the big blow out is quite something!

So what did I think?  Well it was a million times better than my first try with this delicate flour, the colour of the loaf is lovely, thin but nice crust and a really nice flavour.  As strange as this may sound, the texture of the bread in the mouth was really smooth, quite different to wheat flour.  So the blow-out not withstanding, I took it to my friends BBQ and they all thought it was great and that I should make it again.

I'm not sure where this website is from but the recipes sound wonderful.  I'd love to try them all, but I don't know how to convert them from metric to what I understand.  I am so excited that you made things without using yeast.  I have my sourdough starter ready to use, but don't have a good recipe.  I've always loved sourdough and now I've found out that my granddaughter is gluten intolerant and on greensmoothiegirl.com I learned how bad yeast is for you.  If anyone can help, I would really appreciate it.  I have quinoa, spelt, millet, sweet brown rice and kamut flours to use for her instead of whole wheat.  Thanks for all your help.

Hello Barbara - welcome to this sourdough website!  There are loads of fantastic recipes on board so have a search around.  I have kind of included the recipe for this spelt loaf in my dialogue, but didn't want to breach copyright by typing out all the details but have given rough measures.

If it helps this dough had 500g spelt flour (17.6 oz), then 10% this weight in rye flour, 55% water, 10% honey and 2% salt.  So you can calculate the imperial weights of all the other ingredients.  The making instructions are more or less above with approx times - room temp here at the moment is approx 20C give or take.

I have also made a buckwheat flour loaf, but it also had wheat flour in it, so probably isn't of much use to you.  Sorry, haven't made many other wheat free loaves other than rye, but most of these have some wheat it them too.  I know there are some recipes for 100% rye on this site, so you'd just have to search for them.

All the fun is in the trying!

I miss baking in my fire wood oven back in my province. If only I can find a way to bring that aged old oven here in the city!