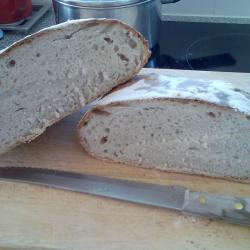 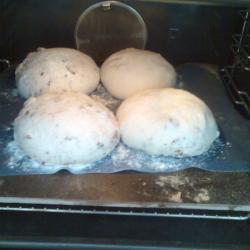 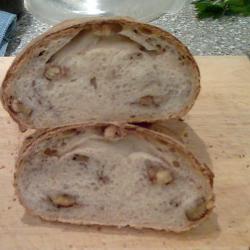 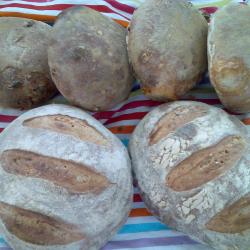 Whole wheat sourdough miche, inspired by "Pain Poilane" is the first bread in the 2nd chapter of Daniel Leader's book.  So unlike the first chapter which covered Parisian breads, both yeasted and made with liquid levain, it would seem this chapter uses stiff sourdough starters instead.  Reading the very interesting prologue to the chapter, a stiff levain ferments slowly, with very little acid build-up.  It should be kept cool so it doesn't get too sour and therefore produces bread with all the flavours in balance.

Luckily I have a stiff starter in my fridge, so didn't have to pfaff around making one before starting my bread.  But there are very good instructions in the book for making one from scratch if required.  My stiff starter (about 50g) was fed with 75g water and 100g whole wheat flour to kick off this bread.  This was left to ferment overnight before making the bread.  The starter is the consistency of dough and rises up to be a lovely domed spongey thing with loads of air pockets.  I made it in a glass bowl with the intention of taking photos, but like an idiot I had scooped it all out to make then dough before I remembered!

The 400g whole wheat flour, 100g of AP flour and 375g tepid water are left to autolyse for 20 mins, then 225g of the stiff starter and 10g of salt are added and I kneaded it all together to disperse the salt and starter into the autolyse.  I gave it my typical 10 sec kneads on an oiled bench about 3-4 times, the left it fermenting in an oiled bowl and gave it a fold or 2 every half hour for about 3 hours.

The fermented dough is formed into a miche ( which apparently translates as "butt cheek", and is just a nice big boule) then placed into a floured banneton (or lined colander/bowl) and left to ferment for about 2-3 hrs at RT.  After this time is was wonderfully pillowy and looked gorgeous.

It was cooked in a REALLY hot oven (book says 470F, so I just turned mine up to its best) after slashing with four slashes around the edge making a square "frame".  It was cooked with some ice for steam, for about 50mins, which seemed like a long time, but it was a big loaf, and you sure don't want it undercooked.

I was very happy with the loaf, it had a nice crust, and good flavour - even though my slashes looked a bit rubbish (I think the loaf may have been slightly over-proofed).  The crumb wasn't very open, but I hadn't made a wholemeal loaf for ages, so couldn't remember how it should have been.

It got gobbled up in a flash with some nice olive oil, cheese and a glass of wine (or two) at a friend's house, and there were no complaints!

A variation of the bread recommended in the book, is French walnut bread - "Pain au levain aux noix", so make it I did.  I got a bit carried away with myself and forgot to slash the poor wee loaves - made 4 wee ones instead of one Mr Biggy.

So they didn't get to spring much in the oven as were trapped inside their skins, but they also didn't rupture, so came out looking like big un-crossed hot cross buns!  That's them all in a row in the below photo:

In the front of the photo are two more butt cheeks, but I had a bit of a moment and slashed them in the wrong format, still tasted just as fine!

The walnut babies were surprisingly nice!  I don't much care for walnuts, but since I'd avoided using them everytime I've made a "flavoured" pain de campagne, I sucked it up and used them this time.  Slightly toasted them before putting them in the dough.

I'd definitely recommend the aux noix version, very tasty.  Once again, the friends were all very happy, so good result :o)

Made some more of this while staying in a lodge in the middle of the Kaimai ranges over the holiday weekend.  There were 33 people staying for the weekend, so I made a couple of big batches of bread.  Used a coarser wholemeal flour which I think was nicer.  I even braided one of the loaves!

This dough was so nice to work with I could have had my hands in it all day!  These loaves were much improved on my first attempt.

YOU'RE good value to have along on hols! Did you get any of the others thinking about baking their own? No more compelling precedent than a room full of the aroma of baking bread - except the delicious aftermath!

Any chance of a crumb shot? :)

Sorry, no crumb shot.  They all thought I was weird enough taking these photos!  Plus I had to fend off the ravenous kids just so I could take these!  A couple of the kids were entranced by the whole process and kept coming back to the kitchen whenever I went there so they could watch.  One of the boys said he made bread at home in a bread maker, but this was "way different"!

As for the adults, I felt extremely under presssure when i found out one of the party used to be a baker!  Crikey I was almost stressed!  He had nothing but good things to say, but did suggest adding more salt.  he said they used to use about 3%.  most of the books I have say 2%.  So today i'm making some Pain au levain I am about to write a post about, but have used 3% salt.  it'll be interesting to see how much longer it takes to proof and how it tastes (it is the batard in the above photo - with addition of linseed).

oh, and the little midget boule on the side is one that one of the kids kneaded to within an inch of its life.  Abby ate it too bless her!  it must have taken a bit of chewing, but she was thrilled :o)