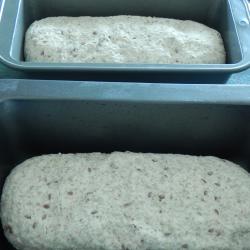 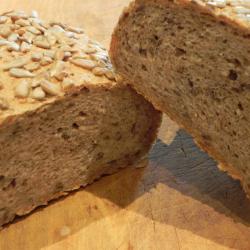 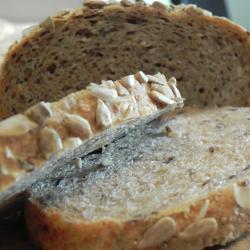 Bread 2 from the German Rye section of Mr Leader's book, and made yesterday so I'm happy to say I'm still enjoying it!

I refreshed my rye starter at 8pm on Friday night - 50g rye starter, 100g water and 75g medium rye flour - and let it sit overnight at RT.  Saturday morning was dough making time.  Stupidly I realised in the morning that I had forgotten to soak my seeds overnight so the dough making was delayed an hour while I quickly through together my seeds - 28g each of flax, sesame and sunflower + 175g water - and let them soak till the water was mostly absorbed, about 1hr.  I definitely recommend the overnight soak, as the seeds tend to hold the moisture better and moisten the dough as it bakes and keeps the bread fresher for longer.

The dough - 50g of my bubbly starter, the seeds, 300g water, 300g bread flour, 200g medium rye flour, 10g salt and 5g yeast (I did add in the yeast this time, as I was taking this bread to a friends place for dinner, and it wouldn't have been ready if I'd gone straight SD . . . thanks to my seed soaking error and subsequent late start!).  The dough was quite sticky and for what ever reason I decided to knead on a floured bench (instead of my usual oiled bench) and I ended up incorporating a bit too much extra flour into the dough.  I did a 10s kneads every 15 minutes with a rest in between (3 times), then put it in an oiled bowl to ferment.  By the end of the 3rd knead it was considerably less sticky.

While it fermented I walked down to the beach for a swim, a lie in the sun and a bit of a read . . . then a couple of hours later I came back and shaped it into 2 log-things to slot inside my loaf pans.

i brushed the tops of both loaves with a bit of water (a spray bottle was recommended, but I didn't have one) and pressed on a good covering of sunflower seeds (recipe says 1/4cup). Next time I make this bread I think I'll not use the loaf pan, but will instead either use a bannetton or just leave free form in a couche - the dough would have been fine proofing out of a loaf pan.

After 1hr at RT it had risen nicely and I slotted both loaves into a 200C oven and baked for 45 mins.  The crust didn't turn deep brown as Mr Leader suggested it would, but once the sunflower seeds looked sufficiently toasted and the bread had come away from the sides of the pan, I decided enough was enough.  Maybe the lack of colour was due to it  being slightly over-proofed?  Next time I'll bake it earlier.

Luckily I had to take the dog out for a walk before going out for dinner, so I wasn't tempted to try a slice while the loaf was still hot!  By the time I got to my friends house, the loaf had cooled sufficiently and we enjoyed it straight, with a bit of butter, with a bit of cheese . . . . . and today I enjoyed it for breakfast with marmalade, goats cheese and a bit of pate . . . . . good with anything or nothing this bread!  Fabulous!  Definitely need to soak the seeds overnight next time.