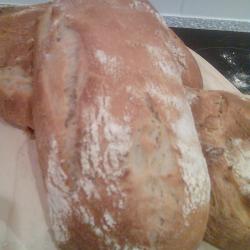 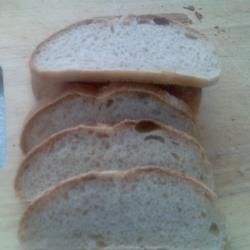 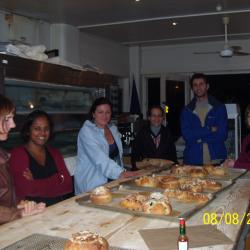 I went to a French bread making course a couple of weeks ago.  It was held at Boulangerie l’epi on St Michaels Ave in Ellerslie.  Thierry the baker, makes only sourdough French breads, and does a 3-hour evening course on basic bread making.  He includes is method for making a starter from fermenting raisins.  I learnt plenty and thoroughly enjoyed myself!  Went home with 4 loaves, a pizza and a wonderful sourdough French dessert/cake called Kouing Amann – heavenly!

It was a great night and I’m looking forward to his croissant and brioche night!  Needless to say, in order to make the above in the allotted time we did throw in a bit of yeast.  I recommend the evening to any budding bread-maker.

Next in my quest to work my way through Daniel Leader’s “Local Breads” is a buckwheat batard.  My newly found source of flour did not stock buckwheat flour, but I found some at Namaste Food & Spices and they even delivered to me at home – which is great since I still can’t drive.  Buckwheat is a low-gluten flour, but this recipe also contains wheat flour, so I was hoping it wouldn’t turn out to be the disaster that my spelt loaves were!

The starter was refreshed using buckwheat flour instead of wheat, but called for a lot of levain to kick it off – 300g levain / 35g water / 125g buckwheat flour.  This was far more starter than the recipe called for so I scaled it down somewhat.  The recipe was nothing special except for the 10% buckwheat flour used – 90% AP flour, 60% water, 25% levain and 3% salt.  Total flour weight 500g.  Interestingly the salt % is quite high at 3% - didn’t really notice it at the time.  It didn’t taste particularly salty, and there is only a relatively small % of starter in the recipe, so it’s not like the fermentation was going to race away and needed slowing down.  Gave it a couple of folds during its fermentation (about 4 hours) at RT.  Shaped it into 3 batards, and let proof in the oven with a dish of boiling water in the bottom (oven not turned on).  Learnt this trick at my bread-making course – imitates the environment of a proofer at the bakers apparently.  The proofing ended up getting away on me as was a bit fast - next time less hot water I think.  So unfortunatley I think the loaves were a bit overproofed.  Slashed them and baked in hot oven, with ice thrown in, for about 25 minutes.

The loaves browned in a completely different fashion to normal bread.  As the book said, they darken like fired pottery rather than the normal golden brown of a wheat loaf.

They did have a nice firm crust, even though they were a bit flat from overproofing.

The flavour wasn’t marked, but my friends all enjoyed them and thought they definitely tasted different – I’d make them again, if for no other reason than to use up the flour! (Sorry about the rubbish photos - my phone is all I have!)

So my thoughts on number 3 from the book - not an outstanding bread, but would try them again.

This looks like a recipe worth trying again:). My stomach is grumbling a bit after looking at the finished loaves!