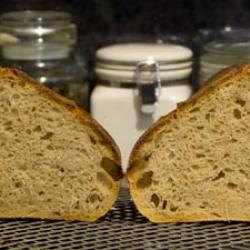 The same recipe as the last. By the 3rd stretch & fold it looked like the dough was nicely developed with its stringy internal texture. Ambient temperature was around 18°C during the S&F dough development.
Again, no real shaping due to the wetness of the dough just straight into the proving bowl after the last S&F, then into the fridge for an overnight retard. I didn’t get to bake the loaf in the morning and it wasn’t until around 16 hours later that it was going into the oven. It looked like a giant muffin as it was nearly overflowing out of the proving bowl!
The fun didn’t stop here. Due to its inflated state, it was very delicate and I didn’t want to deflate it. While I was trying to transfer it to the pre heated pyrex dish, my aim wasn’t so good and it caught on the lip. This meant I couldn’t put the top on it. The slashing went ok but then I some how managed to drop the in oven temperature gauge on top of the dough! Thankfully there was not much damage done and it was baked like the rest have been.