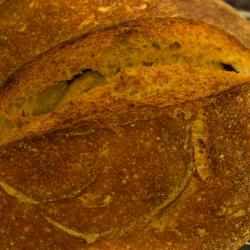 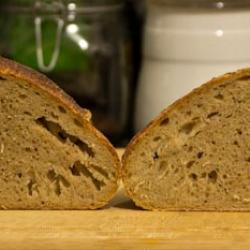 Flours & water mixed then rested for 10mins. Starter added, mixed then rested for 10mins. Salt added, mixed then rested for around one hour. Stretched and folded. I then repeated this for another three times with an ambient temperature of around 17°C in the kitchen. When it came to shaping, the dough had become larger (nearly double) but it felt very hydrated and was really hard to shape/tighten into a miche. I literally played “hot potato” with it and plopped it into the tea towel lined proving bowl that I use. It was then placed into the fridge to try an overnight retard/proof (around 7hrs) for baking 1st thing in the morning. Even though I had liberally dusted the proving tea towel with rye flour, it stuck to it in a spot about the size of my palm as I transferred it to the pyrex casserole dish for baking. I now have an in oven temperature gauge, what a treat! This was placed right next to the dish and showed an initial oven temp of 250°C. There was the two small dishes of boiling water flanking the baking dish below. I left the oven at max for a good 5mins as the dough was cold and flat with not much life to be seen. The slashes were poor and started to meld back up. Finally around the 10min mark the dough began to rise so I dropped the oven temp to 220°C. There it stayed till the 25min mark at which point I removed the lid and dropped it to 200°C. I checked the internal temp at the 30min mark and it showed that it was done both temperature wise and the lack of dough sticking to the probe. I turned the oven off but left it in the oven for another 10mins.

After leaving it to cool rapped in a tea towel on a rack over the day, the 1st cut in the centre showed a largely dense crumb with the odd elongated large holes on the outer walls. Further slicing (I cut & freeze) revealed a more consistent larger crumb as I worked my way towards each end.