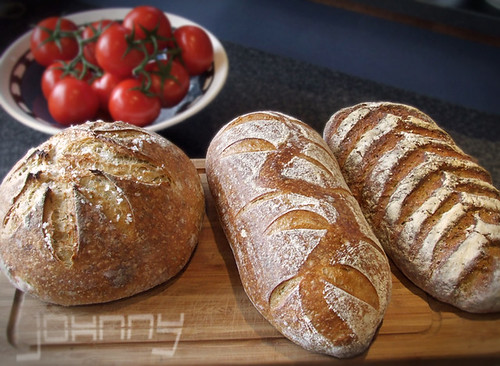 Last weekend we had friends over for dinner and I really wanted to show off my new sourdough bread making skills. So when planning the three course dinner I did a little research for recipes and planned on making three loaves. A different sourdough to go with each course. The night was very successful and all the food turned out great. I had heaps of praise for my bread which is now almost all gone, leaving very little for my lunch sandwiches during the week :(

Here is what we had for dinner and what I decided to bake for each course:-

A nice dense multigrain 47% Rye bread which was cut thin for pre-dinner nibbles. I basically followed Susan's formula over on Wild Yeast but with the substitution of 80g farmers mix of multigrain into the dough. 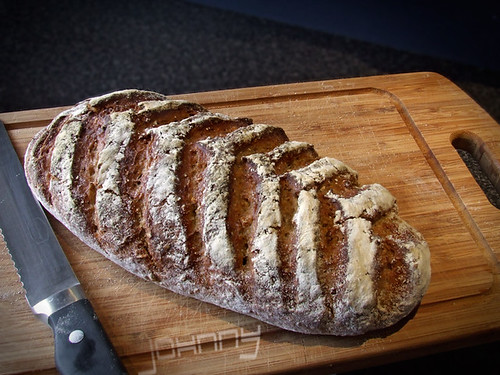 I baked this bread the day before so it could sit for 24 hours before cutting to hopefully set the crumb properly. We had this bread with a fine selection of condiments such as sweet fig & fennel jam, creamy King Island , NZ Blue Vein cheese, a sharp crumbly tasty cheddar, some sun-dried tomatoes, smoked speck and some dark juicy Australian grown, marinated Kalamata olives. 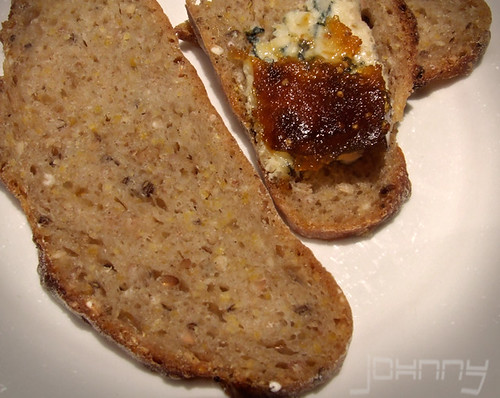 For the entree I wanted to make bruschetta so I baked a small standard white loaf of sourdough with 75% hydration and 20% wholemeal in the flour mix. Thick slices of this nice open-crumb bread were toasted on the grill and made the perfect base for the two types of bruschetta I chose for the evening. 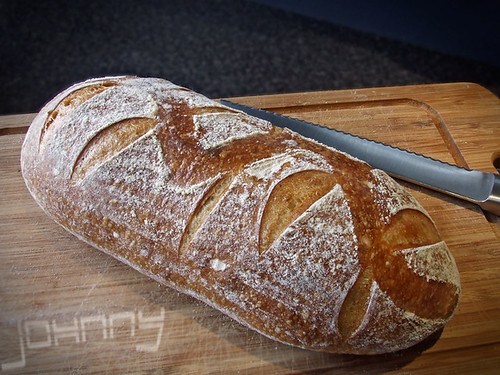 In my opinion sourdough makes the best bruschetta because it toasts so well and is dense enough to take a wet mixture on top without going soggy. I made the normal tomato one with beautiful deep red vine ripened tomatoes which were dipped in boiling water to remove the skin and de-seeded before being chopped and seasoned and mixed with a good olive oil and fresh basil. This wonderful mixture is chilled before being spooned onto the hot garlic rubbed sourdough slabs....yum! By the time I had returned with the second plate my dinner guests had polished off the whole first lot I had only put out 2 minutes before. The second bruschetta also really worked well with the sourdough and was topped with thinly sliced fresh fennel marinated in lemon juice and olive oil with blue cheese and baked cherry tomatoes. Recipe links for the classic tomato bruschetta here and the fennel, blue cheese one here. 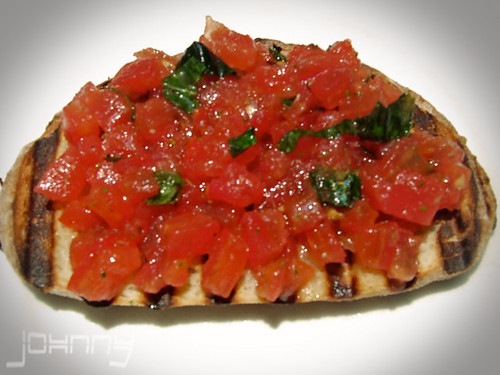 For the main meal I cooked a rich lamb dish which has the meat marinating for 24 hours in a bottle of wine. Now any recipe that asks you to pour a whole bottle of red into the marinade is my kind of dish. This is a recipe by Stephen Hitchings from the Treetops Restaurant at Eaglereach Wilderness Resort. It's called Seven Hour Lamb in Hunter Shiraz and the marinade and slow cooking produces a fantastically tender meat and rich intense sauce. To complement this dish we had baked vegetables and a fragrant Italian rosemary bread to sop up all that wonderful sauce. The bread is called a Panmarino and when I first read about it in Carol Field's The Italian Baker, the story of this bread was so interesting I just knew I had to adapt it to a sourdough and make it for my dinner party. 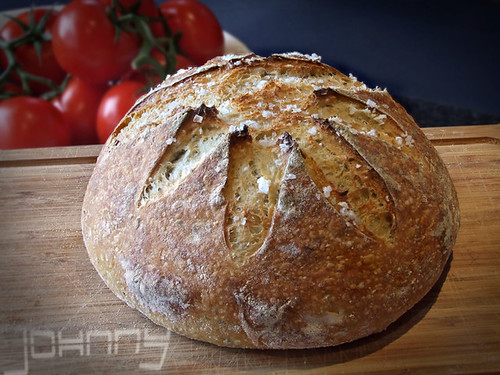 The story of Panmarino as told by Carol is that this bread recipe comes from a place called Ferrara near Venice and is the invention of a baker named Luciano Pancalde. Apparently years ago, Luciano was reading a biography of the d'Este family who once ruled Ferrara. He came across descriptions of the spectacular court banquets which featured a rosemary bread with a crust that "sparkled with diamonds". Of course, just like all good artisan bakers, Luciano experimented and baked until he came up with this wonderful aromatic, fresh rosemary fragrant, dome-shaped bread where you slash the top in the pattern of a star and sprinkle chunky crystals of sea salt into the crevices. 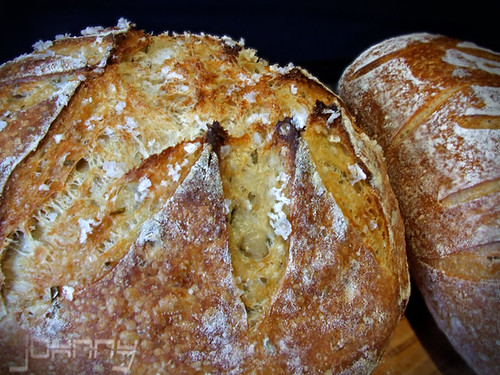 The salt really does sparkle like diamonds and from what I have read in those days only the rich could afford to be so extravagant with salt. Here is a link to a version of the recipe on Barry Harmon's Artisan Bread blog. When I get time I will post my adaptation of Carol Field's formula in the recipe section of Sourdough Companion. My version has a more open crumb than the original recipe. 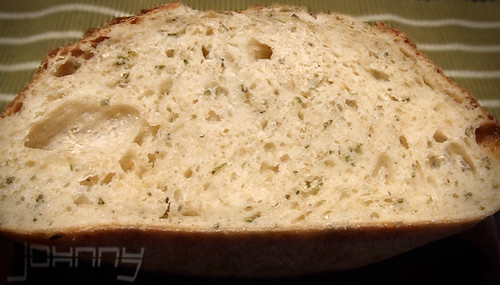 I know this was not baking with sourdough but these cookies added such a lovely  fragrant crunch to accompany the dessert I made. The dessert was a really simple but delicious vanilla bean yoghurt panna cotta with a fresh strawberry sauce and the rosemary cornmeal cookies. Here is the vanilla bean yoghurt panna cotta recipe I used and here is the rosemary cornmeal cookie recipe. 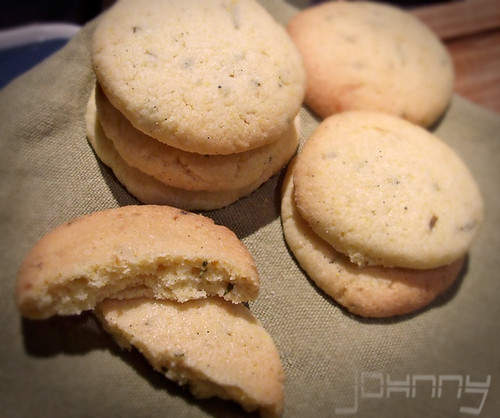 All in all it was a great night and it made me start thinking about baking for different courses and what might be other peoples ideas about the best breads to bake for eating with various foods. Has anyone tried to match their breads to the main course? What works best with fish? or chicken for instance? Could this be the next challenge?

Looks and sounds great.  When I tried a link for a recipe it didn't work.
Whoops...  fixed it :)
for the eyes and the tummy! Beautiful...just beautiful! Every loaf is a work of art.
Johnny, that's fantastic!  How did you get such wonderful definition in a 75% dough?  Please tell us, I'm the world's crappest slasher, so I'd love some tips!

Cheers, Celia
Thanks Celia,
Can't believe I'm giving out tips on slashes! I had been experimenting with dusting the top of my loaves with flour and using a stencil when I had an idea to try for a pattern that looks a bit like ivy leaves. I found I didn't really need a stencil and could get a similar effect with a wet thin pastry brush. So what you see is not all done with slashes.
You first dust your loaf then with a damp brush, paint a wavy line down the centre. This will be the stem of your ivy and will darken up during baking.  Then using a razor (or lame of choice) slash small lines in pairs on either side of your painted line. The slashes should be slightly curved as shown below. When the slashes open up during baking they look a bit like leaves on a vine.
Apart from that I don't do anything special. I try to just slice once with confidence and not fiddle with it if I get it wrong. It also helps to have cold dough to work on, straight out of the fridge, particularly when it is high hydration. Also I found that keeping the razor spotlessly clean and cooling it in the freezer just before I used it seemed to improve my cuts.
happy slashing... 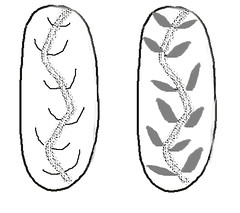 That all makes sense, and the wavy line in the middle is a nice touch - you're right, I thought that was a slash!  The trick might be cold dough from the fridge - mine is always soft and squidgy by the time I'm ready to bake.  I've never had much success with putting dough in the fridge - it always seems to develop a skin on it overnight?

Celia
THANK YOU!! So beautiful.
It just seems to work for me as I have always folded and shaped Friday night and popped the whole lot in the fridge overnight for baking Saturday morning. I put the bannetons & dough inside a sealed plastic bag to stop it forming too much of a skin, but I find a little bit of a skin helps with a nice surface to cut.
I have also found for me straight out of the fridge, turn out onto my peel, dust then slash and straight into the oven without letting the dough warm up gives me more oven spring.
Here is that ivy pattern I'm practising on a 20% wholemeal multi-grain white I baked this morning. This was a 76% hydration dough. 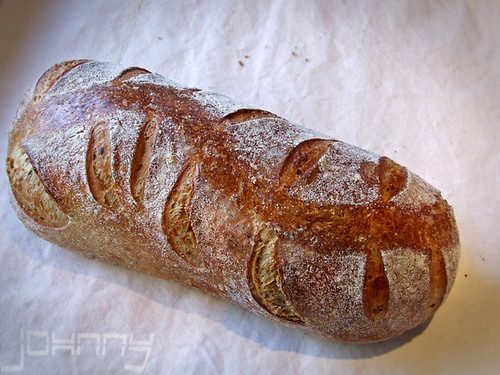 How irresistibly plumped up it is!

If there is fridge space, I like to park it overnight in the fridge too. Yes, I, too, find slashing easier with a slight bit of skin.