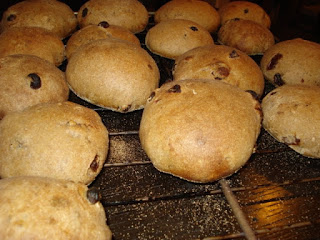 Not to long ago Grand Central Bakery in Portland OR sold raisin panini, but according to my brother in law who drove out to the bakery regularly just to pick them up, they stopped making them, so with that said I decided to create my own version of panini. In the process of my last bake I took 2 kg of the dough that was made for bread and convert it to panini dough. Since I was going for a healthier version of panini I used spelt based sourdough.

Soak your raisins in water for about an hour, then pat them dry with a paper towel, the reason for doing this is that they will have lots of water and it will make your dough to moist.

Mix your starter with water, add flour and salt mix, for 3 minutes.

Rest the dough for about 20 minutes in a bowl. 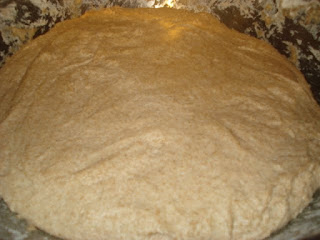 Take your dough and dump it on a counter add your raisins and walnut to it and knead for about 10 minutes you will have to adjust the dough by adding more flour to it, the best way to do this is by taking your hands and sticking them in to the flour and mixing the dough, this way the flour will be absorbed evenly, you might have to repeat this for few times until your dough is nice and elastic. 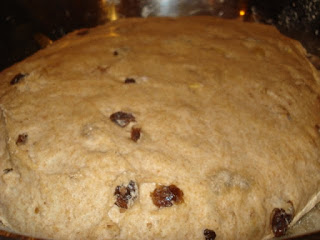 Place the dough back into the bowl, cover it with a tea towel and let it rise for 4 to 6 hours or until almost double.

Divide the dough into small rolls, just smaller than tennis ball size and let it proof for 1 to 2 hours. The best way to check if it's ready is if you use a finger press test.

Place in your wood fired oven, spray some water above it to create steam, close the door and let them bake for about 15 minutes. Don't forget that they are smaller and will bake faster than your bread so check on them after 10 or so minutes.

Let them cool and enjoy as a healthy desert, they are perfect with some cream cheese or some jam. 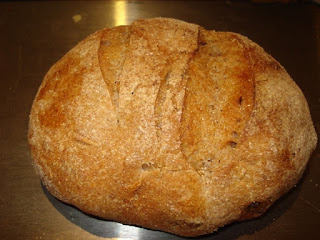 You can see of my bakes @ http://www.ourwholesomehomes.com