Baking in a Solar Oven 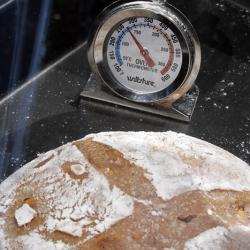 A friend of mine, Roberto, recently purchased a Solar Oven. It is a plastic gizmo that uses mirrors to collect heat from the sun.

Roberto invited me to try baking some bread. He warned me that the oven was designed primarily to work with 'surface heat' rather than store heat or create large air temperatures.

Nevertheless, we managed to get the air temperature up to 135 C on an Autumn day in South East Queensland (Australia) with intermittent sun.

In Summer, with full sun, we predicted that 180 C would be an achievable air temperature. That's still at the cool end of baking temperatures. For those not familiar with Celsius or bread temperatures, 240 C is a typical starting temperature for bread (temperatures are often reduced as the bake progresses).

This was my first bake from a recently developed starter/leaven, as featured in the first few weeks of CultureCam. And for Roberto it was the first time that bread had been attempted in his 3 day old oven. So it was quite exciting.

I decided to bake a small (about 300 g) loaf of pumpkin bread. It was a well hydrated (wet) dough, and in retrospect a drier dough would probably have baked better over what turned out to be 90 minutes of baking. That is a long time for a small piece of dough, but was not unexpected as the oven instructions said that you can expect to multiply most standard cooking times by a factor of 3.

It took 20 minutes for a small amount of condensation to appear on the perspex lid. After 40 minutes, condensation was heavy and dripping. The oven is a tightly sealed unit...so I was relieved when lots of moisture appeared (I didn't see how the bread could be baking without moisture leaving the dough).

The bread did bake eventually, after about 1.5 hours. At such low temperatures, we decided that the bread cooked more than it baked. However cooking sourdough under the power of the sun did give a sense of independence.

We joked that more solar ovens need to be made before oil is depleted and there is less plastic available to make them. At least there will still be plenty of hot rocks to bake on.

that's amazing Graham.  I've looked into solar cookers before but never seen one do bread!  I used to manage CERES Cafe in Victoria (www.ceres.org.au) which is located in an 8 hectare environment park in Brunswick.  CERES is currently undergoing some renovations which they are putting in a new restaurant that they believe is going to be the "greenest" restaurant in the world, and a solar cooker is one of the things they are installing (on the roof).  Though theirs is much bigger than the one you have here, it's based on designs from india.  They are also putting copper piping behind all the stainless splashbacks in the commercial kitchen, which will have cold water pumped into one end, then through the splashbacks then feeding the dishwasher, so that the water is hot by the time it goes in.  There's so many other plans, it's an amazing place if you're ever down that way.  Worth a look.

Anyway, bit of babble.  Love the story of the cooker!  Very funny realisation about the plastic too!

i live in indonesia (your neighbour)....but i never heard about this solar oven before...

in indonesia we get heat from the sun almost through all the year (but we never used it to oven the bread).

it should be a very great idea to be apply here in indonesia..

I would think that the answer to low air temperatures in a solar oven lies in the over all design. A solar collector could direct heat to an absorbing heat sink at very high levels. Once a thermal mass is heated, air blowing over the heat exchanger (again powered by the sun) could create  a convection type environment. Glass would be my choice for transparent materials.

I just came in from setting up my Global Sun Oven for the first time and found this post. How ironic is that? Anyway, one of the reasons I went with an "oven" rather than one of the other types of solar cookers available is because of the ability to bake bread in it. I have no idea how it will work, but am excited that this would give me a way to bake bread in the summer. (My oven makes the kitchen WAY too hot to use in the summer.) Most people average 300-350F in this unit, which is low for bread, but will still bake it. We'll see how it comes out.

For anyone wanting to experiement with a solar cooker without a big investment, there are lots of plans on the internet for making them out of cardboard boxes.

I was wondering if you could install some ceramic tiles (non glazed) in the solar oven and let it get very hot, 1-2 hours prior to cooking. The heat mass accumulated in the tiles or bricks would perhaps allow you to get higher temperatures and achieve faster baking. Perhaps it’s worth a try.