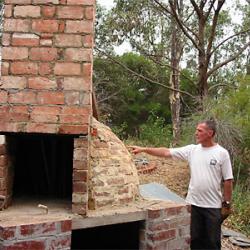 John Downes started the modern sourdough movement in Australia, circa 1978 at Feedwell, in Greville st Prahran (VIC). John was the original owner of Natural Tucker Bakery, Firebrand bakery and the Newrybar Bakery. Because of John, Australian's began their journey in style: 100% sourdough made with organic flour.

If the mega bakeries had introduced sourdough first, we would have been eating San Francisco sourdough before Melbourne, Sydney or Newrybar sourdough. Because of John, new entrants to the "sourdough" category are rated on a scale from "0" (chemical dough flavoured with packet acidifiers) to "100" (an organic dough ripened with spontaneous leaven).

Of course the scale doesn't actually exist, but perhaps it should, or at least that was a topic of our conversation. I had approached John to help me with a perspective on what constitutes "Australian Sourdough". If anyone would know, he would. Anyhows, the man is passionate about the responsibility of bakers to clearly identify what is in their bread. I agree that it is ridiculous that bread-eaters have very little idea about what they are eating.

This wasn't some half-baked anti-commercial-yeast-in-sourdough conversation. There are excellent bakers out there...artisans...making a style or variant of sourdough that uses commercial bakers yeast in the process. The results are far superior to any straight yeast breads. Problem is the bread is simply labeled as "Sourdough". It is not straight sourdough. It is yeasted bread with a sourdough twist.

John said that he had looked at ways of regulating what can and can't be called sourdough (as in France), but there were powers stronger than he. In fact his lobbying in the earlier days led to a rift...and withdrawal of subscription...with one of the bakers groups in NSW. John and I agreed that there were other ways of promoting, (branding) sourdough as sourdough, and that is something we could work towards.

Bakers who worked with John are many, and a good few still practice in and around Melbourne. Of course bakers are born to be bakers but working the dough with John must have embedded a stubborn rejection of compromise. These bakers live the rhythm of sourdough and refuse to modify that rhythm to any great extent. The sourdough has a controlling interest, rather than being forced to conform by bakers working with chemical, mechanical and other controls.

John is currently making handcrafted wholefood cereal at the Original Cereal Company. John bakes in a woodfired oven he built himself and is extremely happy with its performance . His bread varieties include the classic Casalinga, Wholemeal and John's own Barmbrack (Irish fruit bread). John Downes is an accomplished author (Natural Tucker, The Natural Tucker Bread Book and Soy Source) with another book or two on the horizon.


Articles on Sourdough and Artisan Baking

happened upon an article you did on sourdough...where can i buy the closest thing??

I'm a baker who wishes to open their own bakery (recently worked at a restaurant where, amongst other duties, I was responsible for baking the bread and am currently working at a sourdough pizza place) and am very interested in making barm-leavened bread, though I'm not quite sure where to start with the process.  I remember listening to an interview with you on the food programme and thought I'd contact you about the subject.  I'm based in Manchester and would like to use the process to make barm cakes and breakfast wigs..  Could you recommend any books on the subject, somewhere I could start researching?

Many thanks and best wishes,

Hi Mike, sorry for some reason I missed your msg.

Would be glad to help with the barm if you are still interested?

My names Domenica and I'm based in Melbourne.

I'm currently writing my thesis on the history of bread making in Australia.  In particular I'm focusing on the social and intangible qualities associated with bakeries.

I've read a lot about your work and would love to get in touch if you would consider answering a few questions on the topic.

My name is Lachie and I'm a baker from Perth. I am also super interested in the history of bread in Australia and would love to hear more about your thesis and/or be reccomended some resources. Also happy to talk bread and share anything I know that is helpful. I know some old timers in the industry over here that may have info to share too. I hope John got in touch with you - I met him briefly at Grainz last year and he has a lot of knowledge.

Hope the doc is going well in any case.