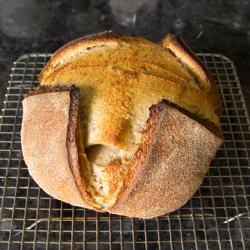 I used the same white/rye recipe that I’ve used for the last couple. I really like the taste and it’s been an easy dough to work with.
This loaf came out with a tighter crumb than others. It also has fold lines through it. Is this because the bulk ferment was too long and there was no food left for during the proofing stage? Bulk ferment was over night at ambient temperature with shape and proof stage early the following morning. The dough felt lively and pushed back with the poke test after bulk ferment, though the proof was potentially too long, {3 hours – I woke early, shaped, then went back to bed:)}.
I tried the staged oven temperature bake as suggested on my post of loaf #9 to a degree. My oven temperature dial is not the most precise one you’ll find. At the moment I’m using an infra red surface temperature measuring device and have an in oven gauge on it’s way. The infra red device shows just how much variation there is inside and also the fluctuation between when the thermostat kicks in and out for a given set temperature.
The crust is less coloured and is softer. The loaf was covered for 20mins of the 35min bake time and there was two small steam bowls in there the whole time.